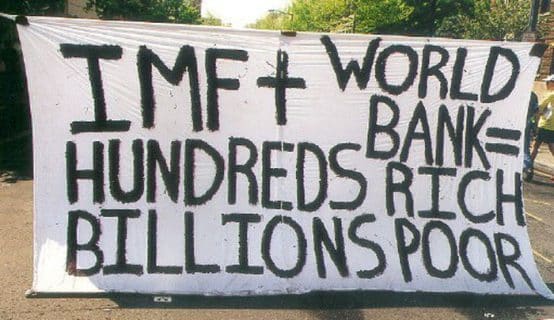 2015 was an important year for the development community with several high-level summits scheduled, including events related to key climate change agreements and the development of the successor to the Millennium Development Goals, the Sustainable Development Goals.  In the post-financial crisis environment, previous doubts about the relevance of the IMF seemed to have been cast aside, with discussions shifting instead to the expansion of its role. On the other hand the supposed diminished role of the Bank continued to be much discussed. Concerns about the leadership and the prolonged restructure led the Bank to strengthen its efforts to demonstrate that it remains an important player by inserting itself prominently in UN-led processes and by touting its cooperation with other Multilateral Development Banks (MDBs), including its supposed Chinese rival the Asian Infrastructure Investment Bank (AIIB).

In what was termed the ‘year of development’, due to a series of major international summits taking place, the World Bank came under increased pressure to demonstrate its relevance, not least as the Asian Infrastructure Investment Bank (AIIB) was formally established, with many of the World Bank’s major stakeholders lining up to join. In response, the Bank initiated a ‘Forward look’ process, due to culminate in 2016, but perhaps more significantly it started aligning itself closer than before with other Multilateral Development Banks (MDBs) to influence the international agenda. A ‘flagship’ paper, From billions to trillions, was released for the April spring meetings outlining how the MDBs and the IMF can support the Financing for Development (FFD) agenda and the Sustainable Development Goals (SDGs) by leveraging private sector finance.

From a civil society perspective, the Bank’s social and environmental safeguards review continued to dominate interaction and concern. The year didn’t start well, as a highly critical internal Bank review of its resettlement policies was released shortly before the April spring meetings, forcing Bank president Kim to admit that the Bank’s record on dealing with resettlement was a cause of “deep concern”. The findings of the resettlement review were released just after the second phase of the safeguards’ consultation process, leading to suspicions that the Bank had deliberately delayed its publication so that they did not influence the outcome of deliberation on the safeguards. CSOs continued to call for stronger recognition of human rights by the Bank, which was backed up in a damning statement in a new report by Philip Alston, the UN rapporteur on extreme poverty and human rights, released prior to the October annual meetings, where he argued that the World Bank “treats human rights more like an infectious disease than universal values and obligations”.

The findings of the resettlement review were particularly significant in the context of the Bank’s continued ‘big push’ for mega infrastructure projects, where, as even president Kim acknowledged, resettlement is often unavoidable. On this front the Bank is also raising its profile through closer collaboration with other MDBs, including through a joint MDB September document for the G20. Infrastructure is one of the focal points for the Bank’s push for public-private partnerships (PPPs), which despite a number of concerns, including potential negative impact on poor people, continues to take center stage.

The World Bank and IMF annual meetings returned to Latin America for the first time in nearly 50 years, with Peru as host, and local civil society gearing up with an alternative platform. Top of the agenda was a paper outlining the Bank’s self-proclaimed leadership in implementing the SDGs, but beneath the surface the event was the initial stages of attempts to boost the Bank’s profile and relevance in light of the upcoming replenishment round of its low income arm, the International Development Association (IDA), and the ongoing Bank shareholding review.

Towards the end of the year, as the 21st conference of parties (COP) of the UN Framework Convention on Climate Change (UNFCCC) in Paris approached, the World Bank continued its efforts to boost its influence within climate finance circles, including through a call to “decarbonise development”, however the Bank’s rhetoric was not matched by proposals for genuine solutions. Meanwhile the Bank continued to support fossil fuels, with funding for a Kosovo coal power plant still under consideration.

Throughout the year global civil society sought to temper the enthusiasm among IFIs about the potentially catalytic developmental role of the private sector evident in the FFD documents and in the preparation of the SDGs. CSOs expressed concerns about the dangers of an over reliance on the private sector to deliver essential services and the presumption that it will forego its profit-seeking objectives in the name of equitable development. CSOs also highlighted that the reliance on private sector provision of essential services may conflict with the human rights obligations of states.

During the year the IFC continued to aggressively pursue its investments in financial intermediaries (FIs) despite sustained concerns raised by affected communities and civil society about the potentially serious negative human rights and environmental consequences of these investments. In particular civil society pressed the IFC for greater disclosure of FI investments, stressing that without the transparency provided by appropriate disclosure, community members cannot hold the IFC accountable for its actions. Ahead of the April spring meetings in Washington a group of CSOs released a report titled “The suffering of others”, which received significant media coverage, detailing the negative impact of IFC investments in five communities.

The 2015 year of UN summits, culminating in the adoption of the SDGs in September, dovetailed into the IMF’s efforts to cement its status as a leading global institution on a number of fronts. This included gender, climate, inequality and tax, where the IMF sought to define the macro-economic relevance and significance of the SDGs. In particular the July Addis Ababa summit where the UN’s FFD negotiations were finalised provided a platform for the IMF to assert its confidence in its own importance to the current and coming global challenges, as we highlighted following the 2015 spring meetings.

At the outset of 2015 the Fund was keen to reposition itself to displace institutional rivals, such as the OECD, from leadership on tax policy relating to base erosion and profit-shifting (the BEPS process which tax justice advocacy has focused upon). The Fund was meanwhile rather downplaying CSOs’ and others’ concerns over a stalling global economy, in particular the possibility of heightened debt risks in developing countries, though it had no compunction about trumpeting its own and the Bank’s speedy response to the Ebola crisis that had gripped west African nations since 2014. This was coupled with IMF research that led eyebrows to be raised given it seemed to question some long-established IMF policy positions. The research suggested for example that inequality may not be good for growth, nor discrimination or exclusion such as, for example, gender-based exclusion from the labour force.

Notwithstanding research on non-traditional social and sustainability questions, the IMF was not changing so drastically. For example the ITUC revealed how little of the Fund’s inequality rhetoric was achieved in practice, and in our winter 2015 Observer, Hassan Sherry of the Arab NGO Network for Development showed how problematic the IMF’s favoured ‘solutions’ continue to be. Also in the real-world, the IMF seemed to embrace its fellow Troika creditors’ desire that Greek citizens’ democratic aspirations in January’s anti-austerity election victory would be quickly extinguished. Despite re-election in summer of the anti-austerity government, by the end of 2015 we saw no economic progress, instead retrenchment, and the Greek state meanwhile also had to handle being on the front line of an accelerating humanitarian crisis.

One tangible thing that was achieved, in the very last days of 2015, was the approval of the governance and quota reforms of the IMF that had been agreed just over five years previously. Instead of sheepishness at the very modest changes that took so long that the subsequent reform round (every 5 years) is already overdue, these were hailed by the Fund itself and its major shareholders – whose massively disproportionate sway over IMF decision-making is barely altered – as crucial to both the Fund’s continued “legitimacy” and to securing the necessary financial firepower for future lending challenges. The Bank also embarked in 2015 on its own governance and shareholding review, but in a far more challenging context than the self-confident and empowered IMF. Rather than go bold and embrace its own 2008 Voice reforms’ three objectives of 1) voice as shareholding, 2) voice as responsiveness, and 3) voice as effective representation at the board, the Development committee described the nascent process as occurring within a “complex context”.