Do the Results Match the Rhetoric? An Examination of World Bank Gender Projects 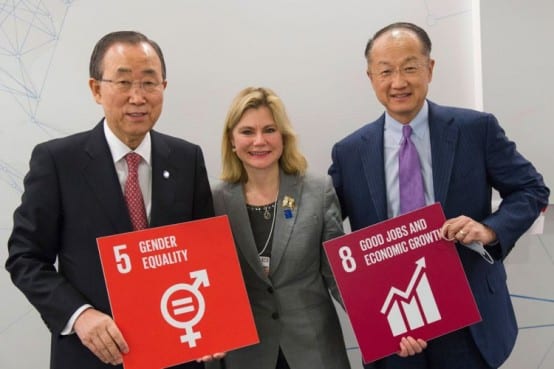 In January the UN announced a first ever high level panel (HLP) on women’s economic empowerment at the World Economic Forum in Davos. Members of the panel include the leaders of the IMF and World Bank, Christine Lagarde and Jim Yong Kim respectively, as well as Luis Guillermo Solis, President of Costa Rica and UK international development secretary, Justine Greening. The panel’s role is to propose recommendations on how the Sustainable Development Goals should be implemented to achieve women’s economic empowerment.

In a March article in UK newspaper The Guardian, civil society called on the panel to recognise structural barriers facing women, such as unpaid care and lack of decent work. The article quoted Ann Kargbo, head of Rehabilitation and Development Agency, a Sierra Leonean NGO working on gender equality, who highlighted the importance of women taking control of what they earn: “We need to know who owns the resources, who controls the resources and who makes decisions on the utilisation of resources.”

The involvement in the HLP is one example of the Bank and the Fund’s enhanced rhetoric in recent years on the importance of gender equality. On international women’s day in March, originally conceived by working class women organising for radical social change, the Bank website featured more than 73 posts showcasing its work on gender. These included Kim’s twitter feed naming Lagarde as a woman that inspires him, and the International Finance Corporation (the Bank’s private sector lending arm) initiative for trading floors around the world to ring their bells for gender equality.

We need to know who owns the resources, who controls the resources and who makes decisions on the utilisation of resources.Ann Kargbo, Rehabilitation and Development Agency

The IMF celebrated international women’s day by launching three new studies. Under the heading “doing it all – women boost the bottom line for home, firm and country”, Lagarde explained that women need to work more “to improve the bottom line”, while calling on women “not [to] be submissive” at Dubai’s Global Women’s Conference in February.

In February, the Bank’s headquarters received an Economic Dividends for Gender Equality (EDGE) certification, a standard for gender diversity at the work place. However, the Bank attained the lowest of three possible certifications EDGE provides, meaning the Bank “makes a public commitment to a strong gender balance [at the workplace]” and “identifies the parameters of a concrete action plan to further its progress”. The second level of certification requires that “the company has already implemented a framework for change and achieved significant milestones”. The certification the Bank attained is not based on Bank project impacts on gender equality nor the new 2016-2023 gender strategy released late last year (see Observer Winter 2016).

Figures from the US-based think tank the Center for Global Development’s March paper Do the results match the rhetoric? An examination of World Bank gender projects, raises doubts about the rhetoric. It demonstrated that out of the 1,666 Bank projects funded between 2009 and 2014, only 27, or 1.6 per cent of total projects, focused specifically on gender and contained measurable gender indicators and targets.

In a February article in The Guardian, Elaine Zuckerman of US-based NGO Gender Action, pointed out that the World Bank continues to deny demands of civil society for a stand-alone gender safeguard, as it concludes the review and update of its social and environmental safeguard policies (see Observer Winter 2016).

According to Francesca Rhodes of NGO Oxfam GB, the IMF has so far limited its gender work mostly to research, with almost no impact on institutional policy (see Observer Winter 2016). She argued that the research’s approach to gender equality is limited and instrumental, leaving out crucial components, such as social protection measures and ignoring structural societal barriers to equality such as women’s disproportionate unpaid care burdens. Rhodes concluded that women’s true economic equality “will only be achieved within a broader transformation in the way economic resources are governed”.

Do the Results Match the Rhetoric? An Examination of World Bank Gender Projects