Will the IMF "make history" with a new view on capital flows? 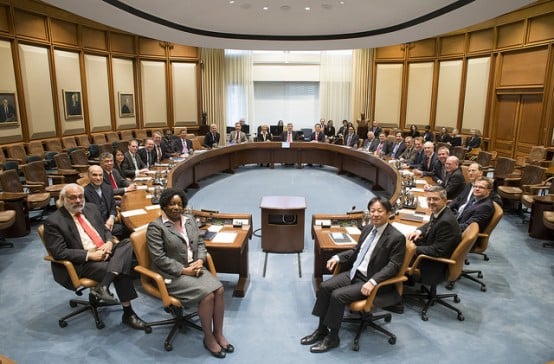 A February IMF policy paper on the international monetary system (IMS), although not endorsed by the Fund’s board, considered Fund policy on capital controls and suggested a possible review of the IMF’s ‘institutional’ view on the liberalisation and management of capital flows, the document on which the Fund’s advice on the issue is based (see Update 83).

The policy paper Strengthening the international monetary system – a stocktaking examines the challenges facing the international monetary system and presents “a possible roadmap for further work on reform areas.” The authors highlighted a shift in “the centre of economic gravity” to emerging markets and developing countries; increased financial interconnectedness and volatility; slowing growth in China; and falling commodity prices. They emphasised that non-economic risks pose new and unknown threats. In light of these shifts and the subsequent risks the paper asserted that “possible reform avenues could aim at strengthening crisis prevention and global mechanisms for adjustment, cooperation, and liquidity provision.”

The paper did not suggest a new policy on the use of capital controls but in a reference to dollar dominance and its impact on emerging economies, noted that “some countries have responded by introducing capital flow management measures [CFMs], although not all have been successful”. It went on to claim that “there is still limited knowledge of which types of CFMs are most effective, when their benefits could outweigh their costs”.  At the press release launching the paper, Siddharth Tiwari, IMF director of strategy, policy and review, gave an overview of the process going forward. It will involve an assessment of the current state of global capital flows; countries performance with regards to applying the ‘institutional view’; and a review of the ‘institutional view’ towards the tail end of 2016.

Following the inclusion of China’s yuan in the IMF’s currency basket in 2015 (see Observer Winter 2016),  managing director Christine Lagarde called in February for “clarity and certainty” regarding China’s ongoing use of capital controls. However, instead of phasing these out, in March China’s central bank announced the introduction of a ‘Tobin’ tax on foreign exchange transactions in order to combat currency speculation, while at the same time reiterating their commitment to fiscal reform to ease fears that they are yet to bring capital outflows under control. The rate of the Tobin tax will be kept at zero whilst the central bank refines the rules. China has also announced that as current chair of the G20 it will resurrect discussions on CFMs and structural changes to the global financial architecture.

The IMF’s ‘institutional view’ on capital controls is that they can serve to protect economies when capital inflows pose a systemic risk. Civil society has long criticised the IMF’s stance for placing the greater regulatory burden on the shoulders of emerging economies who are taking action in response to speculative finance from advanced economies (see Update 81, 83). Adopted in 2012, the ‘institutional view’ concedes that “there is no presumption that full liberalisation is an appropriate goal for all countries at all times”, but nevertheless concluded that “countries with extensive and long-standing measures to limit capital flows are likely to benefit from further liberalisation in an orderly manner.” The Fund favours macroeconomic adjustment methods to bolster currencies, such as exchange and interest rate changes or the use of reserves, but it maintains that their use should be temporary, targeted and transparent.

A February IMF working paper What’s in a name? That which we call capital controls, questioned why, despite the fact that “[CFMs] potential usefulness for managing the risks associated with capital inflows has gained greater recognition in recent years … they are still viewed with considerable suspicion and deep misgivings over their use.” The paper suggested, firstly, that controls on inflows and outflows have been conflated, noting that controls on outflows are “typically associated with autocratic and repressive regimes preventing capital flight; governments trying to prop up failed macroeconomic policies; and financial crisis.” Secondly, the paper observed that capital controls were viewed as incompatible with free trade and that they fell out of favour alongside the rise of free market ideology in the 1980s and 1990s. Finally, the paper noted that “advanced economies relied on inflow controls as their financial markets developed, and in most cases abolished them for reasons that do not necessarily apply to today’s emerging markets.”

Will the IMF "make history" with a new view on capital flows?