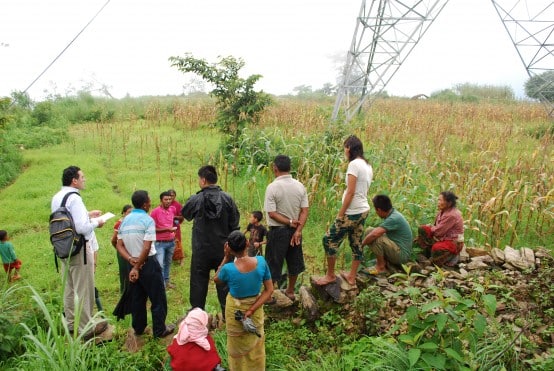 Communities meet with the Inspection Panel during the investigation. Credit: Komala Ramachandra

by Shankar Limbu and Komala Ramachandra

In mid-February the government of Nepal declared an energy crisis and began importing electricity from India in the hope of ending the daily power cuts of twelve hours or more in the capital of Kathmandu. In an accompanying policy, the “Electricity development decade”, the government announced ambitious plans to bring over 900 MW of new hydropower online in the next two years and ultimately export excess production to India.

Power production and transmission projects in Nepal have historically experienced long delays. Poor community engagement, corruption, and the resulting conflict account in part for these delays. Furthermore, it is feared that many planned hydropower projects will have adverse impacts on indigenous peoples’ lands, affecting not only their livelihoods but also their cultural identities.

The World Bank-funded Nepal Power Development Project, which included the controversial Khimti-Dhalkebar 220 kV transmission line (KD line), was approved in 2003, however, construction did not begin until 2008. Affected communities in Sindhuli District began to voice concerns in 2009, forming a local committee to address concerns the following year and even bringing a case before the Supreme Court of Nepal in 2013 (see Observer Spring 2014). In the long-standing conflict over the KD line, affected communities have prevented the completion of eight electricity towers in Sindhuli District due to concerns about lack of information and consultation, inadequate due diligence, problematic rehabilitation measures, and the potential impacts of the transmission line on health, agriculture, and livelihoods. A history of violent repression against these communities, including a brutal attack on women protesters in 2012 by state security forces, contributes to an atmosphere of fear.

World Bank management ... failed to explain why a project was carried out when it became clear that compliance with safeguard policies could not be ensuredShankar Limbu and Komala Ramachandra

In 2013 a group of affected families filed a complaint to the World Bank’s accountability mechanism, the Inspection Panel (IPN). The IPN conducted an investigation and found that the World Bank had failed to follow a number of its social and environmental safeguards with respect to affected communities and supervision of the project. World Bank management conceded that communities were neither adequately informed nor consulted about the KD line, in part, it claims, due to the security situation caused by Maoist insurgency in the region, but they failed to explain why a project was carried out when it became clear that compliance with safeguard policies could not be ensured. The Panel’s findings also included violations of Bank policies on assessment of alternative project designs, involuntary resettlement and compensation, and the provision of a local grievance mechanism.

According to the IPN’s report, the Bank further failed to properly assess whether the implementing agency, the Nepal Electricity Authority (NEA), had the capacity to carry out the environmental and social assessments required for project implementation under Bank policy. The NEA is currently managing various hydropower projects across the country, with support from the World Bank and other development finance institutions, as a critical part of the Nepal government’s initiative to make the country a net exporter of energy. The NEA’s and the World Bank’s capacity to engage communities as partners in development, rather than impediments to it, will define the success of Nepal’s energy policy.

By the time the IPN concluded the KD line investigation in February 2015, the World Bank had completed the Nepal Power Development Project. In response to the IPN’s findings, Bank management presented an action plan in March 2015 meant to address the non-compliance findings. The World Bank board reviewed the IPN’s findings and the Bank’s action plan, and “welcomed the Bank’s intention to continue engaging with the Nepalese authorities to support implementation of the management action plan, with a view to amicably resolving the outstanding issues.”

The communities welcomed the board’s encouragement to find a peaceful resolution to the issues, which they have been seeking since they first raised their concerns about the KD line. However, they contend that the action plan falls short on many counts. For example, the plan does not offer solutions for meaningful consultation with affected communities nor an assessment of alternative routes for the transmission line, even though the lack of these was found to be in violation of the Bank’s safeguards.

Putting into action the request of the board to amicably resolve the conflict will require the Bank to bring together its client, the NEA, and affected communities in a fair dispute resolution process. Such a dialogue process entails freedom from unreasonable conditions and intimidation, and the assurance that resources will be available to both support an unbiased process and also the agreed upon outcome. The World Bank has a unique opportunity to remedy its part in numerous safeguard breaches, to prevent future and potentially grave human rights violations in its projects, and to take a leadership role in building positive and inclusive development outcomes in Nepal.

To overcome the current energy crisis in a timely manner while respecting the rights of affected communities, the government of Nepal and supporting institutions like the World Bank must ensure positive community engagement, both in past and future projects. In its quest to develop Nepal’s vast hydropower potential, the government continues to place a heavy burden on rural and indigenous communities. Conflict over energy projects threatens to derail economic development efforts. Therefore, resolving past conflicts over energy projects and creating a positive example of community engagement will be vital in setting the tone for development projects moving forward.