Public-private partnerships and the 2030 Agenda for Sustainable Development: Fit for purpose? 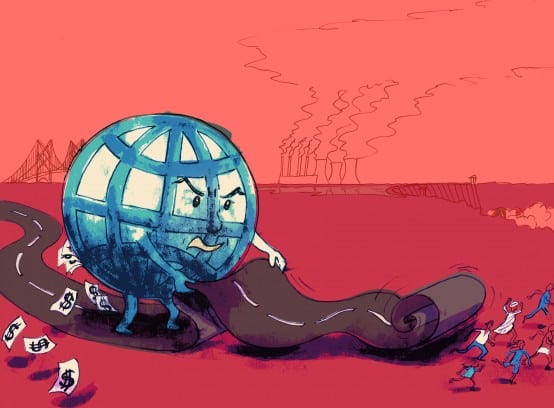 In the July 2015 UN Financing for Development (FfD) conference the multilateral development banks (MDBs) were asked to lead the establishment of a Global Infrastructure Forum “as a key pillar to meet the sustainable development goals”. According to the FfD outcome document, the forum should meet periodically “to improve alignment and coordination among established and new infrastructure initiatives”, with a particular focus on allowing developing country voices to be heard. Furthermore, the forum “will highlight opportunities for investment and cooperation, and work to ensure that investments are environmentally, socially and economically sustainable.” The first forum is scheduled to take place during the World Bank and IMF spring meetings in mid-April in Washington DC. The agenda for the one-day meeting includes a focus on mobilisation of private finance and on blending public and private roles in infrastructure management and finance. A report from the forum will be presented to an FfD meeting taking place at the UN the following week. The Bank has stated that it is hoping to hold the forum every year.

The MDB’s commitment to the forum follows longstanding work on scaling up infrastructure through the G20 (see Observer Autumn 2014). This commitment was further reinforced in a September joint document, Partnering to build a better world: MDBs’ common approaches to supporting infrastructure development, which responded to a request by the G20 for the MDBs to strengthen project preparation facilities “to leverage greater private sector investment in infrastructure.” According to Nancy Alexander of the German political foundation Heinrich Böll: “The G20 sees massive infrastructure investment as one of the ‘silver bullets’ that can … add $2 trillion to the global economy and create millions of jobs” (see Observer Winter 2015). Besides hosting the new forum, the World Bank continues to play a leading role in the preparation of key documents on infrastructure for the G20, including in infrastructure project prioritisation and in support of the implementation of public-private partnership (PPP) projects.

The August document outlines several other MDB activities going forward, such as “how to make best use of their business model to increase available funds” in order to finance the infrastructure needs of developing countries. This includes “combining and leveraging the concessional windows in innovative ways without reducing funding for the poorest countries.” At the World Bank this led to a November proposal to leverage capital from its low-income country grants and concessional loans arm, the International Development Association (IDA), through a “scale-up facility”, which will make available up to $5 billion in non-concessional lending to IDA countries. Resources will in the first instance be allocated on a regional basis, with country level funding caps taking into account issues such as debt sustainability considerations. An indicative list of funding demand shows that over 90 per cent are for infrastructure projects, including the controversial Inga 3 hydropower project in the Democratic Republic of Congo (see Observer Spring 2015, Bulletin May 2014) and the contested Kosovo coal power project (see Observer Winter 2016, Autumn 2014). Moreover, infrastructure featured strongly in a strategic document prepared for the first meeting of IDA’s 18th replenishment round in mid-March. However, the document noted mounting debt risks following non-concessional lending stating: “IDA’s work to help countries build capacity to manage debt in partnership with the IMF is more important than ever, with an increased heterogeneity of country situations, more development finance being provided in the form of loans and IDA countries’ increased access to capital markets.”

Troubled megaprojects are colliding with environmental and social realities around the worldNancy Alexander, Heinrich Böll Foundation

The decision by the World Bank, together with the G20 and other MDBs, to push PPPs for infrastructure projects as a fait accompli runs counter to continued concerns (see Observer Autumn 2015). A February working paper from the UN’s Department of Economic and Social Affairs titled, Public-private partnerships and the 2030 Agenda for Sustainable Development: Fit for purpose?, argued that “while greater private sector responsibility will reduce public sector risk exposure by default, a badly designed PPP of any type can carry significant risks for the public in terms of reduced coverage, poor quality of service, or contingent fiscal liabilities.” Moreover, the paper noted that evaluations done by the World Bank, IMF and the European Investment Bank “have found a number of cases where PPPs did not yield the expected outcome and resulted in a significant rise in government fiscal liabilities.” According to the paper “analyses by both the IMF and World Bank have expressed concerns regarding perverse incentives on the part of governments to treat PPP contingent liabilities as ‘off balance sheet’, which in turn undermines sound fiscal management.” While a January IMF working paper mapping contingent liability realisations in advanced and emerging markets for the period 1990–2014 found few PPPs qualifying for inclusion in the data set, it warned that “the number of PPPs has only recently started to increase significantly globally. We might thus expect more and larger fiscal costs from PPPs in the future.”

A late February NGO submission to the World Bank consultation on a proposed framework for PPP disclosure, drafted at the request of the G20, raised concerns that the consultation happened after, rather than before, the draft document was submitted to the G20. The submission, signed by over 50 organisations, argued that this “may project the impression that consultations with other stakeholders are a mere formality devoid of a real chance of impact.” The organisations, including the Kenya Debt Relief Network and Debt Justice Norway, emphasised that “a robust framework for disclosure is a primary and necessary – even if insufficient – safeguard against some of the risks raised by PPPs … The need for such safeguards is particularly acute in the light of the G20’s recent policy decisions to encourage so-called ‘transformational’ projects, which we understand as increased support for megaprojects.” Risks identified related to “social and environmental impacts, respect for human rights, democratic accountability and macroeconomic problems, including hidden public indebtedness arising from PPPs.”

Aldo Caliari of US-based NGO Center of Concern commented: “The G20 is putting the cart of ideology on PPPs ahead of the horse of available evidence on their performance. Nothing good can come out of that.” Nancy Alexander added: “Troubled megaprojects are colliding with environmental and social realities around the world. It is crucial that citizens’ groups analyse the infrastructure master plans for their country or region to determine whether the plans will advance sustainable development and climate goals, and what risks are being absorbed by the public sector.”

Public-private partnerships and the 2030 Agenda for Sustainable Development: Fit for purpose?