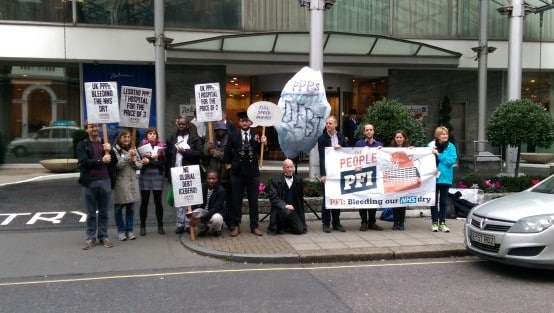 According to the World Bank public-private partnerships (PPPs), a catch-all term used widely to indicate investments involving both the public and private sectors, are now responsible for 15-20 per cent of infrastructure investment in developing countries.

PPPs are usually contracts where the public sector provides guarantees to the private sector, often meaning that the private sector can make profits whilst risk remains with the public. Many of these guarantees create real costs for the public sector from the start of the contract, such as agreeing to pay a certain annual amount for a hospital. Other costs will be contingent liabilities, where the government guarantees payments if revenues do not meet a certain level, for instance by a government topping up payments to an electricity producer if revenues have not met the contracted amount or if a debt is defaulted on.

The UK government was one of the trailblazers for a form of PPP where the private sector undertakes an investment in major infrastructure, such as schools or hospitals, and the government guarantees payments for its use for several decades. These forms of PPPs have the same financial impact as a government borrowing directly, but the payment obligations are not included in the state’s debt figures. This enables debt payments to be hidden from the public view.

The cost to a government of using PPPs to invest is usually higher than if it had simply borrowed the money itself. This is because private sector borrowing costs more, private contractors demand a significant profit, and negotiations are normally weighted in the private sector’s favour, particularly when government familiarity with and capacity to develop favourable PPP contracts are weak, as is often the case in developing countries. A 2015 study by the World Bank’s Independent Evaluation Group found that of 442 World Bank-supported PPPs, no more than three per cent were assessed for their fiscal impact on the country involved.

Research commissioned by the European Parliament in 2014 suggests that PPPs are the most expensive way for governments to invest in infrastructure, ultimately costing more than double financing made through bank loans or bond issuance. According to research by Maximilien Queyranne from the IMF Fiscal Affairs Department, the fiscal risks of PPPs are “potentially large” because they can be used to “move spending off budget and bypass spending controls” and “move debt off balance sheet and create contingent and future liabilities”.

This is the case even in a high-capacity country such as the UK where between 1990 and 2013, $78 billion of capital investment took place. Based on average interest rates over the time period, it would have cost the UK government $140 billion to borrow the $78 billion, but instead it committed to re-paying $420 billion over the lifetime of the PPP contracts, an additional $280 billion. In addition to the hidden debt liabilities, PPPs in developing countries usually suffer from lack of transparency. There is no public release of information of the terms imposed by PPP contracts. Governments, private companies and multilateral institutions can hide behind the vagueness of the term ‘PPP’, pretending that an investment is somehow cheaper because the private sector is involved, hiding the actual cost to the government. Moreover, the IMF and World Bank’s current Debt Sustainability Framework takes no account of the cost of PPPs. This makes use of PPPs more favourable as it allows the debt assessments to be bypassed, even though a PPP is likely to be more expensive. It also leaves the public unaware of the true financial risks facing governments.

Regardless of who invests, infrastructure has to be paid for whether through user charges or government spending. PPPs should only go ahead if they have been publicly shown to be the cheapest and most efficient way of providing infrastructure or services of the required quality, in line with meeting basic needs of the population and human rights obligations of the state. They should never be pushed through as part of explicit or implicit conditions, for instance through funding mechanisms which require that the money must be solely used for PPPs. And there should be the same transparency of all costs and liabilities as would be expected if a project were funded by direct government borrowing.