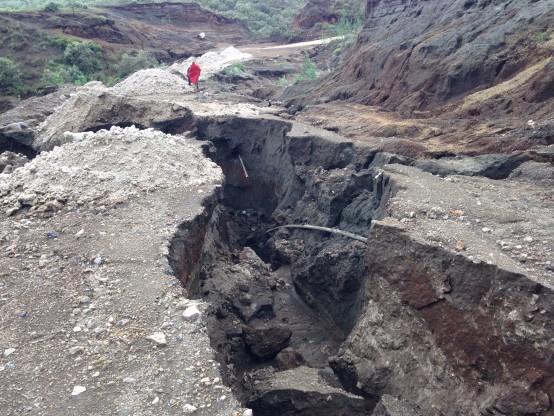 by Jackson Shaa and Annabel Perreras

In 2010, the World Bank approved a $330 million loan for the Kenya Electricity Expansion Program, to increase the capacity of electricity supply and access to electricity in Kenya. The programme, co-financed by the European Investment Bank (EIB), included expansion of existing geothermal production as well as new construction of a 140 megawatt power station — Olkaria IV. In a January statement during the Powering Africa Summit, the Narasha Community Development Group expressed concerns that over 1,000 people, mostly indigenous Maasai, were directly affected and an estimated 2,000 people indirectly affected by the programme in the Greater Olkaria Geothermal Area.

The resettlement process associated with the programme’s geothermal power generating component, implemented by the Kenya Electricity Generating Company Ltd. (KenGen), has been beset by problems. In 2014 members and representatives of a Maasai community filed a complaint with the World Bank’s accountability mechanism, the Inspection Panel (IPN). It included concerns that the project affected persons had only agreed to relocate provided they receive the collective title to the land before resettling, however, this has not happened. In addition, the community’s land was reduced from 4,200 to 1,700 hectares in the resettlement, and 14 families have still not received housing. Moreover, despite that keeping of livestock serves as an integral component not only of the Maasai economy but also of their identity, the land chosen is not suitable for grazing and no viable alternatives for the resettlement site have been offered.

In its July 2015 investigation report, the IPN found that despite the fact that the Maasai communities fit the requirements necessary to trigger the World Bank’s Indigenous Peoples Policy, the Bank did not apply the policy because the Maasai are pastoralists. When indigenous peoples are present in or have collective attachment to a World Bank project area, the policy must be applied and certain protections put in place, including the development of an Indigenous Peoples Plan, recognition of traditional land tenure and provisions for benefit sharing. The policy provides that projects must not proceed without first securing “broad community support” from the indigenous peoples.

The IPN concluded that the Bank’s failure to apply the policy “was the root cause of the ensuing shortcomings in the protections and benefits afforded to the [project affected persons] community.” These included the fact that consultations did not engage the Maasai elders or utilise the Maa language. As a result, the resettlement was culturally incompatible and there was no arrangement for the community to share in the benefits of the development of their resources. Furthermore, incomes and livelihoods of the resettled persons were not restored, as required by the Bank’s policy on involuntary resettlement. In response to the IPN report, the World Bank argued that it had been “focused on identifying hunter/gatherer groups as indigenous people”, rather than pastoralists, such as the Maasai, however, it conceded that the Indigenous Peoples Policy should have been applied.

Where is the World Bank’s responsibility?

In October 2015 a mediation process was initiated by the European Investment Bank’s Complaints Mechanism (EIB – CM) between the requesters and KenGen. The World Bank is participating as a co-facilitator in the process through its Grievance Redress Service (GRS), with the aim to agree on actions that are not only limited to the findings of the IPN report. The demands of the community now rest on the outcome of the mediation process and the World Bank and EIB’s ongoing supervision of the project. The World Bank management is required to return to the board by October 2016 to present the results of the mediation process and an Action Plan for board approval. The Maasai community now waits for the outcomes of these proceedings, particularly as regards their recourse on their right of land ownership as evidenced by a communal title.

Worryingly, pending the mediation, in mid-June 2016 the World Bank approved additional financing of $68 million to cover cost overruns for the project and to finance a feasibility study for a new geothermal operation, Olkaria VII. According to project documents, the Bank is not triggering the Indigenous Peoples Policy to this financing.

The implications of this case are not only relevant to Kenya. As the World Bank is finalising its new Environmental and Social Framework (ESF, see Observer Summer 2016), replacing the current safeguards, it needs to ensure that it has the strongest indigenous peoples and resettlement safeguards possible, that uphold the rights of indigenous communities like the Maasai. Since the World Bank opted not to consider the Maasai as indigenous peoples, there was no meaningful consultation, their rights were not respected and free, prior, and informed consent (FPIC) was not obtained. The Narasha Community Development Group therefore urges that FPIC should be required as part of the new ESF so that the affected community can understand the impacts of the projects, participate in the addressing of these impacts or be allowed to refuse to consent to it.

A resolution must be found to the community’s concerns, and the Indigenous Peoples Policy must be applied in this project and in any future financing. The Maasai face the denial of individual human rights from the right of representation, to decision — making and ownership of our own land. Without recognition of the Maasai’s existence as indigenous peoples, their rights and way of life will continue to be undermined.