Greek crisis, the book. Or actually several of them.

Statement by the Managing Director on the Independent Evaluation Office’s report on the IMF and the crises in Greece, Ireland, and Portugal

The Chairman’s summing up – The IMF and the crises in Greece, Ireland, and Portugal

The IMF and the crises in Greece, Ireland, and Portugal

Independent Evaluation Office of the IMF

Greece should default on its IMF loans 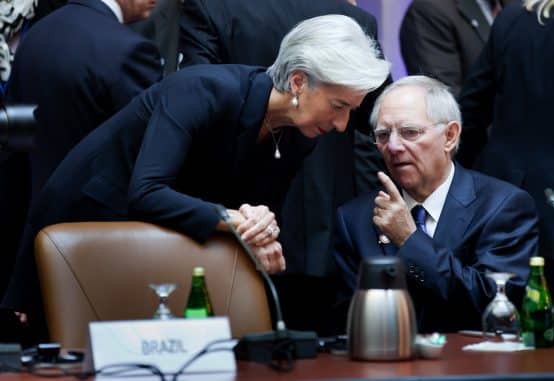 In July, a long-awaited evaluation of the IMF’s lending to Greece and Ireland in 2010 and Portugal in 2011 was released by the IMF’s Independent Evaluation Office (IEO). When the evaluation began in early 2015 the IMF’s second 2012 loan programme to Greece and 2013 loan to Cyprus were not yet completed and hence these two programmes were not evaluated by the IEO. The report severely criticised the IMF’s role, leading the Wall Street Journal to describe it in July as a “rebuke” of the Fund.

The evaluation found that the approach the IMF adopted to lending in Europe and its role within the Troika (the ad hoc joint lending arrangement including the Fund, the European Central Bank and the European Commission) “helped create the perception that the IMF treated Europe differently”. The IEO argued that the practice of permitting lending decisions to be taken by the Fund’s Troika partners before the Fund’s own board meetings occurred added to the perception that board decisions were “rubber-stamped” and a “fait accompli”. The board’s formal response to the evaluation pointed to longstanding divisions at board level between directors representing developing countries and the major shareholders over the IMF’s perceived “junior status” (see Observer Summer 2013). The board statement added that “many directors” noted that political economy considerations “could offer relevant perspectives” in future lending and also noted that “some directors” (meaning 5-6 out of 24 directors) saw “merits in developing procedures to ensure the independence of the Fund’s staff’s technical analysis”. The IEO found the IMF’s role in the Troika to be “unusual”, having “no clear demarcation of responsibilities” and concluded that the manner in which Troika partners collaborated meant that IMF staff were “potentially subjected to political pressure at an early stage”.

The IEO report set out concerns that, though the IMF was not necessarily a “junior partner” to its Troika partners, the Fund failed to “play its customary sole or lead role” that it adopts when lending to developing countries; its Troika partners had “veto power”. EU partners enjoy major shareholder status at the IMF and European directors wield a third of the board’s voting power. The IEO found that the board’s oversight function was performed only in a “perfunctory manner” – a “recurring issue” according to the IEO. July analysis by the New York Times highlighted that the IEO report revealed “how IMF staff members operated outside official channels, kept sensitive papers in personal files, [and] withheld crucial documents”. Susan Schadler, senior fellow of the Centre for International Governance Innovation and former deputy head of the IMF’s Europe department told the New York Times that the report revealed the IMF was “too easily swayed by European officials”.

Managing director Christine Lagarde’s official response to the evaluation rejected the IEO’s recommendation that “the executive board and management should develop procedures to minimise the room for political intervention in the IMF’s technical analysis”. Though Lagarde was in “support [of] the principle that the IMF’s technical analysis should remain independent” she did “not accept the premise of the [IEO’s] recommendation”, arguing the IEO’s report had “failed to establish” the need for specific policies to combat political intervention. The July Wall Street Journal article quoted an anonymous Fund official who nevertheless admitted that during recent negotiations with EU partners over further financial support to Greece “we were under extraordinary pressure from the Europeans … a few months ago”. Greek prime minister Alexis Tsipras commented on these negotiations at a September press conference that “what is creating conditions of delay … is the constant clash and disagreement between the IMF and European institutions”.

Former Greek finance minister Yanis Varoufakis called the evaluation a “brutal assessment” in a July blog post, but indicated that he expected the evaluation’s findings to be “forgotten soon”.  Lagarde, in her official response, considered the evaluation’s overall findings to indicate that the IMF’s role in the lending to the eurozone had in fact been a “qualified success”, considering the Greek crisis’ “unprecedented” nature and the “backdrop of the global financial crisis”. Lagarde specifically argued that the IMF’s intervention succeeded in “buying time to build firewalls”, restoring growth, market access (except in Greece) and preventing contagion. She conceded that the Greek challenge was “unique” with “recurrent political crises” and “pushback from vested interest” but maintained that the key goal was achieved: for Greece “to remain a member of the euro area”.

The IEO complained that while conducting the evaluation it did not receive documents from Fund staff in a “timely manner”, noting that some documents “were not provided for over a year”. Moreover “some sensitive documents were provided to the IEO following the managing director’s intervention at the IEO’s request” and only following circulation of a draft of the evaluation report to staff. The IEO concluded that the “lack of documentation” from the IMF had “hampered” its evaluation and therefore the IEO was “not in a position to state that it saw all relevant documents” despite the apparent intervention of the managing director. The IEO complained that these problems meant the IEO was not always able to “determine who made certain decisions or what information was available, nor has it been able to assess the relative roles of management and staff.” The board’s formal response did pick up on this issue, but said only that it “noted with concern the difficulty that the IEO had experienced in obtaining confidential documents”. The evaluation recommended that “the executive board and management should reaffirm their commitment to accountability and transparency and the role of independent evaluation in fostering good governance”.

Greek crisis, the book. Or actually several of them.

Statement by the Managing Director on the Independent Evaluation Office’s report on the IMF and the crises in Greece, Ireland, and Portugal

The Chairman’s summing up – The IMF and the crises in Greece, Ireland, and Portugal

The IMF and the crises in Greece, Ireland, and Portugal

Independent Evaluation Office of the IMF

Greece should default on its IMF loans