A call to boost the World Bank’s selection process

Open letter to the executive directors on presidential succession process

IMF and World Bank at 70: many happy returns? 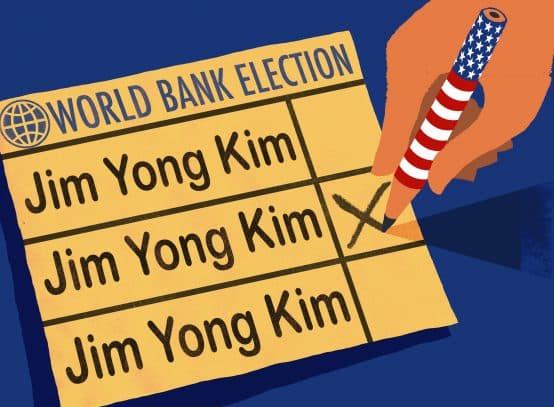 In mid-September, the World Bank confirmed that its president Jim Yong Kim was the only candidate put forward by member countries for the post of president when his five-year term runs out in June next year. The Bank opened the much-criticised nomination process in late August, nearly a year before the end of Kim’s current term, but with no more than three weeks for World Bank board members, as well as other stakeholders, to engage. According to the Bank the process was triggered by Kim notifying his interest in a second term as president, however, media reports also flagged other motivations, such as concerns that Donald Trump could win the US presidential election in November with potential negative implications for the Bank. The selection process is expected to be finalised by the early October Bank annual meetings, after the Bank’s executive directors have met with the candidate.

Only hours into the nomination process the US publically announced its support for Kim, sending strong signals that it is seeking to retain control of the post. The US nomination was followed by several other countries’ support for Kim, including Germany and the UK. The nominations of Kim and the associated process has been widely criticised as a step backwards in terms of the Bank’s leadership selection, despite progress made in the preceding selection process in 2012, instead reinforcing the unofficial and longstanding “gentlemen’s agreement” that ensures that leadership of the Bank and IMF is shared between the US and Europe, with Americans running the Bank and Europeans managing the Fund (see Update 80). The mid-July appointment of Paul Romer, also a US citizen, as the Bank’s new chief economist after two previous appointments from non-US countries, further contributed to the concerns about the degree of US influence in the Bank.

In early August, prior to the Bank opening the nomination period, the Bank staff association sent an open letter to the Bank’s executive directors, challenging “decades of backroom deals which, twelve times in a row, selected an American male”, rather than applying the principles of “good governance, transparency, diversity, international competition, and merit-based selection”, values normally preached by the Bank. The letter argued that the Bank “came close” to following these principles in 2012, when three candidates were identified and interviewed: Kim, Ngozi Okonjo-Iweala and Jose Antonio Ocampo, the latter both former finance ministers from Nigeria and Colombia respectively, but noted that “in the end we reverted to status quo.” In an August article on news site Devex Hafed Al-Ghwell, a former adviser to the dean of the World Bank board, alleged that Kim’s 2012 appointment was ultimately due to pressure from the US rather than merits. On the day of the announcement of Kim’s appointment in April 2012 Okonjo-Iweala conceded to reporters: “You know this thing is not really being decided on merit. It is voting with political weight and shares, and therefore the United States will get it”.

As the nomination process closed in mid-September, 42 former senior World Bank staff wrote a letter to the Financial Times (FT) expressing their “deep concern about the shameful action of governments around the world in bypassing good governance and transparency” in the selection of the next president. The signatories denounced the process as “deeply flawed; leaders should not be chosen via antiquated ‘gentleman’s agreements’.” They urged that the selection process “be extended to the end of the year, and a search committee be formed to generate a truly open, transparent, merit-based and competitive process.”

The Bank staff association’s concerns over the selection process are grounded in longstanding internal opposition towards Kim, in particular in response to the Bank’s restructuring process (see Observer Summer 2015, Winter 2015). Its letter pointed to “a crisis of leadership” at the Bank, referencing analysis from the past years’ employment engagement surveys which found that “only one in three understand where the senior management team is leading us. Even fewer believe that our senior management creates a culture of openness and trust.” The FT letter by former senior staff highlighted that “several of Dr Kim’s senior appointees have had to be dismissed on performance grounds [and] there has been a pattern of firing senior women.” They described a “climate of fear”, where “staff hunkers down, follow routine activities and the best seek more supportive work environments.” According to Al-Ghwell the Bank – by pushing for Kim’s renewal – is trying to pre-empt “a serious revolt going on in the Bank by the staff”. The letter further noted “the weakening of the Bank’s finances resulting from ill-advised decisions”, calling the Bank’s reorganisation “poorly designed and implemented.” A late August article in the Financial Times estimated that the Bank has so far only achieved half of its $400 million spending target, a major objective of the restructuring.

The Bank and Kim’s leadership have also been repeatedly criticised by civil society, in particular with regards to the recently completed environmental and social safeguards review, in terms of both process and outcome (see Observer Autumn 2016). As the new framework was signed off by the Bank’s board in early August, lack of genuine stakeholder engagement was raised by Nezir Sinani and Elana Berger of the US-based NGO Bank Information Center, writing for news site Huffington Post. They commented that the Bank “does not appear to have taken on board the vast majority of the input provided by civil society, with Bank management instead clearly prioritising the desires of client governments.”

The selection process took place as the World Bank is experiencing increased competition from new players in the international financial arena (see Observer Autumn 2014). It is also seeking to rally donor funding for its low income country arm, the International Development Association (IDA), amidst concerns over weak results (see Observer Summer 2016). In a mid-September blog on Economia Devesh Kapur of the University of Pennsylvania commented: “Having found their own alternatives for most of what the Bank does, [emerging powers’] indifference to a second term for Kim suggests that they simply don’t think the Bank matters much anymore.” In 2015 the Bank launched a “Forward Look” process, due to be discussed at the annual meetings in early October. No public document has been released to date, but other official documents frame the exercise as addressing “three interrelated challenges of the changes in the external environment, the WBG’s ability to adapt to these changes, and its financial capacity”.

While the US affirmed its hold over the presidential position through the nomination of Kim, the Bank also sought to strengthen its relationship with China (see Observer Spring 2016). In the past six months the Bank has signed agreements with China’s Asian Infrastructure Investment Bank, (see Observer Summer 2016) and the BRICS’ (Brazil, Russia, India, China, South Africa) New Development Bank. In August the World Bank issued a yuan-denominated World Bank bond in the Chinese domestic market, and in September it announced a new partnership with China on renewable energy in Africa. China confirmed its support for Kim in early September, lauding his “constructive role in promoting cooperation between the World Bank and China”.

Controversy, however, remains over voting rights at the Bank, with emerging economies making no secret of seeking a bigger role in the institution. Following the 2015 shareholding review, also on the agenda for the annual meetings is a new “dynamic formula”, using economic weight (based on GDP) and development impact (based on IDA contributions), to determine countries’ shareholding and thus voting power in the Bank. The review forms part of the Bank’s “voice reform” process, initiated in 2010 with an aim to increase developing countries’ representation at the Bank (see Observer Spring 2016, Autumn 2015). A March interim progress report revealed tensions and called for “significant compromise on currently stated positions” to be able to reach agreement in time, in particular on how to reflect “the relative weights to be given to historic and recent IDA contributions and the overall weight of IDA in the formula.”

Jorge Daniel Taillant, of Argentinian NGO the Center for Human Rights and Environment, commented: “The ‘pay to play’ dynamics of Bank leadership is clearly an ongoing dominant paradigm that doesn’t show signs of change or any real willingness of the countries that currently call the shots to modify. Further, we have seen a dangerous pendulum swing towards less transparent and less participatory governance of some of the member states at the World Bank. That’s not the sort of leadership the world needs today.”

A call to boost the World Bank’s selection process

Open letter to the executive directors on presidential succession process

IMF and World Bank at 70: many happy returns?