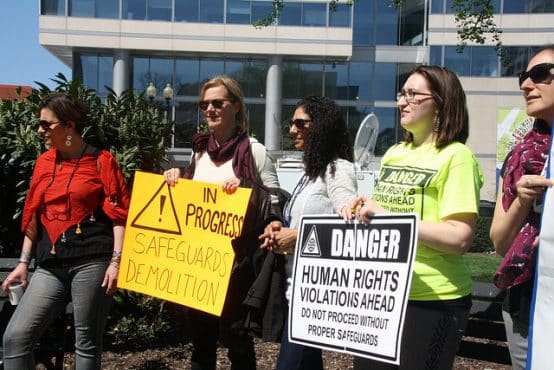 After a four-year process the World Bank’s board of executive directors approved a new Environmental and Social Framework (ESF) in early August, to replace the current safeguards (see Observer Summer 2016, Autumn 2015, Update 82). According to the Bank’s factsheet the new framework “will drive sustainable development through capacity- and institution-building and country ownership”. The new framework is expected to take effect in early 2018 with the existing safeguards running in parallel for about seven years to govern previously approved projects. The Bank has not yet released the ESF guidance documents, but according to the UKs Department for International Development (DFID), they are expected to be shared for public comments, however, only as an informal process and not a public consultation.

Following the public release of the final draft, a joint response in late July by 14 civil society organisations (CSOs), including NGO Forum on ADB and Social Justice Connection, welcomed the addition of some new provisions on labour and non-discrimination, but cautioned that “these gains have been largely undermined by the replacement of clear time-bound requirements with vague language, loopholes, flexible principles and reliance upon ‘borrower system’”, which “reflects a race to the bottom in a shameful scramble to eliminate requirements for careful environmental and social due diligence”. The groups said that the draft reflects “little of the input received from civil society organisations, indigenous peoples and communities calling for stronger, clearer protections for their environments, their livelihoods and their human rights.”

The Bank has failed “to include a binding commitment to respect human rights”, wrote Gretchen Gordon, of international NGO Coalition for Human Rights in Development, on blog site Open Democracy. According to the US-based NGO Human Rights Campaign (HRC) this includes human rights for one of the most vulnerable and marginalised groups – Lesbian, Gay, Bisexual, Transgender and Queer (LGBTQ) people – highlighting that all references to sexual orientation or gender identity have been removed from the new policy. Ty Cobb of HRC commented “it is deeply disappointing that the Bank chose to side with anti-LGBTQ voices who wanted to roll back potential human rights protections, rather than standing up for human rights and the dignity of all people.”

On the day of its approval the US released a public statement supporting the new ESF, but calling for the Bank to “be conservative in its use of borrower frameworks” given the risks. While welcoming the new ESF on labour, the US raised concerns, including that it “appears to allow primary suppliers to self-identify child labour and forced labour risks to their own workers”. It urged the Bank “to hold borrowers accountable for monitoring and remedying these risks in their primary suppliers.”

In late July, before the ESF was approved, the International Trade Union Confederation (ITUC) raised concerns on their website over the absence of any reference to the International Labour Organization’s (ILO) core conventions, which prohibit discrimination, child and forced labour, and require respect for freedom of association and the right to collective bargaining. Peter Bakvis of ITUC commented: “it should be an imperative for the Bank to ensure full consistency with the norms of the recognised international standard-setting bodies, including the ILO for labour.”

Concerns remain over the safeguards consultation process (see Observer Winter 2016, Winter 2015). In a July statement 36 African civil society groups, including Peace Point Action in Nigeria and Jamaa Resource Initiatives in Kenya, complained of “certain views and agendas which would seek to weaken the safeguards’ protection of people and the environment being attributed to ‘African countries’.” The groups emphasised that “these positions are not reflective of the positions of civil society from African nations”, pointing out that despite their engagement “in many consultations in our countries we were not given the opportunity to present our concerns”. Moreover, they argued that it is clear from the drafts that “the inputs of African civil society organisations are not reflected in the text”. They concluded that “from the outcome, this was not a consultation, but a monologue.”

Elana Berger of US NGO Bank Information Center (BIC) commented “now that the new framework has been adopted it is critical that sufficient resources and tools, such as detailed guidance notes, are developed during this implementation process that emphasise the importance of meaningful engagement with civil society and communities – particularly those that are most vulnerable to the negative impacts of development.”