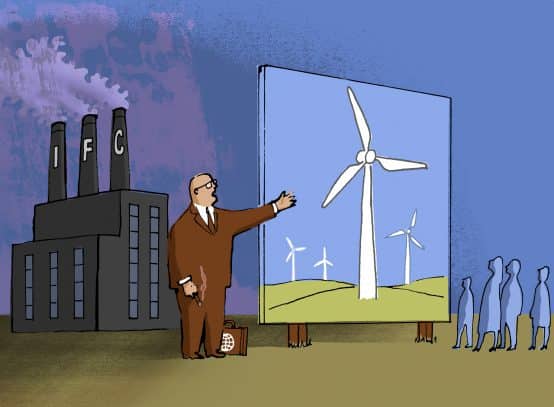 The negative development impact of the International Finance Corporation’s (IFC, the World Bank’s private sector arm) investments in financial intermediaries (FIs) has once again been brought to light (see Observer Spring 2014). An October 2016 report, Disaster for us and the planet, by US-based NGO Inclusive Development International (IDI) and partners, provided evidence that  “IFC-supported financial institutions have funded at least 41 new coal projects …  since the World Bank announced its coal ban in 2013”. While the IFC has claimed that the concerns of civil society organisations have largely been addressed through its response to previously highlighted harmful projects that it funds, the report demonstrates that the IFC remains exposed to highly damaging projects.

The report highlighted the IFC’s involvement in the Mahan plant in India, where it provided millions of dollars in funding to two banks, IDFC and ICICI, which are “major players in India’s infrastructure and industrial sectors”. It noted that “in total, these two IFC-supported banks helped provide approximately $1.9 billion in financing to build the Mahan coal plant”. The report also disclosed that “the IFC’s support for the project did not end there” as it enabled the development of a nearby mine which Greenpeace found “would displace or otherwise harm 50,000 people who lived in the forest or depended on it for their livelihoods”.

The report also detailed IFC’s involvement in Rampal in Bangladesh, which it calls “one of the most potentially destructive coal plants in the world”. The plant sits very close to the world’s largest mangrove, which supports the lives of two million people in India and Bangladesh, is a UNESCO World Heritage site and home to numerous endangered and threatened species. The report stressed that “the World Bank was initially approached to fund Rampal. However, the Bank declined … Three French banks, Credit Agricole, BNP Paribas and Societe Generale, were also approached but refused to get involved”. In April 2016, Norway’s sovereign wealth fund placed the company charged with building the plant, the National Thermal Power Corporation, on its exclusion list.  The report emphasised that while “these institutions distanced themselves from the projects, six IFC-funded commercial banks arranged billions of dollars in financing for the National Thermal Power Corporation”, noting that “between 2005 and 2014, the IFC provided $520 million in funding to the six banks”. Considering the impact of IFC’s involvement in these and other similar projects, the report stressed that “these projects have also decimated the world’s forests. Coal plants, and the mines that feed them, are a leading cause of deforestation globally, further contributing to climate change.”

The World Bank Group has ended up fuelling and profiting from business activities responsible for enormous human suffering, environmental devastation and in some cases serious crimesDavid Pred

IFC’s involvement in coal power generation lies in stark contrast to the World Bank Group’s (WBG) position on coal, as outlined in its 2013 Energy sector directions paper, which states that “the WBG will provide financial support for greenfield [new] coal power generation projects only in rare circumstances”(see Bulletin December 2013). The Bank’s position was reiterated by World Bank president Jim Yong Kim in November 2016 when, in celebration of the entry into force of the Paris Climate Change Agreement, he stressed that “without climate action at scale, more than 100 million people could fall back into extreme poverty by 2030”, and that “we need to focus special attention and action on Asia, where energy demand is growing and some countries continue to look to coal as the solution.”

IDI’s report forms part of a four-part series titled Outsourcing development: Lifting the veil on the World Bank Group’s lending through financial intermediaries and contributes to evolving evidence of the negative development impacts of IFC investments in FIs. During a months-long investigation following the trail of IFC money, IDI uncovered 121 harmful projects that the IFC is funding through FIs. Despite some positive initiatives taken by the IFC, such as the disclosure of it private equity investments and a stated commitment to “strengthen and deepen the quality and coverage of IFC’s E&S [environmental and social] risk management of FIs”, the report demonstrated that the opaque nature of IFC investments in FIs and its inability or unwillingness to adequately screen and monitor FI sub-projects persist to the detriment of communities and the environment (see Observer Summer 2015).

The report’s reliance on expensive proprietary market information, unavailable to often marginalised communities affected by IFC-funded projects or their supporters, demonstrates that concerns about the lack of disclosure of sub-projects funded by IFC FI clients remain unaddressed (see Bulletin Nov 2014). The lack of disclosure prevents communities and CSOs from holding the IFC to account by bringing cases to light and accessing the IFC’s grievance mechanism, the Compliance Advisor Ombudsman (CAO). This contravenes the IFC’s performance standards which oblige the IFC to ensure that communities are aware of the existence of the CAO.

An October letter to the IFC’s CEO Philippe H. Le Houérou, sent by six organisations, including the Philippines Movement for Climate Justice, a coalition of 130 environmental groups in the Philippines, and Machimar Adhikar Sangharsh Samiti (MASS), pleaded with him to respond to the call of those working to avoid a “climate catastrophe by ensuring that the IFC’s new FI investments are coal-free”.

Meanwhile, Owning the outcomes, a joint briefing by Oxfam and IDI also released in October 2016, challenged five arguments that the IFC has put forward to repudiate responsibility for harms caused by its financial-sector investments. David Pred, Managing Director of IDI commented “While the IFC has tried to distance itself from the projects funded by its intermediaries, the fact is that these banks are brazenly disregarding the IFC’s environmental and social requirements. As a result, the World Bank Group has ended up fuelling and profiting from business activities responsible for enormous human suffering, environmental devastation and in some cases serious crimes”.