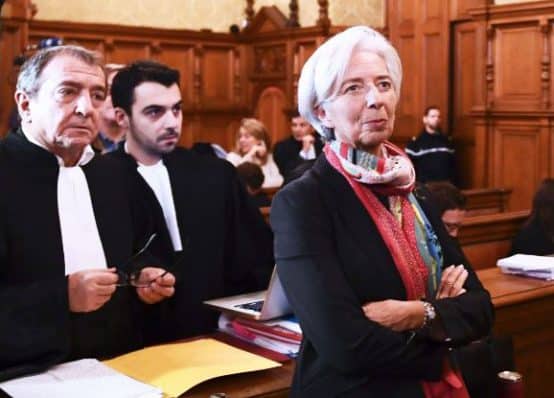 In mid-December 2016, IMF managing director Christine Lagarde was found guilty of “negligence” by a French court on charges relating to her time as French finance minister in 2008. Lagarde waived her right to immunity to stand trial but lost an appeal in July to avoid the trial altogether (see Observer Autumn 2016). A special tribunal ruled Lagarde was guilty of criminal charges linked to “negligence in dealing with public funds” when she was finance minister, as she sent a dispute to an arbitration authority that awarded €400 million ($418 million) in damages and interest of public funds to a French business tycoon. The tribunal opted not to impose a fine or a sentence; Lagarde could have faced a €15,000 fine and up to a year in jail. Lagarde will not appeal the decision. Speaking at a news conference in Washington DC on the day of the verdict Lagarde said “I’m not satisfied with it, but there’s a point in time when one has to just stop, turn the page, and move on”.

The lack of punishment caused a wave of criticism by politicians and civil society. A petition on the website change.org, signed by more than 250,000 people, argues that there seems to be a separate justice system for the powerful, who are dispensed from ordinary justice and sanctions. The petition demands that the law should be applied to Lagarde, in the same way as the law applies to ordinary citizens, and that the former minister must answer for her acts before an ordinary correctional court and face the consequences.

The same day as the conviction, the IMF executive board issued a statement reaffirming “its full confidence in the managing director’s ability to continue to effectively carry out her duties”. In an article in the New York Times (NYT), the board’s view is characterised as a desire to maintain continuity at the Fund during a period of political changes taking place in Europe and the US, and that there was consensus that “Lagarde’s transgressions occurred when she was not at the Fund — in contrast to those of her predecessor, Dominique Strauss-Kahn”, who stepped down in June 2011 after allegations of sexual assault and attempted rape against a New York hotel worker (see Update 76). Nicolas Véron, of the Belgian Bruegel Institute, told the NYT that “It would be complacent if not delusional to say there will be no impact on the institution, …. the only question is how big is the impact — and how does it compare with the need for stability.”

“When Lagarde finishes her term, the IMF is going to have to cast its net a lot wider to find its next managing director.”James Boughton of the Center for International Governance Innovation

Bhumika Muchhala of  NGO the Third World Network commented “Given the current political pandemonium, the IMF board doesn’t want to ruffle any feathers. And importantly, Lagarde is loyal to the European Central Bank’s austerity agenda giving her the trust of the European financial and political elite establishment, and in real politik that is much more precious to the Fund than making amends for past foils, no matter how corrupt or scandalous.”

A December Devex article cited un-named experts saying that “the scandal emphasised ongoing issues within the institution”, which “could bolster calls for leadership reform at the institution”, calling into “question the existing governance arrangement that has seen a European lead the IMF and an American lead the World Bank since the Bretton Woods institutions were forged more than 70 years ago.” Lagarde’s initial appointment contradicted promises for “an open, transparent and merit-based selection process, irrespective of nationality and gender” (see Update 76). According to James Boughton, former historian of the IMF and senior fellow at the Center for International Governance Innovation: “When Lagarde finishes her term, the IMF is going to have to cast its net a lot wider to find its next managing director.”