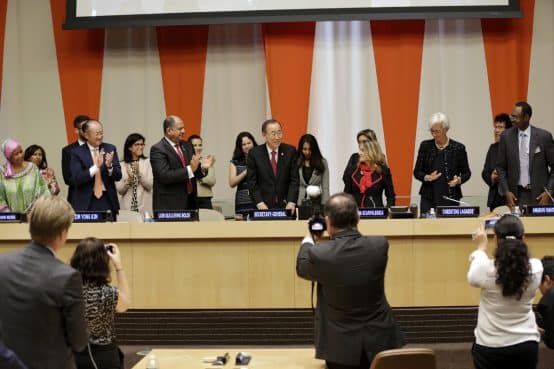 In September 2016, the UN High Level Panel on Women’s Economic Empowerment published its flagship report, Leave no one behind: A call to action for gender equality and women’s economic empowerment. Launched in March 2016 (see Observer Spring 2016), the Panel was established by Ban-Ki Moon, then UN Secretary General, in an effort to catalyse progress towards closing gender gaps in economic opportunities and outcomes, and the achievement of the Sustainable Development Goals by 2030. Members of the Panel include Christine Lagarde, managing director of the IMF, and Jim Yong Kim, president of the World Bank, among other government, private sector and civil society representatives.

The report identified seven primary drivers of women’s economic empowerment (WEE), leading to the establishment of seven working groups corresponding to each driver. The working groups will make recommendations for action to be published at the March session of the Commission on the Status of Women in New York. While the drivers included recognising, reducing and redistributing unpaid care work, which carries significant macroeconomic dimensions in particular, the report did not explicitly recognise an enabling macroeconomic environment as a major driver of WEE.

In response, the UK-based Gender and Development Network (GADN) urged the co-chairs of the Panel in an open letter in November to consider enabling macro-economic environments as a driver of WEE and for the creation of an eighth working group to explore this “pivotal” area, emphasising the importance of a discussion on how to create the necessary fiscal space to fund WEE measures. GADN also highlighted that the IMF and World Bank’s presence on the Panel provides a unique opportunity to further this agenda.

In December, the Panel’s Secretariat responded that UN Women, another Panel member, will convene the proposed working group on “the broader economic environment, including macroeconomic issues and decent work”. Jessica Woodroffe of GADN, a contributor to the eighth working group, expressed “hope that the working group can demonstrate the value – and feasibility – of policies that promote gender equality, and that the rest of the Panel will support these findings.” She added: “It will not be possible to achieve women’s economic empowerment without major changes in the way that macroeconomic policy is designed and implemented”, citing the 2015-2016 UN Women report as an important resource on macroeconomic policies that enhance women’s economic empowerment that should be used by the Panel.

In September, Christine Lagarde made five commitments on behalf of the IMF in response to the report. Four of these involve continuing work it is already pursuing. As its fifth pledge, the Fund committed to “undertaking further research on the links between gender inequality and growth, and the impact of [macroeconomic] policies on gender inequality”. Francesca Rhodes of Oxfam GB commented that this commitment is “particularly welcome, given criticisms that macroeconomic policies commonly prescribed by the IMF undermine gender equality’’, and expressed hope to “see the IMF, as key shaper of global macroeconomic policy, engage meaningfully with the recommendations of the panel on this topic”. Jim Yong Kim did not make any new commitments on behalf of the World Bank, instead citing the 2016-2023 Gender Strategy already in place and other existing gender work, which has recently been the subject of criticism by the Independent Evaluation Group (see Observer Summer 2016).