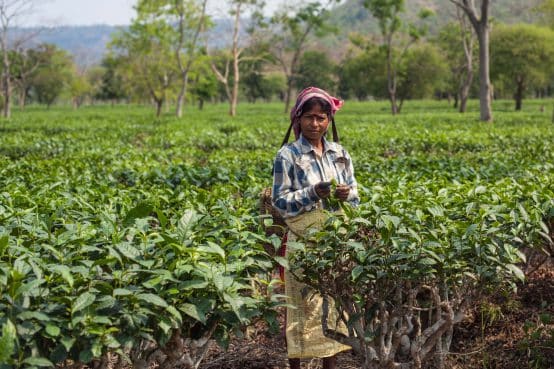 by Simran Sachdev and Jayshree Satpute of Nazdeek

An Adivasi woman working in Assam’s tea plantations will carry her baby on her back as she has nowhere to leave her children, and she’ll bring another child along to help her pick tea leaves. She will spend eight to nine hours picking leaves and gather a total of 24 kilograms a day, with few or no breaks. In breach of the state’s legal minimum wage of 250 Indian rupees per day, she will receive only 126 rupees (about £1.52). Failure to meet her daily target will further reduce her wage. Aggravating her poor working conditions, there is no toilet accessible in her workplace, and the housing and sanitation facilities provided for her in the plantation are in disrepair.

Nazdeek’s online exhibition shows that despite an investment by the International Finance Corporation (IFC), the World Bank Group’s private sector arm, very little has changed in Assam’s tea gardens since colonial times. Tea plantations in Assam act as pseudo-states – plantation workers live and work there, requiring all basic services at the site. In order to truly improve working and living conditions for tea laborers through this investment, the IFC must ensure that the long-standing colonial structure in tea plantations is dismantled, and use its leverage with plantation owners to ensure workers can live a life of dignity, rather than that of a slave.

The IFC joined forces with Tata Global Beverages in 2009, investing $7.8 million for a 19.9 per cent stake in Amalgamated Plantations Private Limited – the second largest producer and supplier of tea in India. Tata retained a 49.6 per cent stake. The project implemented an employee-share-ownership programme, which claimed to offer 30,000 workers the opportunity to make decisions in the company and share in its profits. The investment was supposed to help lift workers out of poverty and improve their working and living conditions. However, in a 2013 complaint with the IFC’s accountability mechanism, the Compliance Advisor Ombudsman (CAO), three Indian non-governmental organisations cited poor living and working conditions for tea laborers in Assam, noting that “the living and working conditions on the tea estates do not comply with IFC social safeguard policies. The conditions are also not in compliance with Indian domestic law, and particularly the Plantation Labour Act” (see Bulletin Feb 2014).

The CAO conducted an investigation and published its findings in a report made public in November 2016, validating the complainants’ claims. The report confirmed numerous allegations made in the complaint, including lack of compliance with requirements on housing and other basic services; insufficient consideration of workers’ health; lack of due diligence in assessing the risk of child labour; exposure of workers to extremely hazardous chemicals; and lack of an effective grievance mechanism for workers.

In response to the claim that “Workers are impoverished and suffer from malnutrition due to inadequate compensation”, the CAO report found “that IFC has not assured itself that the wages paid by the client are consistent with IFC’s commitment to support jobs which offer a ‘way out of poverty’ or ‘protect and promote the health’ of workers”. At a minimum the IFC should ensure that workers are paid the legal minimum wage. While even that is below a living wage, abiding by Indian labour laws is essential, and it is the bare minimum that the IFC can do to improve living and working conditions for tea laborers.

In response to the CAO report, the IFC released an action plan that should have directly, and in a timely fashion, addressed the CAO’s findings. The implementation of the plan is to be monitored by the CAO. The IFC’s action plan, however, is very limited in scope. Rather than addressing the root causes of workers’ poverty as highlighted in the CAO report, the plan only envisages few interventions increasing the provision of basic health and sanitation services over the next two years. The quality of these services, as well as the plan’s overall potential to truly tackle labour exploitation and appalling living conditions, are highly questionable. The IFC should see the CAO report as an occasion to ensure it meets it’s development mandate by creating structural change on Assam’s tea plantations, as it is terribly overdue.

The 2013 complaint is key to the struggle of tea plantation workers, but it is only one step towards fair working conditions. Nazdeek and partner organisations are working alongside tea plantation workers to run advocacy campaigns, conduct legal empowerment and education initiatives, and use strategic litigation to ensure just wages, improved health services, and better housing conditions – all to challenge the colonial structure still embedded in Assam. Given the IFC’s claim of working to “help create opportunity for all” it should fully support these efforts, and it should ensure that workers are in a position to break the cycle of poverty and to make decisions about their own futures.

By Simran Sachdev and Jayshree Satpute of Nazdeek