Oxfam positioning and recommendations on IDA18 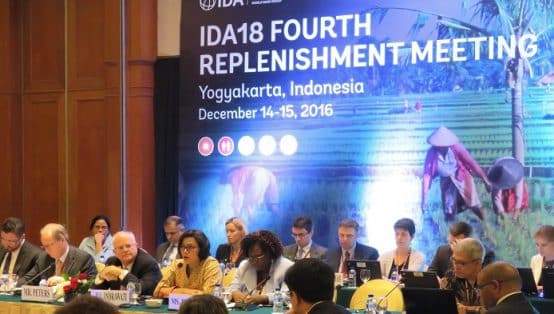 After the final meeting of the International Development Association’s (IDA, the World Bank’s low income country arm) 18th replenishment round in December, the World Bank announced a likely funding envelope of $75 billion for IDA through 2020. Every three years, donors meet to replenish IDA resources and review its policy framework (see Update 69). IDA18’s $75 billion, however, does not quite compare with IDA17’s $52 billion (see Observer Winter 2014), because IDA18 is expected to use its strong credit rating to leverage its equity and raise about a third of the $75 billion through the capital debt markets, subject to eventual repayments. Another third of the IDA18 funds will come from the Bank’s own resources, such as the International Bank for Reconstruction and Development (IBRD, the Banks middle income country arm), the International Finance Corporation’s contribution (IFC, the Banks private sector arm) and from borrowers’ repayments of earlier IDA credits.

Paddy Carter of UK-based think-thank Overseas Development Institute commented that “comparing headline numbers from IDA17 to IDA18 can be misleading, in the sense that borrowing cannot really be considered ‘replenishment’ and the decision by donor countries not to put more money into IDA is hard to square with their rhetoric about the need to scale up efforts for sustainable development.” Tim Jones from UK-based NGO the Jubilee Debt Campaign cautioned: “Raising money from capital markets ties IDA funding more closely into the interest rates the World Bank can borrow at. In the future this could mean higher interest rates for IDA recipients; increasing risk of future debt crises.”

According to the Bank’s December press release, to date, a total of 48 countries have pledged resources to IDA18, also accounting for a third of the funds, and additional countries are expected to pledge in the near-term. Details of the contributions made by individual countries are to be announced in spring. As with IDA17, the UK is likely to remain the largest donor, followed by the US. According to newssite Nikkei Asian Review, Japan is the third largest donor with a $5.23 billion contribution, an increase of about 20 per cent from three years ago.

A total of 75 low-income countries are eligible to benefit from the IDA18 financing of grants and low- to zero-interest loans. The Bank said in its December press release IDA18 will double the resources to address fragility, conflict and violence to more than $14 billion and provide an additional $2 billion for refugees and countries that host them. Caroline Heider director general of the Bank’s Independent Evaluation Group (IEG), told Devex in October that a key finding of a 2016 evaluation of the World Bank’s engagement in situations of fragility, conflict and violence “is that the causes of conflict, the shape of the political economy and the identity of key stakeholders are often either not understood [by the Bank]… or are understood but not translated into a strategy or operational programme.” Korinna Horta of German NGO Urgewald commented “this substantial rise in IDA resources will increase the pressure of the World Bank to accelerate lending at a time when it has greatly weakened its environmental and social standards (see Observer Autumn 2016, Summer 2016). The number of problem projects is likely to rise significantly with untold risks to affected people and their environment. The Bank needs to ensure project implementation benefits the poor.”

IDA18 includes a controversial plan to create a $2.5 billion private sector window (PSW) to complement existing investments into private sector development in IDA countries. The PSW will be introduced together with the IFC and Multilateral Investment Guarantee Agency (MIGA, the Bank’s political risk insurance arm). A September IDA report on PSW set out the proposed governance arrangments with details still to be worked out, noting that strategic direction and monitoring will be provided by an oversight committee composed of the Boards of the three institution. According to the Bank, the PSW “will help mobilise private capital and scale up private sector development in the poorest countries, particularly in fragile situations”. NGO Oxfam raised concerns about the PSW in a September briefing, urging the Bank to ensure private sector investments are pro-poor: “Social risk is especially important to consider in the context of fragile states where there is a real possibility for fuelling social conflict, particularly those related to land and natural resources.” Nick Galasso of Oxfam International expressed further concerns in December, arguing that the IFC “has a poor record of protecting the communities they’re supposed to be helping from the impacts of their clients’ projects (see Observer Spring 2016). We urge the Bank to significantly reform and ramp up their oversight and protections before a single dollar is invested.”

Oxfam positioning and recommendations on IDA18