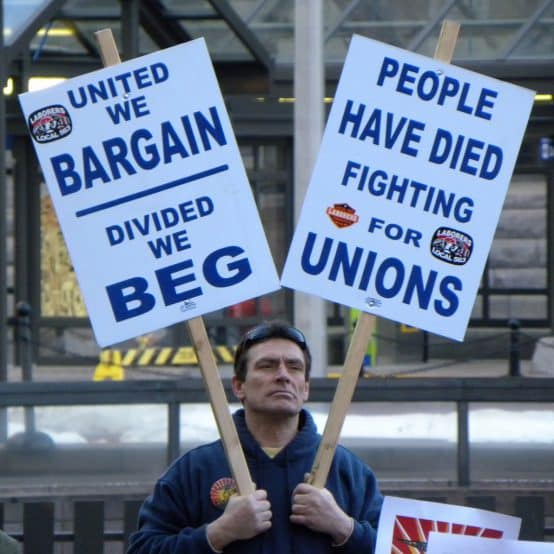 In December 2016, the UN independent expert on the effects of foreign debt and other related international financial obligations, Juan Pablo Bohoslavsky, released a report for the 34th session of the Human Rights Council on labour rights in the context of economic reform and austerity for the UN Human Rights Council, strongly criticising labour-related policies of the World Bank and IMF.

The report first laid-out the significant role the World Bank and in particular the IMF have played in pushing for labour-related austerity policies through lending and surveillance, noting that “around 50 per cent of all [IMF] lending programmes have involved one or more labour-related conditions from 1994 to 2007” and “between 25 to 40 per cent from 2007 to 2014”. It went on to note that when faced with financial and economic crises, the IMF’s dominant approach towards labour reform has been deregulation, which erodes labour rights, citing numerous cases going as far back as the 1950s and as recent as 2013. Even after the IMF changed its rhetoric towards social inclusion and protection of the poor in the aftermath of the 2008 financial crisis, the report found that it still promotes policies favouring labour market deregulation and a salary freeze for civil servants in countries like Morocco and Tunisia.

The report described the multiple impacts these austerity-related labour reforms have had on human rights, such as the retrogression of work-related gender equality; weakening of worker’s protections; undermining collective labour rights; and contributing to an increase in inequality and insecure and informal employment. It stressed that these reforms can foster discrimination in the labour market against marginalised social groups, including the young and elderly, and reduce unemployment benefits and other job-related social protections in contravention of international human rights obligations (see Observer Summer 2015).

Additionally, the report challenged the “conventional wisdom” that reducing labour protections results in increased decent employment or economic growth, claiming that there is insufficient empirical evidence to prove this. Rather, it argued that “sometimes it appears that debt crises … provided a pretext to push through labour market reforms favouring business interests rather than addressing economic problems. It is therefore not surprising that debt crises frequently exacerbate economic inequality.” Peter Bakvis, director of the International Trade Union Confederation’s (ITUC) Washington office commented  “it is difficult not to agree with this hypothesis. When you think of the IMF’s current anti-inequality rhetoric, it is rather astounding to read about the Fund’s long history, which has not yet ended, of advocating policies that plainly worsen income inequality.”

The report concluded with several recommendations to internatioal financial institutions, such as that they should “include in their policy documents an explicit commitment to respect human rights, including labour rights” and “develop policies to deal effectively with alleged violations of labour rights in the macroeconomic reform programmes and projects that they finance”. Notably, Bohoslavsky pointed to a persistent lack of coordination between key lending institutions, such as the IMF, and relevant international organisations, in particular the International Labour Organization (ILO): “This is problematic not only because IMF has recognised that structural reforms institutions, such as ILO, ‘may be better placed to advise’, but also because such lack of coordination entails the risk that adverse effects of policy proposals are not adequately identified and addressed.”

Bakvis added: “the report does a very thorough job not only in exposing the damaging impact of measures supported by the IMF in particular to reduce workers’ living standards and erode their rights, but also in demonstrating that evidence does not support the reigning assumption at the Fund that workers’ rights are detrimental to economic development.”