Forward Look – A vision for the World Bank Group in 2030 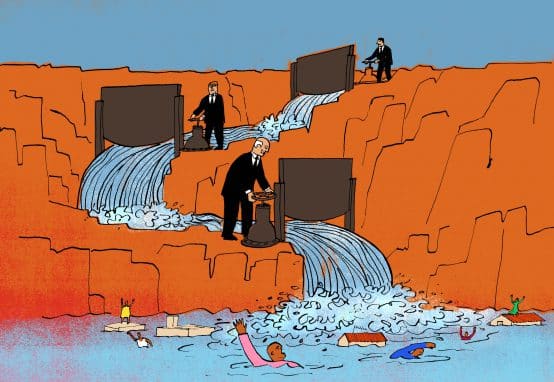 The March World Bank Group (WBG) document Forward Look: a vision for the World Bank Group in 2030 – progress and challenges prepared for discussion at the Bank’s Development Committee sets out the Bank’s long-term vision, focusing on ‘crowding in’ private sector investment and ‘creating markets’. It introduced the Bank’s new ‘cascade’ principles for infrastructure finance, which emphasise the use of private sector finance whenever possible, stipulating that it is needed to meet the purported trillions of dollars of infrastructure finance required to achieve the Sustainable Development Goals (SDGs). This echoes the strategy outlined in the 2015 From Billions to Trillions document produced by six multilateral development banks (MDBs) and the IMF detailing how billions in official development assistance could be used to leverage trillions from private investors, particularly long-term institutional investors, which have been unwilling to invest to date. The call to scale up private finance was reiterated in the 2017 outcome document of the Global Infrastructure Forum (GIF, see outcome document) a forum that engages the UN as well as the larger official financiers.

The Forward Look explained that “to maximise the impact of scarce public resources, the cascade first seeks to mobilise commercial finance, enabled by upstream reforms where necessary to address market failures and other constraints to private sector investment at the country and sector level. Where risks remain high, the priority will be to apply guarantees and risk-sharing instruments. Only where market solutions are not possible through sector reform and risk mitigation would official and public resources be applied [emphasis added].” The Forward Look added that “the WBG is taking the lead in harmonising approaches to applying the cascade principles across MDBs”. The International Development Association’s (IDA, the World Bank’s low income country arm) turn to the capital market for resources and its newly created private sector window are examples of the deepening of the approach within and outside the Bank (see Observer Winter 2017).

Underscoring the Bank’s expansive vision for the cascade principles, the document stressed that “the approach is currently focused on infrastructure but will be expanded to finance, education, health and agribusiness”. As outlined in a 2002 NGO Social Watch article by the former UN Special Rapporteur on adequate housing titled Privatising human rights, CSOs and the human rights community have grave and long-standing concerns about the increased reliance on the private sector in the above-mentioned sectors (see Observer Summer 2016).


far from the private sector coming to the rescue of the public, the reverse is the caseNick Hildyard, Corner House

According to Nancy Alexander of the German political foundation Heinrich Böll: “The G20 sees massive infrastructure investment as one of the ‘silver bullets’ that can … add $2 trillion to the global economy and create millions of jobs” (see Observer Spring 2016). A January article in finance magazine World Finance noted that “following the global financial crisis, a downward trend in interest rates set in across most developed countries, a situation that persists to this day. Given the duration of such low rates, even naturally risk-averse investors, such as pension funds and insurance companies, have become increasingly interested in diversifying a portion of their portfolios into higher-yielding investments in emerging markets,” adding that “investors have woken up to emerging market infrastructure as a type of investment where they would like to increase their share”.

The equity and democratic governance consequences of presuming that private and public interests are necessarily aligned and the implications of the push to develop infrastructure as an asset class are fundamental civil society concerns. As noted by Nick Hildyard from UK-based group the Corner House in an August 2016 blog, CSOs fear that “far from the private sector coming to the rescue of the public, the reverse is the case”. Focusing on guarantees used to attract a private sector that refuses to invest, Hildyard stressed that “key to such re-engineering is the provision of publicly guaranteed income streams [through mechanisms that] provide private companies with contract-based rights to flows of public money for many years, if not decades.” Hildyard highlighted that the governance impact of the cascade is undemocratic and elitist: “undemocratic because a handful of fund managers and rich investors increasingly determine what gets financed and what does not” and “elitist because the facilities that would most benefit the poor do not get built”. As an example he referenced a 2009 report for a New Partnership for Africa’s Development and OECD ministerial meeting, which admitted that it is “futile” to seek private investors for rural electrification projects “due to the low returns on investment”. Alexander stressed the need for high and guaranteed returns results in investors “cherry picking affluent clients, leaving the government to serve poorer clients without the benefit of cross-subsidies.”

In a 2015 article Antonio Tricarico of Italian NGO Re:Common and Xavier Sol of Belgian NGO Counter Balance argued that the income streams derived from public-private partnerships (PPPs), which are only financially viable for large projects, are needed to establish infrastructure as an asset class. They noted that these can then can be bundled and traded, highlighting that the creation of infrastructure as an asset class and the shift of the risk profile of investments are required to open the way for investment by long-term institutional investors such as pension funds. They maintained that the cascade principles support a third wave of privatisation stressing that “each guarantee further locks in the trajectory of privatisation: taking privatised public services back into public ownership incurs stiff financial penalties that act as a deterrent to renationalisation. Each guarantee also restricts government’s own ability to invest itself: PPP payments eat up health, transport and energy budgets.”

In a May Just Governance blog, Alexander cautioned that the cascade does not seek to determine “whether such financing would adequately serve the public interest, including sustainable development goals”, adding that “the cascade approach assumes that there will never be trade-offs between commercial goals and the public interest when de-risking reaches a point at which regulatory and policy reforms or risk mitigation become too costly, or too risky for stakeholders other than the private investor.”

A 2016 report by the Heinrich Böll Foundation on the recommended PPP contractual provisions produced by the World Bank for the G20 stressed that efforts to de-risk private sector investments result in a “favour[ing of] private interests to the prejudice of the public entities that are ostensibly the beneficiaries of the projects and services being contracted for.” Alexander commenting on the report alerted to “insufficient provisions for transparency and restriction of the state’s right to regulate in the public interest (for environmental, human rights or other aims)”.

Civil society fears that the mass displacement resulting from proposed projects such as the Delhi-Mumbai Industrial Corridor, which may affect up to 180 million people, combined with the Bank’s chequered record on meeting its obligations to displaced communities, will have catastrophic human rights consequences for millions of people (see Observer Spring 2015).  In a March op-ed for the US Miami Herald newspaper ahead of the Hamburg G20 summit, Zeid Ra’ad Al Hussein, the UN High Commissioner for Human Rights, lamented that while “Infrastructure, if well-conceived and implemented, is vital for the realisation of many human rights … human rights are rarely given more than lip service [in] the macho world of mega-infrastructure .”

Forward Look – A vision for the World Bank Group in 2030