Civil society letter to EIB board 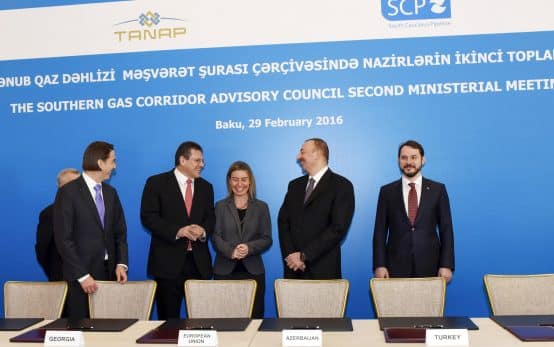 According to a September report by the Organized Crime and Corruption Reporting Project (OCCRP), “From 2012 to 2014 … members of [Azerbaijan’s] … ruling elite were using a secret slush fund to pay off European politicians, buy luxury goods, [and] launder money.” The scandal, dubbed the Azerbaijani Laundromat, saw $2.9 billion transacted through a series of shell companies. Among the Azeri politicians implicated in the scandal is first deputy prime minister Yaqub Eyyubov, who, according to OCCRP, has been tasked “with developing the oil-dependent country’s oil and gas strategy” since 2009.

In December, the World Bank’s board of directors approved two $400 million loans to Turkey and Azerbaijan, respectively, for construction of the Trans-Anatolian Pipeline (TANAP). TANAP will stretch across Turkey, accounting for more than half of the proposed Southern Gas Corridor (SGC), a mega-project that will convey natural gas from the Azerbaijan’s Caspian Sea region to Italy (see Observer Summer 2016). In December, the Bank’s Multilateral Investment Guarantee Agency (MIGA, the World Bank’s political risk insurance arm) also proposed a guarantee of up to $950 million for TANAP against the risk of the non-honouring of a sovereign financial obligation. This guarantee would provide potential de-risking for ‘yet to be named’ investors, and would help cover Azerbaijan’s required contribution of $750 million towards the construction of TANAP.

A September letter from four CSOs, including Counter Balance and BankWatch, to UK newspaper The Guardian published on 6 September suggested that covert payments to European politicians uncovered by the Laundromat scandal may be linked to the SGC, calling it the “elephant in the room” that has been absent from media reports. The letter stated, “Azerbaijan is particularly keen to present a positive image in Europe because it needs significant European support for its flagship project – the Southern Gas Corridor – despite the regime’s serial human rights abuses, systemic corruption and election rigging.” Decisions on proposed loans from European multilateral banks for construction of the SGC are imminent. The European Bank of Reconstruction and Development (EBRD) board is to vote on a $1 billion loan for TANAP’s construction on 18 October. The European Investment Bank (EIB) is due to consider a $2 billion loan for construction of the Trans-Adriatic Pipeline (TAP), the final leg of the SGC connecting TANAP to Italy via Greece and Albania, on 18 October, and is expected to vote on its proposed $500 million loan to TANAP by the end of the year.

“In addition to contributing to human rights violations in Azerbaijan and Turkey, NGOs have repeatedly highlighted that, in a post-Paris Agreement world, it is no time for public development banks to finance fossil fuel projects."Xavier Sol, Counter Balance

Additionally, a September letter from 25 CSOs, including Both ENDS and Crude Accountability, to the EIB noted, “In March this year, the Extractive Industry Transparency Initiative (EITI) suspended Azerbaijan’s membership as a result of a crackdown on civil society organizations. This was followed by the Azeri government deciding to quit the EITI.” Azerbaijan’s withdrawal from EITI came despite the World Bank’s board acknowledging in the chair’s summary of the TANAP loan approval in December, “the need for continued dialogue with Azerbaijan on [EITI] and ensuring that efforts are made towards restoration of its membership status.”

CSOs have been critical of multilateral development banks’ support for TANAP, owning to serious concerns about human rights violations in both Azerbaijan and Turkey and the negative environmental impact of the SGC project (see Observer Summer 2016). Xavier Sol from Counter Balance said, “In addition to contributing to human rights violations in Azerbaijan and Turkey, NGOs have repeatedly highlighted that, in a post-Paris Agreement world, it is no time for public development banks to finance fossil fuel projects. In addition, this project – if completed – would do little to provide additional energy security to the European Union, and would be detrimental to the diversification of the Azeri economy.”

Civil society letter to EIB board