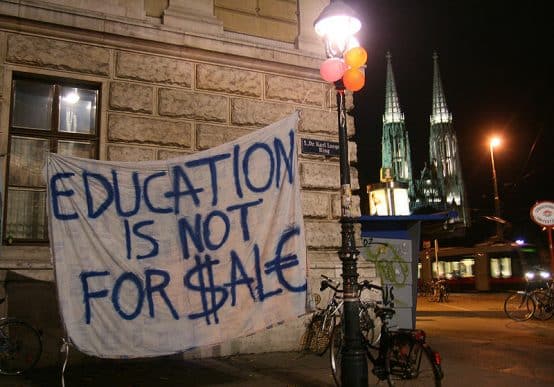 Student protests at the University of Vienna in october 2009. Credit: Manfred Werner - Tsui

A July global report, Reclaiming policies for the public, by the Civil Society Reflection Group on the 2030 Agenda for Sustainable Development, concluded that “privatisation and corporate capture have become obstacles to progress under the 2030 Agenda”, whilst finding “that public finance has to play a vital role in achieving the SDGs [Sustainable Development Goals].” In a press release on the launch of the report, Public Services International (PSI), the largest global union for public service workers, stated that “the combination of neoliberal ideology, corporate lobbying, regressive fiscal policies, tax avoidance and tax evasion has led to a massive weakening of the public sector and its ability to provide essential goods and services.” The report noted budget constraints resulting from austerity policies make it impossible for most countries to “Leave no one behind”. The report further argued that proponents of privatisation and public-private partnerships (PPPs), such as the World Bank, use these trends to “present the private sector as the most efficient way to provide the necessary means for implementing the SDGs, instead of suggesting policy change. In April the Bank launched its “cascade” approach which focuses on “leveraging” private monies for the public good and foresees the increased use of PPPs, “a financing formula originally designed for infrastructure that is being extended to the health and education sectors” (see Observer Summer 2017). The recent trial outsourcing primary and secondary education to private providers in Liberia illustrates some of the potential pitfalls of this model.

Education PPP in Liberia under scrutiny

In July, education minister George Werner declared the ‘early successes’ of a new education initiative, the Partnership Schools for Liberia (PSL), in which eight non-state operators manage 93 public primary schools (see Observer Summer 2016). However, an August report reviewing PSL by Education International, a Global Union Federation for teachers and education employees, concluded that “privatisation of the entire primary and pre-primary education system will expose Liberia’s public education system to grave risks”, whilst putting “increased power in undemocratic, private institutions”. A September evaluation report evaluation PSL by the global think tank Center for Global Development (CGD) found that “after one year, public schools managed by private operators raised student learning by 60 percent compared to standard public schools”. However, the government assigned 37 per cent more teachers to PSL schools than non-PSL schools, including first pick of better-trained, new graduates. CGD found that performance varied across operators and costs were high. Additional spending per child, on top of $50 provided by the government, ranged between the operators from $40 at Omega Schools to $663 at Bridge International Academy (BIA), which critics say is unsustainable. The study also found that, “contracts authorized the largest operator [BIA] to push excess pupils and under-performing teachers into other government schools”, confirming civil society concerns about BIA’s operation model. “It does seem the outcomes fall far short of what would have been expected and there are serious questions raised about the sustainability owing to the high costs,” said David Archer of ActionAid UK to Devex. Archer followed saying that “Improvements are much less than lower-cost alternative reforms”. Anderson Miamen, from COTAE, the Liberian Coalition on Transparency and Accountability in Education, reacted “Clearly, the PPP approach was the wrong option in Liberia”, urging “the Liberian Government to abandon the PSL program and redirect its energy to pursuing more holistic and sustainable reforms that protect the rights of all children and improves learning outcomes across all levels of the education system.”

Clearly, the PPP approach was the wrong option in LiberiaAnderson Miamen, from COTAE, the Liberian Coalition on Transparency and Accountability in Education

In early August, 174 organisations worldwide called on investors, including the World Bank and the International Finance Corporation (IFC, the Bank’s private sector arm) to cease support to BIA, which is currently in court for operating schools illegally and failing to adhere to national education standards in both Kenya and Uganda (see Observer Summer 2016). Authorities in both countries have ordered the closure of Bridge schools. Milagros Lechleiter of RESULTS Educational Fund, commented “If the goal of the World Bank Group is to end extreme poverty and promote shared prosperity, the IFC should steer away from investing in for-profit, fee-charging, private schools targeting the poorest groups. While the IFC investments in these schools are comparatively small compared to the World Bank’s total funding in public education, it still signals an investment in education that promotes a system that marginalizes the world’s most vulnerable students and families through school fees”. Research earlier this year by RESULTS Educational Fund found that the IFC’s investments in private education “marginalises” the poorest (see Observer Spring 2017), whilst Education International urged the Bank to go back to basics and focus on funding established national education policy, rather than developing it (see Observer Autumn 2017 and Spring 2017).