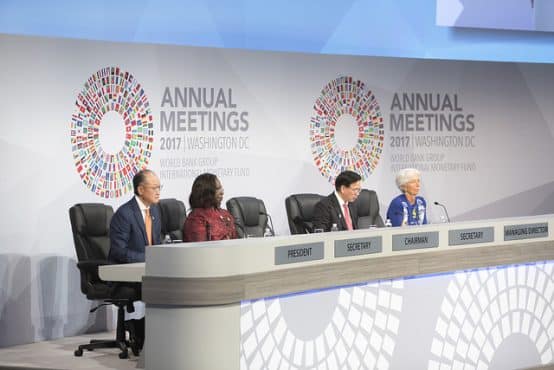 The tone of this year’s meetings was set by the new World Economic Outlook (WEO), which is cautiously optimistic in predicting stronger growth for the world economy, largely driven by improved prospects in the developed world and China and India. The report, tellingly titled Seeking Sustainable Growth, concluded that, while risks are more balanced, they remain “to the downside in the medium term”. In a veiled reference to Trump’s “America First” agenda and the rise of anti-trade sentiment in Europe, the report raised concerns about “high policy uncertainty”. Christine Lagarde, the Fund’s Managing Director, highlighted the threat to emerging economies, particularly those with increasing debt burdens, of higher interest rates in the developed world, which could result in an outflow of capital from emerging markets with dangerous spill-over impacts on the global economy. Indeed, apprehensions about worsening debt burdens have not dissipated, with China’s public and corporate debt remaining a worry. Of interest to the debt community, particularly given the alarm bells ringing about a the worsening debt situation, the IMF announced that its new debt sustainability framework, discussed in September and last reviewed in 2012, will be implemented in 2018.

The dog may yet bite – US challenges the Bank and Fund

In a case of what is good for the goose, is good for the gander, the Bank and Fund were brought under pressure from their principal shareholder, the United States. The US Treasury Secretary placed very strong conditions on US support for a capital increase for the International Bank for Development and Reconstruction (IBRD, the Bank’s non-concessional lending arm). In a statement released as official meetings got underway, Treasury Secretary Mnuchin noted that the US wants the Bank to focus its lending on low –income, IDA countries. In a direct challenge to China, he questioned why the Bank should lend to the country, which is the Bank’s largest borrower and is perfectly able to access capital markets. The US’s conditionalities attached to a capital increase to IBRD places the Bank’s president Jim Yong Kim in a difficult position, and was criticised by China, which called the decision “regrettable”. Outgoing German Finance Minister Wolfgang Schäuble echoed many shareholders in calling the IBRD capital increase “urgent”.

The Fund was not left unscathed by US criticism, with Mnuchin calling on it to focus more strongly on the impact of persistent trade imbalances on financial stability (a clear shot at China) and to support policies that foster private sector investment. Tensions between the US administration and the Fund have been building recently, particularly in light of the Fund’s much-publicised work on tax policy, which argues that taxing the wealthy can cut inequality without impacting growth, and highlights the room for more progressive taxation in the developed world – in contrast to the Trump Administration’s mooted tax reform plans. The US position could prove difficult for the Fund as it seeks to better integrate inequality and exclusion concerns into its programming. The US also refused to consider increasing the Fund’s resources, further antagonising China.

China’s reaction to the challenge will be closely watched. There is concern among Fund and Bank officials that the US attitude, coupled with persistent displeasure expressed by China about its lack of decision-making weight at the Bank and Fund, will continue to push it to strengthen alternative mechanisms such as the Asian Infrastructure Investment Bank, the New Development Bank (NDB), and the expansion of the Shanghai Cooperation Organisation, which recently accepted India and Pakistan as members. Lagarde has shown signs of concern about the withdrawal of American global leadership, and in July joked that she could see the Fund headquartered in Beijing in 2027.

The hopeful IMF Spring observed during April’s spring meetings, appears to have been transformed into potentially warm and nurturing breezes – at least at the Fund. Indeed, the Fund’s approach during the meetings led some to note that it had lost faith in the Washington Consensus (WC). The IMF now considers economic and gender inequality to be macro-critical, albeit only in some instances. It has concluded that the negative impact of Fund and state policies can “erode social cohesion” and lead to feelings of disenfranchisement by substantial sectors of the population. This feeds into “political polarization”, anti-trade sentiment and, over the longer term, can affect global macroeconomic stability. These are discussions focused on the need to ensure wide political support for global trade through policies that ensure more equitable distribution of benefits from growth. This focus was evident in the latest Fiscal Monitor, titled ‘Tackling Inequality’, which highlighted the imperative for improved progressive taxation in the developed world and the need to tackle illicit tax flows through more international cooperation on tax issues. The importance of combating gender inequalities in order to address inequality generally was a central theme of this year’s meetings, with Lagarde stressing that, “The most efficient way to reduce the inequalities would be to actually close the gender gap between men and women”. The degree of Fund concern with eroding social cohesion is also reflected in the fact that the Fiscal Monitor included an analysis of the potential benefits of universal basic income – an idea that would have been anathema to the Fund not long ago. Providing further evidence of the Fund’s concern, an entire chapter of the WEO was dedicated to the negative impact of part-time employment and temporary contracts on wage growth and thus aggregate demand. Labour-focussed civil society would have no doubt also welcomed more attention to the essential role of stronger unions and collective bargaining.

However, despite the Fund’s repeated assertions during the week that its programmes do not negatively impact social spending, human rights and gender equality, others produced evidence to the contrary prior to and during the meetings. While it is true that the Fund has not suddenly embraced the human rights-based approach to its policy-making and seems as far as ever from conducting ex-ante human rights impact assessments as suggested by the UN Independent Expert on Foreign Debt, the Fund has agreed to undertake an assessment of the distributional impact of its policies, beginning with tax policies and value-added tax in particular. Whilst fear of the anti-globalisation hordes has obviously motivated the Fund to attempt to change its approach, the Fight Inequality Alliance will continue to pressure the Fund – and Bank – to ‘stop fuelling inequality’ through policies on the ground.

The Bank bets on the Washington Consensus 2.0

Alas, hope for change at the Bank seems an exercise in futility. While the Fund was allegedly questioning its articles of faith, the Bank was happily proselytising about the miraculous power of WC 2.0, or Maximising Finance for Development (MFD), as the path to development nirvana is now called. While previously the Bank saw no useful role for the state, in its new incarnation the state does have a role: to assume the risks for private investors – not only through guarantees but also through ‘upstream work’ to attract financing from risk-averse institutional investors. The MFD approach received nearly unanimous support during Development Committee discussions and was also welcomed, although somewhat less enthusiastically by the G24. As noted by civil society, the approach is well-aligned with the needs and desires of G20 countries whose companies seek higher profits, and whose pension funds are in dire need of higher returns. While the newly released MFD specified that private sector investments must meet several criteria, including fiscal, social and environmental sustainability, civil society, developing countries and communities will be focused on how these aspirations will be operationalised.

Civil society raises concerns on the cascade and climate

Technical discussions between Bank and Fund staff and civil society on the institutions’ approach to public-private partnerships, a key component of the MFD, continued at this year’s meetings with several discussions and events held on PPPs. Civil society also released a PPP manifesto signed by 160 organisations from 45 countries calling on the Bank and Fund to halt their push for PPPs. The call for extreme caution was echoed in a statement by Francophone ministers of finance who noted that the cost and risk of PPPs “must fall”. Civil society reiterated its concern that the Bank’s strategy to de-risk private investment and IFC 3.0 seem to be supporting a race to the bottom in terms of social and environmental standards and a tax competition. In that regard the US vision of a streamlined and financially self-sustaining Bank is particularly worrying as it seems to push the Bank ever further from its development mandate. Mnuchin’s call for a more streamlined Bank looked at odds with his reference to improved social and environmental safeguards brought about (in the US’s opinion) by the new environmental and social framework (ESF) and encouraging comment about the role of the Inspection Panel. Given the increasingly important role of the IFC and MIGA in implementing the MFD, civil society was interested to hear about the IFC’s new development outcome measurement model, which is still being developed. In light of the complexities of IFC 3.0, and its focus on IDA and fragile and conflict-affected states (FCS), CSOs can only hope that they will be given the opportunity to contribute to the development of the new framework and implementation on the ground.

Meanwhile, CSOs campaigning for the Bank to actively implement the Paris Climate Agreement it has so often backed rhetorically, scored a victory when President Kim unexpectedly announced during the CSO townhall event – in response to a question posed on twitter during the event by a member of the BWP team – that the Bank will begin reporting on the aggregate carbon emissions of its investment portfolio next year. Lagarde provided the Fund’s perspective at the same meeting, highlighting the staggering fiscal cost of recent catastrophic storms in the Caribbean and elsewhere, and pointing to the need to develop new policy tools to tackle the long-term challenges posed by climate change. While CSOs working with The Big Shift campaign welcomed Kim’s announcement, they were keen to highlight that recent Bank lending trends are undermining the Paris Agreement, with fossil fuel lending accounting for a significant proportion of the World Bank Group’s energy portfolio between FY2014-2016. Additionally, the IFC’s support for financial intermediaries who are funding a new generation of coal power plants in developing countries remains a key concern of CSOs, with IFC’s Compliance Advisor Ombudsman (CAO, the IFC’s accountability mechanism) receiving its first climate change-based complaint during the meetings.

Concerns with engagement between CSOs and the Bretton Woods Institutions

As regards the evolution of civil society-Bank relations, things took a significant turn for the worse, with civil society expressing anger at the Bank’s last-minute cancelation of the scheduled Civil Society Policy Forum (CSPF) meeting on the ESF guidance notes and seeming effort to hand-pick participants in the proposed substitute lunch time discussion on a topic of great interest to the community. In light of the very disappointing developments, CSOs will no doubt be keen to revisit their level of engagement with the CSPF. On the anticipated results of election for membership in the CSPF working group established to address concerns raised in a CSO letter to the IMF managing director and Bank president ahead of the Lima annual meetings in 2015, civil society was disappointed to discover, also at the last minute, that results were not to be released during the meetings.