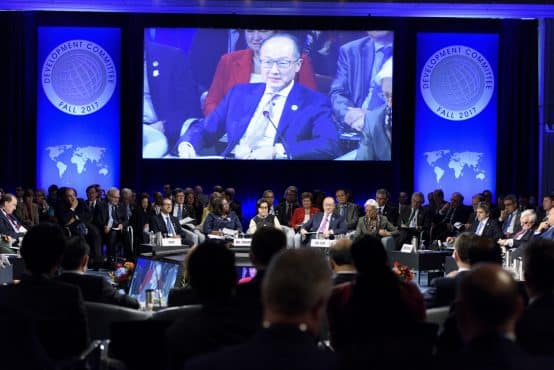 The Development Committee (CoDe) communiqué adopted a cautious narrative about the outlook of the global economy, echoing the IMF’s recent World Economic Outlook . Thus, despite global growth rates being revised upwards to 3.6 per cent – nearing pre-crisis levels – the communiqué identified a number of medium-term risks that threaten this ‘recovery’ acknowledging that, “high rates of inequality persist within and among countries, and stubborn pockets of poverty remain”. Echoing concerns raised throughout the meetings about waning support for multilateralism, the threat  of tax competition, rising debt and protectionist trade policies in developed countries, the communiqué noted that, “Complex, interlinked challenges also risk rolling back the important gains of recent decades in an increasingly interconnected global economy”. The communiqué suggested the World Bank (WBG) retains a unique multilateral position, with the technical expertise, influence and convening power to navigate these rough waters.

Relatedly, the communiqué expressed concern that over-lapping crises threaten to undermine global macro-economic stability. It noted, “Recent human losses and economic shocks caused by natural disasters, famine, conflict, and displacement demonstrate that hard-earned economic and social gains can easily be lost.” As this is made worse by the evident potential for new debt crises, the Development Committee called on “the WBG and the International Monetary Fund (IMF) to remain alert to the risk of debt distress amid the cyclical and structural headwinds that confront many developing economies, including through enhanced support for private investment in Africa.”

These are the questions that the communiqué raised, and the cascade (now formally known as “maximising finance for development”) is seen to be a big part of the answer. Thus, the committee asked, “the WBG to help countries maximize their development resources by drawing appropriately on private sector solutions to achieve the WBG’s twin goals and the Sustainable Development Goals (SDGs)”. The potential pitfalls of this approach are nothing new – and it’s increasingly evident that, whether its results are good, bad, or indifferent (i.e. ‘just a lot of hype’ as one senior Bank member was heard to say during this week’s Annual Meetings), the cascade is emerging as Bank President Jim Kim’s signature policy, that may go a long way towards defining his legacy.

The communiqué also highlighted the need to invest in human capital, in line with Kim’s recently launched Human Capital project and the World Development Report’s recent focus on the ‘crisis of learning’ in education. The need to redress gender disparities in the global economy is also highlighted, with the communiqué noting that, “Closing gender gaps for women in access to property, finance and decent work is critical for achieving the SDGs”. Here, the Women Entrepreneurs Finance Initiative (We-Fi) fund launched during this year’s Annual Meetings is listed as the flagship policy. As critics have pointed out that this policy is unlikely to reach the poorest women in developing countries, on this question (as in other areas) the communiqué seems to highlight half-baked WBG solutions to the global problems it articulates.

Perhaps nowhere is this more stark than in the communiqué’s discussion of global challenges posed by overlapping environmental and social disasters and ‘shocks’. The Development Committee highlighted, “the need for action to address challenges – climate change, migration and forced displacement, global health, as well as fragility, conflict and violence (FCV) – that threaten all countries. We applaud platforms such as the Caribbean Catastrophe Risk Insurance Facility, the Global Concessional Financing Facility and the Pandemic Emergency Financing Facility as examples of WBG leadership in helping countries apply solutions at national, regional, and global levels.” Leaving aside the mildly intriguing side-story that the United States – in its endorsement of the communiqué – has actually signed on to a statement that explicitly mentions the need to address climate change, the facilities mentioned are indicative of the Bank’s obsession with trying to solve such problems through global risk markets, which in the case of climate insurance has a mixed record so far, at best. The Bank’s approach doesn’t come close to providing the holistic policy toolkit that will be needed to undertake truly ‘climate resilient’ development. The disconnect with the opinions of borrowing countries is clear in the G24 communiqué’s call for “developed countries delivering on their commitment to provide US$100 billion per year new and additional financial resources by 2020 to support  developing countries’ climate actions”.

Finally, the communiqué acknowledged support for efforts to make the Bank more efficient, in order to address such challenges, stating that CoDe expected, “the WBG to continuously strive for improvement through initiatives such as the Environment and Social Framework [ESF] implementation, [and] the Agile program”, whilst, “Increasing efficiency and effectiveness are also critical to support the institution’s goals of reducing poverty and boosting shared prosperity in a sustainable manner.” This part of the communiqué skims over the tensions underlying this year’s Development Committee meeting between the United States and other members, with US Treasuary Secretary Steve Mnuchin issuing a statement on the eve of the meeting putting strong conditionalities on the World Bank capital increase that Kim has been lobbying for, and suggesting the Bank should re-focus its lending activities to mainly serve on IDA countries, and away from IBRD members (specifically China). Given this tension between the US and other shareholders, there is an open question about whether the push to make the Bank more ‘efficient’ will actually help it to meet it stated goals. Indeed, civil society organisations expressed concerns during the meetings that the Bank’s drive for increased efficiency and ‘agility’ under pressure from both borrowers and important shareholders will take it further along the path of becoming ‘merely’ another financing institution devoid of a development focus. Given ongoing questions about how the new ESF will be implemented, as well as how compatible the Agile approach’s principle of adaptive learning is for an organisation as legendarily difficult to shift out of its institutional practices as the Bank, there is a real risk that lending from a more ‘efficient’ WBG will itself be part of the range of factors driving potential medium-term macro-economic instability.