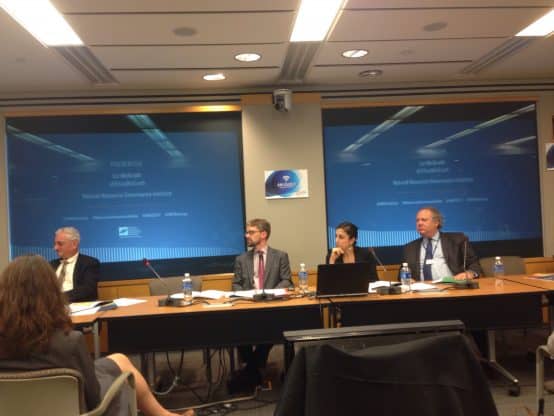 Effective governance of the oil, gas and mining sectors is a persistent challenge for resource-rich countries. What are the main challenges? How can we meet them? And who needs to be involved? The session explored these question through a discussion of the findings of the 2017 Resource Governance Index.

I’ll give a brief overview of the 2017 Resource Governance Index – the only international index dedicated to transparency and accountability in the extractives sector.

The index is based on a 149-variable questionnaire that was conducted in 81 countries, with data broadly split into categories of ‘value realization’ and ‘revenue management’. NRGI conducted additional research on the ‘enabling environment’, consisting of the broader transparency and governance framework across all the countries. Based on this data, the index creates governance rankings for all countries, ranging from ‘good’ to ‘failing’.

Countries that perform well in the index have a much lower gap between policy and practice – among the recommendations of the report is the need to focus on implementation.

Kaufmanm: there is a staggering gap in the index for African countries between the highest (Ghana) and the lowest (Eritrea) – Vera can you talk about why this is, and what the implications are?

In recent years, we’ve had a number of major announcements, including at COP21, where $100 billion was pledged to fund mitigation and adaptation activities for developing countries, as well as other initiatives. To do this, we need to mobilise donor money; in the meantime, we are not making much progress on the number of people living in acute poverty.

This index is painful reading for African countries. It makes you wonder: Are we really looking at the right issues and asking the right questions? We have failed to tackle the resource curse in Africa, and this has had major implications for development.

There is a question about how best to pursue the reforms that are needed. Passing individual pieces of legislation is difficult, and can result in fragmented governance. I’m interested in looking for ways to pass governance reform measures as a bundle, so that we can avoid this situation.

Where you see good governance across the board, it’s because the international context is helping to frame that. The Dodd-Frank roll-back (the Trump Administration attempt to repeal Section 1504 of the 2010 Dodd-Frank Act, which requires extractives industry companies operating in the US to disclose their operations and tax around the world) will likely decrease transparency. We need to keep the enabling environment within the international community.

There are so many countries in the bottom of the index in Africa – there is some comfort in being a group, even if everyone is on the bottom, as long as you don’t feel individual responsibility. So this index is valuable in being able to call individual countries out.

Kaufmann: Thomas – how do you address issues related to sovereign wealth funds, and the implementation gap, in your work with IMF?

One thing that resonates are the interlinkages between the decision chain and the value chain. As with any chain, it’s the weak link that is the biggest concern. If you have a good tax policy, but no implementation, that does not work. Corruption is also a key element of the governance picture, and this is an issue the Fund was reluctant to talk about in the past, which increasingly we are trying to tackle.

There are also limitations to a cross-country index like this – there are two risks:

1) We become obsessed with small movements in the index; are all the dimensions of the index really rigourous enough? Are there too many different variables; is it better to focus on a few key components?

2) What is missing is whether there are the right kind of rules that are in place. For example, Ghana scores quite well, but has faced an IMF bail-out which is related to the fact that it didn’t have good fiscal practices in relation to expected oil revenues.

Kaufmann: There is a 5-point margin for error in the index, so people should take that into consideration. It shouldn’t be about small movements but judging the whole governance picture of each country.  Isabel – can you talk about what are the key thematic findings of NRGI report, with a focus on voice and accountability in the civic space?

This report is a big contribution to governance; I want to pick up on the key point related to civic space and performance. There are regular attacks and violence that are present against national members of EITI (Extractives Industry Transparency Initiative) boards, and others fighting for accountability. There is significant progress to be made on this.

In terms of the global context – not even the best performers are immune to these problems. The Dodd-Frank Act finally brought in transparency in 2010, and Trump’s first act was to repeal Section 1504. US civil society had prepared a comment on this to the US EITI board, saying that corporate bodies of EITI would not disclose tax and project reporting if Section 1504 was repealed. When the CSO representative began to speak, her mic was shut down and the EITI meeting was closed. The US EITI board has not met since.

There is a role for World Bank and IMF, in terms of playing a normative role for how countries should be dealing with CSOs, and also in promoting contract disclosure.

Kaufmann: On the point of disclosure this does not incorporate 2017 data – the index only includes data from 2016 and before. Bennett – can you talk about what is happening in the current global moment in terms of the US administration’s impact?

Progress is never linear- there is a fundamental backlash against the progress of the last two decades. The resource curse is decades old in some countries, much older in others. In the last 20 years, civil society has led on significant reforms in transparency and governance in the resources sector, and we shouldn’t lose sight of that progress.

In 1996, Tony Blair called for an international governance body, and in 1999 EITI formed. This followed the founding of the Publish What You Pay network in 1993, which cannot be understated in terms of the impact that it has had. We are seeing nothing less than a war against civil society around the world. There is a reason for these attacks, from oppressive governments who see their wealth being threatened.

Dodd-Frank: the powers that be, that have been put on their knees by Dodd-Frank, have taken the teeth out of it. It’s hanging by a thread. We need to try to save Section 1504 if we can, but if not, we have to move forward on the global scene without support of the US for the next two to three years.

Kauffman: Just to explain to the audience, Section 1504 is a key section of Dodd-Frank that requires companies operating in the US and elsewhere to disclose their operations and tax payments. Does it makes sense for IFIs not to fund countries that are not part of EITI?

Baunsgaard: At the IMF, we don’t provide funding for extractives, so we are more concerned with what happens with what the government gets. We are focused as well on corruption. We have just completed a guidance note for staff on how to address these problems in terms of advice to governments.

Former World Bank Executive Director from Venezuela: How important are natural resources to government resources – this should be included in the index! There is also a question of how to interpret the data; the last time we heard heard about Venezuela’s sovereign fund it was used to buy $6 billion in military equipment. Is this really a positive?

Nigerian CSO: We don’t only have oil, but also precious stones (so the index does not account for all natural resources). I would prefer a more direct strategy, rather than waiting for the government to reform.

Guyana CSO: Exxon has made a recent discovery of an oil field in Guyana: the World Bank has two primary goals – eradicating poverty and shared prosperity. We have never had policy in this area; how can we protect ourselves from the resource curse, and falling into a situation like Venezuela is in now?

Peru CSO: There are many reports that state that you have to keep oil in the ground. This is not easy for the developing countries to hear – as we haven’t contributed as much to climate change and have energy needs. What is the balance between extractives governance and fighting climate change?

Ghanaian World Bank staff member: Governments are getting smaller revenue from extractives because they are not negotiating better with companies in these contracts. Corruption is a two-way dance, it takes two to tango. What can we do about corruption among the companies?

Freeman: Regarding Guyana – there is a historic opportunity for the government to chart its own course. They can be in driver’s seat, and demand the highest level of disclosure and revenue. Regarding Peru – you put your finger on a couple of issues that all developing countries have been faced with. It’s just appalling that the US has taken funding away from Green Climate Fund for developing countries to develop new sustainability and technology to help them adapt to climate change.

Munilla: I endorse Bennett’s comments on Guyana. The Canadian and UK governments have ignored the repeal of the Dodd-Frank rule. There are also a lot of corporate supporters for those regulations. Exxon, where it has an EITI requirement, it does abide by them. Regarding corporate accountability – you start with their own commitments, and look at implementation and see if there is any variance to this, and call attention to this.

Baunsgaard: Regarding Guyana, we’re working with them and the government says it does not want to repeat mistakes of others. But they have challenges with managing their fiscal regime. It helps to have transparency. On the climate change issue – despite the road not being linear, we are looking forward to a carbon-free future: It’s not a matter of if but when.

Kaufmann: Guyana has applied to join the EITI – use it! It improves transparency. Let’s not only look at NRGI, this new index should be used by civil society as an empowering tool for change.