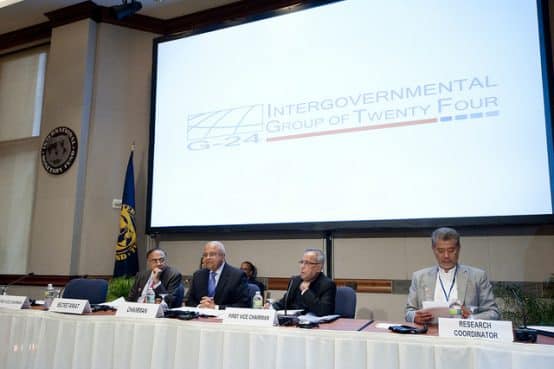 BWP analysis of the G24 communiqué, issued on 12 October. The G24 is a grouping of some of the most influential developing countries in the World Bank and IMF. It includes G20 countries such as India, Argentina, Brazil, Mexico, and South Africa, and also Egypt, Iran, Nigeria, Venezuela, as well as a number of other countries. The G24 communiqué is traditionally the first statement of the meetings.

In its communiqué the G24 welcomed “the increasing momentum in global growth, trade and investment”, whilst stressing that emerging market and developing economies (EMDEs) “continue to account for the bulk of global growth”. Like the World Economic Outlook (WEO), the G24 raised concerns “about the medium-term downside risks”, such as an “increase in protectionism, a sudden tightening of global financial conditions, roll backs of regulatory reforms, and geopolitical risks”. The communiqué stressed the importance of “International cooperation and policy coordination”, including for developing countries affected by the refugee crisis, as well as “effective international tax cooperation”, to minimise “adverse spillovers on growth and financial markets”. In calling for a “Multilateral commitment” to maintain an “open, rules-based trading system”, the G24 expressed itself against US trade policy. In concert with concerns raised by the Indonesian Finance Minister during a debate on the state of the global economy during the meetings, the communiqué called “for more attention to developing fair tax rules to guide the taxation of multinational corporations and for international cooperation to prevent harmful international tax competition”.

The document further encouraged multilateral support for upgrading the UN Tax Committee to an intergovernmental body. In that regard the communiqué is a clear reaction to uncertainty about US policies and an erosion of support for multilateralism, a fear echoed by IMF Managing Director Christine Lagarde on numerous occasions during the meetings. The communiqué is also replete with calls for a more equitable multilateral system, in which G24 members are given decision-making power commensurate with their economic and geopolitical importance.

More than in previous communiqués, the G24 reconfirmed the importance of international financial institutions (IFIs), noting that the “IMF is central to the Global Financial Safety Net”, calling for an “adequately-resourced IMF” and safeguarding the “financial strength of IBRD and IFC”. The call for adequate resources for the Bank and Fund seems a response to the US Treasury Secretary’s statements during the annual meetings, which called for a self-sustaining World Bank and requested a review of IMF operations and resources. In light of the 2018 review of the IMF’s Facilities for Low-Income Countries (LICs), the G24 called for an expansion of “the resources of the Poverty Reduction and Growth Trust”, and introducing a “precautionary instrument for LICs”.

Perhaps echoing growing concerns about the deteriorating position of many emerging and developing economies in the wake of the fall in commodity prices, the G24 welcomed the reform of the Joint World Bank-IMF Debt Sustainability Framework for LICs, noting it is “essential for the debt sustainability assessments to consider the quality of public investments and the significant impact of reducing infrastructure gaps on growth”. Clearly following up on the Fund’s more flexible approach to the use of capital controls and growing concerns about a tightening of policy in the US and Europe, which is feared could result in an outflow of investment from developing countries, the G24 “welcome[d] the IMF’s review of country experiences in addressing systemic risks arising from volatile capital flows”, whilst calling for a “fair assessment” and “design of macroprudential and capital flow management measures”.

The G24 highlighted the vulnerability of developing countries to the impacts of climate change by noting “the recent devastating hurricanes that hit the Caribbean” stressing that “extreme weather events have substantial adverse human and economic consequences in developing countries”.  It called for “all countries to implement the Intended Nationally Determined Contributions under the Paris Climate Agreement”, which should reflect “the principle of common but differentiated responsibilities”. The G24 echoed the WEO in calling for a “strong global response” in “supporting the efforts of developing countries to cope with and build resilience to climate-related natural disasters”, urging for developed countries to deliver “on their commitment to provide US $100 billion per year new and additional financial resources by 2020 to support developing countries’ climate actions”. Taken as a whole, the statements offer a strong riposte to the US’s announced withdrawal from the Paris Agreement, as well as the Trump administration withholding the US’s remaining $2 billion in commitments to the Green Climate Fund.

Consistent with long-standing calls for support in diversifying economic prospects away from commodity dependence, the communiqué asked for assistance in “improving productivity and diversifying sources of growth, such as through the agricultural transformation of the African Caucus and the G20 “Compact for Africa” – now renamed the Compact with Africa –, whilst calling for support on “human capital development, skill building and labor market policymaking”. In line with much recent focus on the growth potential to be had through greater inclusion of women in the economy, the document noted the importance of “greater financial inclusion and economic opportunities for women”.

As in previous years, the G24 reiterated the need to scale up infrastructure investments, including making renewable energy affordable, noting the “increasing efficiency of public investments in infrastructure”. This call for support to public management systems is something that was obvious by its omission on World Bank discourse and G20 approaches, which tend to focus nearly single-mindedly on leveraging private sector financing for infrastructure. That said, the communiqué did also note the role of the MDBs in “catalyzing private sector financing”, and welcomed the Bank’s “focus on maximizing financing for development” with interest in “new risk mitigation instruments”.

Given the state of the migration debate in Europe and the US and the rise of anti-migration sentiment in both continents, it is not surprising that the G24 called on the IFIs to monitor and address the macroeconomic and development consequences of tightening migration regulations in some countries” and to ensure discussions about money laundering and corresponding banking relationships expand beyond a focus on terrorism and also result in “strong multilateral cooperation to combat illicit financial flows”. Given that developing countries are most affected by tax evasion and avoidance, the G24 welcomed the work of the Platform for Collaboration on Tax and “enhanced technical assistance” and urged the IMF and the Bank to continue its assistance in improving domestic resource mobilization, “inclusive growth through progressive tax policies”, and “better targeted public spending”, whilst assessing “the social and distributional impact of fiscal adjustment programs” to include “adequate social protection measures for the poor”.

As was to be expected, and consistent with long-standing calls, the G24 underscored the need for a revision the governance structures of the Bank and Fund, so that of the growing weight of EMDC in the global economy is reflected, while protecting the quota share of the poorest countries. The communiqué raised specific dates they expect to see reforms in the governance-structures of the BWIs, such as the IMFs “completion of the 15th General Review of Quotas, including a new quota formula, by the Spring Meetings of 2019 and no later than the Annual Meetings of 2019”. The G24 repeated its call for “evenhanded surveillance and lending decisions” and for the IMF’s Evenhandedness Committee’s mandate to be extended and include the Fund’s lending activities, which was established in 2016 after a surveillance review found “significant and long-standing perceptions that the Fund is not evenhanded”. Finally, it  stressed the need for a Shareholding Review that upholds the Istanbul Principles to achieve equitable voting power between developed and developing and transition countries.