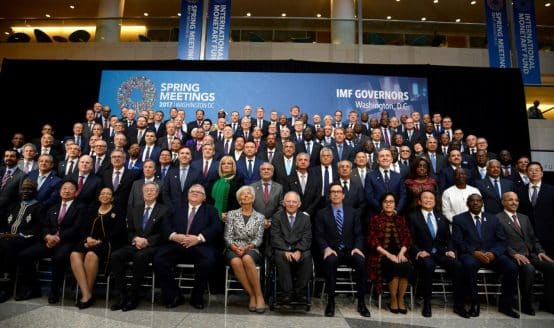 Finance ministers and bank governors pose for a "family" photo for the International Monetary and Financial Committee (IMFC), as part of the IMF and World Bank's 2017 Annual Spring Meetings, in Washington, U.S., April 22, 2017. REUTERS/Mike Theiler

Analysis of the IMFC communiqué, issued on 14 October. The IMFC is the direction-setting body of finance ministers for the IMF. The communiqué of the IMFC sets out the consensus position about the direction of the Fund and reform. The ministerial statements to the IMFC, often revealing of the true differences of opinion amongst the IMF’s membership, are also made available online.

As the title of the Spring World Economic Outlook (WEO) asked whether the global economy was gaining momentum, the Autumn WEO seemed to answer with a resounding ‘Yes, but how do we make it sustainable?’ While it found the upswing in economic activity strengthening, with global growth projected to rise to 3.6 per cent in 2017 and 3.7 per cent in 2018, with a notable pickup in investment, trade and industrial production, the medium-term economic risks were deemed to tilt “to the downside”, as interest rates, debt burdens and geopolitical tensions rise. Thus, whether in good times or bad, the International Monetary and Financial Committee’s (IMFC) message in its Annual Meetings communiqué is to use this “window of opportunity” to get on with the familiar structural reforms and financial buffer-building, in the hopes that business as usual will perhaps this time lead to sustainable growth. Welcoming the Managing Director’s policy agenda, the communiqué stressed the important role the IMF plays in helping countries “seize this window of opportunity”.

The communiqué put all policy tools on the table, including fiscal policy that “avoids procyclicality” and monetary policy that includes “flexible exchange rates to serve as shock absorbers”. Yet, structural reforms are still the name of the global policy response game, aimed at “lifting productivity, growth and employment, promoting competition and market entry, and enhancing resilience”.

While earlier in the year finance ministers dropped tougher language that vowed to “resist all forms of protectionism” to appease the US administration’s objections reflecting their ‘America First’ policy stance on trade, this time the IMFC took an ever-so-slightly braver stance. It reaffirmed its commitment to “communicate policy stances clearly and avoid inward-looking policies” and, perhaps when US Treasury Secretary Mnuchin was in the bathroom, even managed to sneak in a reference to the conclusions on trade of the G20 Hamburg Summit, which committed to “continue to fight protectionism including all unfair trade practices”.

Further emphasising the need for enhanced multilateral cooperation rather than isolationism, the IMFC committed to work together to “achieve a level playing field in international taxation [and] address tax and competition challenges”, encouraging the Fund’s efforts through the Platform for Collaboration on Tax, as well as dealing with the macroeconomic consequences of “illicit finance, pandemics, cyber risks, climate change and natural disasters, energy scarcity, conflicts, migration, and refugee and other humanitarian crises”. That said, the IMFC obviously did not mention supporting the G24 calls for a UN Tax body.

In what is fast becoming the laboratory of operationalising IMF research, the IMFC encouraged the further enhancement of surveillance, through piloting everything from fiscal space assessments to applying the infrastructure policy support initiative, aimed at helping countries evaluate the implications of infrastructure investments. While this piloting approach in surveillance has already raised civil society concerns on policy advice relating to both income and gender inequality, the IMFC is to learn its first official lessons on this in its upcoming Interim Surveillance Review.

Despite the Fund’s best efforts to emphasise gender and economic inequalities during Annual Meetings, from the Fiscal Monitor’s remarkable single-minded focus on the issue to several executive directors and Lagarde stressing that  they see inequality as the IMF’s “core work”, the IMFC’s communiqué was rather ‘inequality light’. It was only explicitly mentioned once, with the IMFC stating that it “supports the Fund’s work on inequality”. It did however clarify that the Fund should not just look for growth, but ensure “strong, sustainable, balanced, inclusive and job-rich growth” that must be shared widely. It also noted that it supports the IMF’s work towards the 2030 Agenda for Sustainable Development, but only where relevant to it mandate, and only in relation to low-income countries and small and fragile states (apparently missing the memo the Sustainable Development Goals are applicable to all countries). It is fair to say therefore that the IMFC’s communiqué did not seem to jump on the inequality bandwagon.

Rather than declaring an “immediate moratorium on all debt payments for the next six months” for countries hit by recent natural disasters, as called for by civil society, the members of the IMFC expressed their sympathy to those impacted and welcomed the IMF’s readiness to assist, in particular by helping to unlock their growth potential.

Other operational issues to which the communiqué called attention included welcoming the review of the Debt Sustainability Framework (DSF) the Fund completed last week, which it expects to be operational in the second half of 2018. Civil society acknowledged that the DSF included some positive changes but still ignored significant issues, to the extent that even the Bank and Fund admitted the new assessments would still have missed 1-in-5 crises, risking more unforeseen debt crises in future.

Despite Mnuchin’s call for the IMF to “make tough choices” and review its operational costs, the IMFC reaffirmed its commitment to an adequately resourced IMF and supported the expansion of the Fund’s role in the global financial safety net, exploring possible “enhancements” to the IMF’s lending toolkit. Simultaneously, it emphasised the importance of the IMF’s collaboration with other multilateral institutions in pursuit of shared objectives, perhaps in a nod to the recent IEO report that found the Fund’s inter-institutional collaboration lacking. This division between expanding the Fund’s in-house capacity versus deferring to other organisations’ expertise has recently become a recurring theme playing out between members of the IMF executive board, exposing the evolving and different views on the role the Fund should play after the 2008 financial crisis.

As is now common, the communiqué ended by reiterating its support for the promotion of gender diversity in the Fund’s board, which now includes two women out of 24 members, or less than ten per cent. The board seemed to have few answers to its woeful performance on the issue of its gender composition when challenged by civil society during Annual Meetings.

Please find the attendance of the IMFC meeting and the accompanying ministerial statements here.