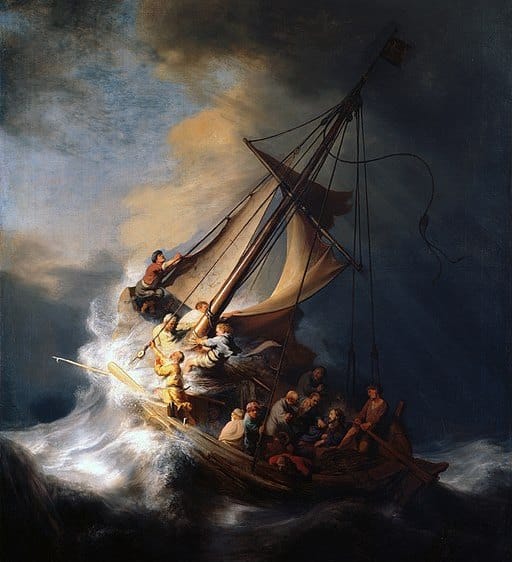 Rembrandt's The Storm on the Sea of Galilee. Credit: Wikimedia Commons

This year’s annual meetings take place in the shadow of continued uncertainty about the global economic and political landscape, including increasing concerns about high levels of public and private debt and the inability of developed countries to escape the “new normal”. Luckily, the Bank and Fund seem to have found a silver bullet: along with the G20, they are betting heavily on the power of mega-infrastructure to drive global growth. The prospect of the Bank’s new role as ‘market maker’ has resulted in giddy excitement at the possibility of ‘win-win’ arrangements with the private sector. The change of US attitude toward the Paris Agreement will also shape the meetings’ context, as will the recent series of catastrophic storms, giving the economic, political and social impacts of climate change more prominence. The Fund meanwhile seems happy to continue to nurture the flowers of the “IMF spring” without yet grasping how tackling inequalities and moving beyond a focus on growth and fiscal discipline would fundamentally change its role and work.

As the World Bank and IMF prepare to meet in Washington, we set out the key issues for the week.

The “new mediocre” in uncertain times

This year’s World Bank and IMF annual meetings take place in a less fearful environment than was the case last year. Much of the ‘anti-globalisation philistine hordes are at the gates’ anxiety, which weighed heavily on last year’s annual gathering in Washington, seems to have subsided somewhat. Despite some positive signs in certain areas of the global economy, however, the IMF noted in its July World Economic Update that risks “remain skewed to the negative side over the medium term.”

World Bank and IMF officials are not alone in their quest to understand the ramifications of a world order marked by America’s ‘anti-trade’ rhetoric, but not necessarily its action to date, and China’s outspoken support of globalisation. Concerns about the threat of American withdrawal from its global leadership position are reflected in IMF Managing Director Christine Lagarde’s recent ominous statement that, “Nature does not like a vacuum, and wherever you leave a vacuum, somebody is going to fill it.”

Continued lacklustre global economic performance has resulted in increased concerns about rising debt levels, with the Financial Times noting in September that “a decade on from the beginning of the financial crisis, the world has the makings of a fresh debt crisis”. Debt concerns extend to China’s private as well as public debt levels. Coupled with geopolitical instability resulting from, among others, the North Korean “missile crisis”, the continued so-called “European migration crisis”, continued instability in the Middle East and North Africa regions and the performance of the far right in various European elections, these trends are cause for worry at the Bank and Fund.

While China is not out to upend the established order, on which it continues to depend, as evidenced by President’s Jinping statement at Davos, the impact of China’s efforts to gain global economic and political influence at the cost of the US and Europe is much talked about. These competing trends impact the Bank and Fund. While both continue to overwhelmingly represent the interests of the developed world, they must also engage and seek accommodation with China for fear of losing influence and business opportunities. This is also the case with Europe and the US, as evidenced by the enthusiastic European engagement with the Asian Infrastructure Investment Bank (AIIB). The CSO community, echoed by a UN independent expert, have noted that the much-discussed ‘race to the bottom’ in terms of due diligence and environmental and social protections resulting from ‘cooperative competition’ between the Bank and the AIIB is well and truly underway. They’re just hoping this won’t weaken the Bank’s Action Plan on combating gender-based violence in projects it is funding.

Storm clouds gathered … will the Bank lead on the Paris Agreement?

Many fear that the Bank’s cooperation with the AIIB and other multilateral development banks (MDBs) to push for a mega-infrastructure drive will have catastrophic consequences for efforts to meet the climate change targets agreed in Paris. In light of the recent change in the US position, as seen by its willingness to consider withdrawing from the Paris Agreement, and, given that the meetings take place in the immediate aftermath of devastating floods in South Asia and storms in the US and Caribbean, climate change is certain to feature prominently in this year’s meetings. The US position notwithstanding, civil society remains of the opinion that the Bank has much to do if it is to lead the transition to a zero carbon future. While it has supported renewable energy projects and developed a framework for climate action, civil society will be keen to remind the Bank of the IFC’s investment in coal through financial intermediary lending, the continued existence of fossil fuel investments in the Bank’s portfolio and its less-than-stellar reporting standards for the carbon footprints of its projects and programmes (including Development Policy Lending). In response, ahead of this year’s annual meetings CSOs aligned with the Big Shift Campaign are pushing the Bank to shift its operational activities in line with the Paris Agreement.

In no small part driven by the ‘competitive’ dynamics and under pressure by key shareholders and borrowers alike, the Bank will continue to move forward with the ‘agility agenda’ outlined in last year’s Forward Look document. The trend is clearly demonstrated in July’s agreement by the board to management’s proposal for a Multiphase Programmatic Approach (MPA), in which the Board will no longer be required to approve every project. Leaving aside the appalling lack of consultation with civil society on an important change in procedure and oversight, civil society will bring the Bank’s attention to the fact that adaptive learning requires more than delegation of authority and support for staff decision-making.

The question of accountability will also be germane for discussions about the MFD approach and its application by IFC in fragile and conflict-affected states (FCS). As has been well documented by civil society, the IFC has had significant challenges in ensuring client compliance with its own Performance Standards – and this is in middle income countries. Civil society is therefore extremely concerned about the implications of the cascade approach in FCSs and will be keen to have additional details on the proposed operationalisation of IDA’s new private sector window.

The road towards inconsistency… The future of the IMF Spring

With apparently no sense of contradiction, the Bank and Fund will, alongside privileging wealthy asset owners by focusing on ‘leveraging private sector investment for development’ and overwhelmingly promoting fiscal consolidation, also spend much time discussing inequality, ‘shared prosperity’ and inclusive growth at several inequality events. Civil society will be following the discussions closely, particularly as regards the IMF. As noted by some, recent IMF research and policy advice have resulted in what some consider a change in Fund attitude in which neoliberalism is questioned, distributional impacts of tax policies are considered and the falling share of income going to labour is discussed. IMF policy advice is now provided on tackling ‘patriarchal attitudes’, gendered conditionalities are included in loan programmes and the Fund even claims to indirectly promote human rights (see BWP’s The IMF and Gender Equality: A Compendium of Feminist Macroeconomic Critiques). On the surface, this is indeed not Lagarde’s grandfather’s IMF. While the IMF will embark on its first interim comprehensive surveillance review, civil society will be looking for policy and programmatic actions that are comprehensive and coherent, as the Fund has a long road to travel before it can claim credit for playing a positive role in creating a more equal world.

Meanwhile, finance ministers of the eurozone are scheduled to discuss plans during annual meetings for converting the European Stability Mechanism in a fully-fledged European Monetary Fund, replacing the functions of the IMF for providing bailout monies to countries that use the euro. Given the Fund’s experience in Greece, perhaps many within the Fund and developing countries would be happy to see the Fund extracted from its convoluted and troublesome programmes in Europe. The Fund’s charm offensive in Greece is a clear case of way too little, way too late, while its continued antagonism to labour rights seems sadly a more accurate indication of the direction in which the IMF Spring is headed.

Transfer the risk to someone else, and investors will come…

Given the woeful state of the world economy and the supposed lack of fiscal space in a great many countries, it is little wonder that the theme of this year’s annual meetings will be a reinforced focus on ensuring the sluices of the 2016 cascade are open to allow for a sovereignty-eroding flood of private sector finance to countries which are told they have no other options. The difficult fiscal conditions of many countries are partly the result of the unwillingness of developed countries and the Bank and Fund to develop an equitable global tax structure, as seen by the inclusion of low corporate taxes in its much-criticised Doing Business report. The impact of highly subsidised and guaranteed income streams for private sector investors supported by the Bank’s cascade approach may just change investors’ risk-reward calculations sufficiently to result in an increase in investment. One supposes democratic governance and affordable and equitable delivery of essential services for the poor and marginalised, such as education, are a small price to pay for the cooperation of private sector ‘development partners’. After the very narrowly focused World Development Report on education, civil society suggested the Bank goes back to basics and focuses on funding established national education policy, rather than developing it.

As one of the cascade’s favoured instruments, the Bank’s push for PPPs, such as Liberia’s heavily questioned education PPP, is expected to continue despite what some in the Bank privately admit (along with much academic, civil society, IEG and even IMF research) is a lack of evidence documenting their benefit. The Bank has scheduled several events on the ‘from Billions to Trillions agenda’ and will apparently unveil more details on its Maximising Finance for Development approach during the annual meetings.

For BWPs full annuals coverage visit the Bretton Woods Meetings Dispatch, for a full schedule of official events see this page and for coverage of the civil society policy forum meetings and seminars highlights see this page.