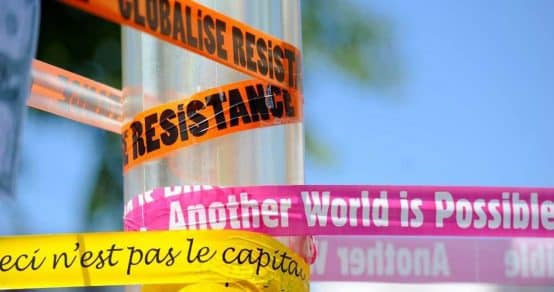 The slow recovery from the 2008 global financial crisis continued to shape the international economy in 2017, further eroding the policy space available to most states. Restricted fiscal space and debt concerns thus increased the importance of the Bank and Fund in shaping the global agenda. Their influence was further strengthened by increased coordination among international financial institutions, ranging from tax policy to turning ‘billions to trillions’ by leveraging private sector investment in the name of development through policies that de-risk or otherwise attract ‘idle’ savings.

As we reported in 2016, the arrival of 2017 was met with anxiety by the global elite, including the Bank and Fund, who feared the worldwide rise of anti-globalisation sentiment. Concerns about the stability of the economic system, which the Bank and Fund were created to safeguard, were exacerbated by the continued lacklustre performance of the world economy in 2016 and cautious projections for 2017.

While the fear dissipated somewhat after the defeat of the far-right in France and the Netherlands and the lack of any singularly destabilising action by the Trump administration, the Fund and Bank spent the year defending trade and globalisation, while their rhetoric focused on the perils of inequality and need for inclusive growth.

Further contradicting the Fund’s focus on inequality, civil society continued to highlight the detrimental impacts of IMF conditionality around the world, such as its role in significantly weakening labour rights in Greece, cutting bread subsidies in Egypt, and decreasing health sector expenditures in poor countries.

2017 saw a continued push by development institutions and states alike for private sector-led growth and mega-infrastructure as the antidotes to the slow recovery from the 2008 financial crisis and, hence, the (at least momentary) appeasement of those agitating for substantial change. Within that disturbing context, civil society remained concerned that the structure and trajectory of the world economy remained at odds with the need for a radical redistribution of power within and between states.

This year’s uptick in the global economy and the threat from rising anti-establishment sentiment provided the Fund with the impetus to elevate inequality to the firmament of core IMF work. With this so-called ‘IMF Spring’ underway, civil society was ready to rain on the Fund’s parade. During October’s annual meetings it was armed to the teeth with evidence that the Fund continues to undermine economic and gender equality, leaving civil society waiting for the IMF Spring to blossom.

The Fund’s optimistic narrative of the gains of globalisation was challenged by warnings of a looming global debt crisis. While the Fund reviewed and improved its Debt Sustainability Framework, it estimated that the new Framework would nonetheless still have missed one-in-five past debt crises.

Further contradicting the Fund’s focus on inequality, civil society continued to highlight the detrimental impacts of IMF conditionality around the world, such as its role in significantly weakening labour rights in Greece, cutting bread subsidies in Egypt, and decreasing health sector expenditures in poor countries. The fact that the managing director of the world’s most influential public fund was found “negligent in dealing with public funds” by a French special tribunal did not slow her down, with the IMF executive board reaffirming “its full confidence in the managing director’s ability to continue to effectively carry out her duties” on the same day the verdict came in.

The Fund’s Independent Evaluation Office made its own waves, with its critical report on social protection prompting three open letters from a CSO coalition, prominent economists and UN experts calling on the IMF to reform its approach to the issue.

The Bank sought to address the ‘infrastructure finance gap’ through crowding-in the private sector. Thus, the birth of the Cascade, later renamed Maximising Finance for Development, designed to attract private capital via so-called de-risking investments and transform development finance among MDBs from “billions to trillions”. Further reflecting a trend of co-financed mega-infrastructure projects is this year’s deepened cooperation of the Bank and Asian Infrastructure Investment Bank (AIIB).

A proposed capital increase for the International Bank of Reconstruction and Development (IBRD, the Bank’s non-concessional lending arm) ran into a snag on the eve of October’s annual meetings, as the US administration questioned the Bank’s current spending, while applauding the launch of the Women Entrepreneurs Finance Initiative (We-Fi), developed in collaboration with Ivanka Trump. The International Development Association’s (IDA, the Bank’s low income country arm) 18th replenishment included a private sector window.

The Bank’s 2018 World Development Report on education highlighted a persistent ‘learning crisis’ – albeit with little explanation of where funding would come from to resolve this and ignoring that its own policies helped to create this existing funding gap. 15 months after the new Environmental and Social Framework (ESF), which relies on ‘borrower systems’, was approved, the Bank released draft Guidance Notes for Borrowers. While they will be vital to implementation, CSOs found them lacking detail.

On a more positive note, the Bank closed the year announcing at that it will end ‘upstream’ finance for new oil and gas projects from 2019, as well as that it will begin reporting carbon emissions across its investment portfolio in 2018. These are important first steps towards the Bank making its investments coherent with a low carbon future.