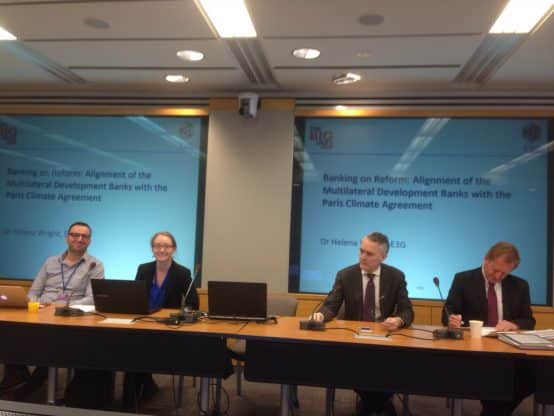 Notes from the 18 April Civil Society Policy Forum session on aligning multilateral development banks with the Paris Agreement at the World Bank and IMF's Spring Meetings.

Multilateral Development Banks (MDBs) have a vital role in supporting member countries to meet the agreed goals under the Paris Agreement on climate change. How can they align their activities and shift investment from fossil fuels to clean energy? This event will present the latest research and case studies. This event was co-sponsored by E3G, Bank Information Center Europe, Christian Aid and Urgewald.

Jason Allford, Australian ED to World Bank: Climate change is a political issue. There are tensions within the World Bank’s Board on this issue, and the differences in position are evident in my constituency, where I represent Australia, which has been slow in implementing the Paris Agreement, along with ten of the Pacific Island Countries, who are at the front lines of climate change impacts including sea level rise.

Helena Wright, E3G: A new report which will be published in May, entitled ‘Banking on Reform: Alignment of the Multilateral Development Banks and the Paris Climate Agreement’,  ranks MDBs across a number of areas, in terms of how they are aligning themselves with the Paris Agreement.

Here are some of the preliminary findings:

Nezir Sinani, Bank Information Center Europe: As John Roome will likely talk about in a bit, the World Bank is doing a lot of good things on climate change. But in this presentation, I am going to look at how fossil fuels are being financed by the World Bank indirectly, and discuss the ways that this is occurring.

Financial intermediaries (FIs): Case study – the Philippines. There is currently a case under investigation by the IFC’s Compliance Advisor Ombudsman (CAO), stemming from a complaint filed in October. The CAO has accepted the case of 11 communities who say they are negatively affected by new coal power plants. IFC provided equity investment to commercial banks in the Philippines, who then provided finance for these coal plants. This is the first complaint to the CAO that specifically cites climate change as one of the reasons for the complaint.

The IFC have reduced high risk FI lending cases from 18 to 5. But there are too many remaining fault lines where we haven’t been able to find common ground:

We want IFC to lead in its FI investments, not follow from the background. IFC must insist that borrowers disclose projects publically, so that affected communities can raise concerns while the project is in the proposal phase. Currently, in order for CSOs to get access to this information, we have to subscribe to databases like Bloomberg’s investments database, which costs $30,000 a year.

Development Policy Loans (DPLs): the Bank requires ‘prior actions’ (regulatory changes) before countries can take out these loans, which provide them with general budget support. In our research on four DPLs in Mozambique, Indonesia, Peru and Egypt, policy reforms that encouraged public-private partnerships directly benefitted the fossil fuels industry after these laws came into place. These are effectively fossil fuels subsidies, and we want the Bank to look at who benefits from these types of regulatory changes.

John Roome, Senior Director, Climate Change, WBG: Addressing climate change is fundamental to the WBG’s twin goals of achieving shared prosperity and ending extreme poverty: it will hit poor the hardest. The recently published Groundswell report by the World Bank suggested that 140 million people in developing countries could be forced to undertake internal migration by 2050, without significant interventions.

We’re making progress on climate action. The Bank is on track to meet climate-related finance targets under the 2016-2020 Climate Change Action Plan, which calls for 28 per cent of our investments to be climate-related by 2020. We’ll be announcing updated climate targets at COP24 in Poland later this year, where we will give a transparent update on progress. We’re working with a number of countries on their NDCs (Nationally Determined Contributions to the Paris Agreement), although we’re not currently publishing what we’re doing. We’re also part of multilateral discussions on a partnership strategy for 2050 planning – which considers what the world will look like in 2050, including low-carbon but also climate resilient infrastructure.

In the case of DPLs, we believe that these are actually key to driving climate action. More ‘prior actions’ can be used to drive green growth, and more and more DPLs actually include these types of prior actions.

On leveraging finance, we’re very active in the green bonds market development, and in working with developing countries to launch these bonds.

On alignment with the Paris Agreement, we’re integrating internal carbon pricing into project proposal analysis across the WBG. We’re also working with UNFCCC to validate our greenhouse has (GHG) accounting methodology, which we’ll make public later this year. For the new ESF [the bank’s new Environment and Social Framework safeguards] there is also a requirement to do project-level GHG accounting.

On financial intermediaries (FIs): the WBG does not directly finance any coal power plants since the ESKOM deal [a loan to South Africa in 2010], and made a pledge in December, to phase out finance of ‘upstream’ oil and gas after 2019. We’re also trying to create the market for renewable energy. Neither IFC nor the Bank allows direct financing for coal. Nezir was referring to general financing for FIs, which is not tracked. Having said all that, building strong financial institutions in developing countries is absolutely key, so we have to balance finance for FIs with policies to prevent coal explosure.

On the issue of green-to-brown finance ratios – we need to come together with CSOs on a common basis for this data, as your numbers and ours are quite different.

Adaptation is way more complicated to invest in than mitigation, which is most of our climate finance. Sustainable infrastructure is key; there is a need to work upstream with governments to ensure these projects enter the pipeline. We also need to include factoring in climate risk with adaptation.

On internal carbon pricing: we don’t have an approach, and we’re asking other MDBs and investigating different approaches. But honestly we’re not quite ready; we’re trying to build mainstreaming from the ground up.

Jon Sward, Bretton Woods Project: How are the Bank and IADB currently working with countries on understanding the risks of stranded assets, with respect to planning for a low-carbon transition on the 2050 time horizon.

Christian Donaldson, Oxfam: On FIs, will IFC publically disclose how clients are exposed to coal?

Representative from Young Diplomats of Canada: Is the upstream pledge a double standard in terms of the World Bank cutting off poor countries from a development path that developed countries have used, in terms of being able to access finance to develop their natural resources?

Mongolian CSO: The Bank is doing technical analysis of coal expansion in our country, which will be funded by China.

John Roome: On the upstream pledge, we understand the critique, but ultimately we don’t feel funding ‘upstream’ oil and gas, given the current climate challenges, is a good use of the Bank’s relatively scarce public funds. On Mongolia, I’d be very surprised if the Bank is heavily involved in this. On this issue of FIs disclosure, this is a live discussion but one that goes much broader than merely climate issues, and touches on financial inclusion. So it requires a discussion across different parts of the Bank in order to move forward. We’ve begun analytical work towards planning for 2050. On low-carbon infrastructure and stranded assets: within sectors there is ongoing dialogue with those countries who are dependent on intensive extractive industries about ways to get them on a different pathway.

Juan Pablo Bonilla: Stranded assets and sustainable infrastructure involves a difficult discussion. But it’s very important, especially for long-term planning. The lead of our climate division has been very active in creating awareness, and I think there is very limited knowledge within Central Banks about this issue and so we are working to communicate this.

Jason Allford: On the upstream pledge, developing countries are asking us for helping in adapting to climate change. They want our help with their NDCs, and renewables are now much more competitive, so for the island nations I represent this is much more sustainable than being dependent on importing oil and gas.