Funding Clean Energy Access for the Poor: Can the World Bank Meet the Challenge?

Funding energy access for the poor: Can the Bank meet the Challenge? 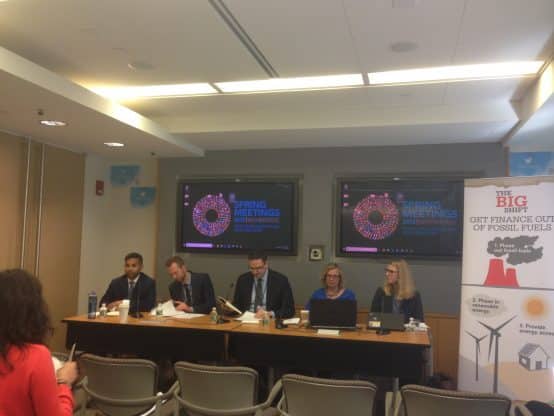 Notes from the 18 April Civil Society Policy Forum session on the World Bank's approach to financing energy access at the Work Bank and IMF's Spring Meetings.

Session overview: This session will look at how the WBG approach is helping countries improve their performance to achieve universal energy access by 2030. We will discuss challenges and opportunities in regard to tracking and reporting, and to give priority to clean energy and energy access demands from countries in WBG’s operations and lending.

Alex Doukas, Oil Change International: A recent Tearfund & Overseas Development Institute report, Pioneering Power, has some key findings that I’ll be presenting, as we had to combine two energy access panels into one:

Forthcoming Oil Change International report: finance for distributed renewable energy (DRE) access was only 1.9 per cent for WBG between FY14-FY16, on average. This needs to get closer to the IEA’s least cost analysis, under its Energy for All scenario, which calls for 70 per cent new connections between now and 2030 to come from DRE in order to achieve SDG 7. Emerging examples of good practice include WBG’s significant engaging in significant outlay of mini-grids in Nigeria.

Anna Östergren, Swedish Society for Nature Conservation: WBG has committed to helping achieve SDG 7; its own global tracking framework reveals we are not on track to achieve it.

There is a need to make sense of different figures cited in WBG reporting on the number of new connections that it is financing: a 2016 IEG report, the WBG website, and the WBG corporate scorecard all provide different levels of connections being achieved. The data sources are not cited so there is no way to verify them.

Mozambique example: the Country Partnership Framework (CPF) does not identify the shortcomings in the RISE scorecard, which scores Mozambique poorly in terms of its regulatory environment for DRE. There is also a mismatch between the CPF’s focus on increasing renewable energy, and subsequently funded energy projects by the Bank, as 7-of-8 of these went to funding energy export projects.

Bangladesh example: government has committed to achieving universal access by 2021 and set a target for renewable energy. In the past the WBG supported large-scale DRE investment programme, which reached 12% of the population. Despite the government’s commitments to renewable energy and its energy access aims, current WBG projects appear inconsistent and could lead to an implementation gap.

Dana Rysankova, World Bank: There has been progress on energy access; while globally we are behind, there is a big difference between different countries. For example, regionally in East Africa, Kenya is leading, and other East African countries are following – with more success than in other Sub-Saharan African sub-regions. What have these countries done differently? They have prioritised it, and included an emphasis on off-grid and mini-grid energy sources in their energy strategies.

The IEA least cost scenario for achieving SDG 7 is one of a number of estimates, based on geospatial analysis. This ignores the political reality of countries and makes assumptions about what level of connections are possible. What are the services needed, and at what level? What we are increasingly doing is looking at the country level, and looking at what is feasible. According to the multi-tier framework, if you want 24-hour access, the conventional grid is the cheapest way of achieving it, as DRE doesn’t easily provide this.

In some countries there is a lag in absorptive capacity: results needs to be the focus, not only on finance. We need to have the right regulations to ensure access on ground. Kenya and Ethiopia are two examples where we’re working on parallel off-grid and mini-grid solutions.

David Kinder, alternate UK ED to the WBG: The UK prioritises climate action. Domestically, we had 40 per cent coal as part of our energy mix five years, and have 2 per cent now. DFID is taking an increasingly strong focus on energy access abroad.

On the Bank’s General Capital Increase: if it does happen, the WBG will be able to lend more, and you’ll see additional climate change commitments, in terms of being able to lend more for access, and fill some of the finance gaps that people have been talking about here. The private sector is also emerging very quickly in this area, and they can help us to make the progress needed to achieve SDG 7.

An increase in the Bank’s support for energy access over time is one of our key priorities. Targets are important, although sometimes they can distort efforts to get results on the ground right, and we have to ensure that this is not the case. Methodology of reporting is an important thing to address.

Sasanka Thilakasiri, Oxfam: I’ll throw it open to the panel – are any issues from the presentations you want to come back on?

Alex Doukas: Just a quick note that we delayed our planned report to incorporate more recent information from the Bank, as we believed it was important to show the changes to the Bank’s funding in this area. We can argue about the exact targets, but we do want to see the Bank having a significant focus on increasing connections as part of it energy sector investments.

Dana Rysankova: There’s never a silver bullet. Government commitment is essential. But we agree that more connections are needed and we are working on this.

Anna Östergren: We want to see more connections, and emphasis on results.

David Kinder: We think regulatory changes required for countries to be eligible for the Bank’s Development Policy Loans can be an effective way to improve the regulatory framework needed to promote energy access.

Benson Ireri, Christian Aid: Energy access is becoming a priority for so many countries. DRE is needed to achieve SDG7, and we’re seeing a lot of demand for it, in Kenya and other African countries, but the policy environment is key.

Athena Ballesteros, Growald Family Fund: In the Philippines, we used to have an access issue, then there was the emergence of creative social enterprises that helped to create access. What are you doing to ensure the best practices in one country are transferred to others where they are needed?

Dana Rysankova: In terms of the CPF, it’s a multi-stakeholder process, so not all the priority is on funding renewables or access. But when there’s real commitment by the government on access, then significant progress has been made. We’re also trying to transfer knowledge between different countries.

David Kinder: One of our priorities is having a strong emphasis on South-South learning. IFC also plays a role in terms of engaging the private sector and ensuring the innovation happening is transferred to new markets.

Alex Doukas: I think that ensuring there’s CSO engagement in country diagnostic and CPF processes is key, so that the Bank can account for demand for energy access that exists in many countries.

SustainUS delegate: What is role of energy efficiency in energy access?

Benson Ireri: What is the role of absorptive capacity in access, what has WBG been doing with respect to this?

Dana Rysankova: Utilities are the weak link – they are not financially viable in many Sub-Saharan African countries. So this is a barrier to creating new extensions, because their model is not profitable, and if they get bigger they’ll just be losing more money. For mini-grid and off-grid this is slightly different, as you need to create a regulatory framework. You can set up funds for mini-grid and off-grid and engage social entrepreneurs. But in this space in Sub-Saharan Africa, most of the finance goes to just five companies, so we need to do more outreach to local companies and try to grow this space so that the market becomes more diverse.

Funding Clean Energy Access for the Poor: Can the World Bank Meet the Challenge?

Funding energy access for the poor: Can the Bank meet the Challenge?