Immunity and accountability: What you won’t hear about at the Bank’s Spring Meetings next week 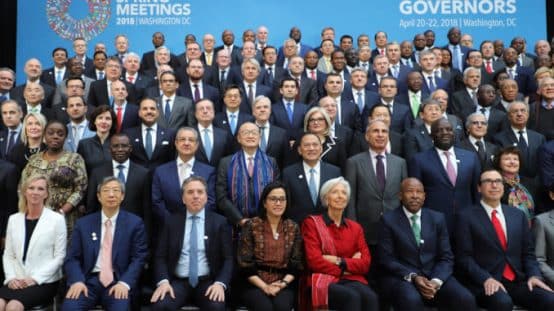 The IMF MD flanked by the Chair of the Development Committee and the Chairman of the IMFC at the 2018 Spring Meetings of the IMF/World Bank held in Washington DC, USA. Photo by Abayomi Adeshida 21/04/2018

Given that the proposed International Bank for Reconstruction and Development (IBRD, the World Bank’s medium-income lending arm) and International Finance Corporation (IFC, the World Bank’s private sector arm) general capital increase (GCI) was clearly the spring meeting’s key focus for shareholders and Bank officials, it came as no surprise that the Development Committee’s communiqué, published 21 April, was principally focused on the GCI agreement. After the pessimism of last year’s annual meetings in which the US seemed a barrier to shareholder agreement, the communiqué outlined that its members have endorsed “a US$13 billion paid-in capital increase, consisting of US$7.5 billion for IBRD and US$5.5 billion for IFC, via general and selective capital increases” as well as a $52.6 callable capital increase for the IBRD. The World Bank press release noted that the endorsement, which is expected to be formalised at the annual meetings in Bali in October, will bring annual Bank lending capacity to $100 billion between fiscal year 2019-2030. This contrasts with approximately $59 billion in lending in 2017.

As expected, the communiqué reflected the widely publicised US push for a move away from Bank lending to ‘credit worthy’ countries (read China) by stressing the targeting of its support to “areas of the world that most need funding”. That said, it also noted, again in a barely veiled reference to China, the “importance of staying engaged with all clients.” The Development Committee deliberations were made on the basis of two important documents, the revised 2018 Forward Look and the Shareholding Review. The Communiqué highlighted the shareholders’ strong support for the Forward Look’s four key priorities: (i) stay engaged with all clients; (ii) lead on the Global Public Goods agenda; (iii) mobilize capital and create markets; and (iv) continually improve effectiveness and the internal operational model.

The Committee also endorsed the Shareholding Review’s recommendation and noted that “the Selective Capital Increase for IBRD will result in rebalanced shareholding and reduce extreme under-representation.” Under the new structure, China’s shareholding in the IBRD will rise from 4.68 per cent to 6.01 per cent, while the US share will decrease slightly to 16.77 percent from 16.89 per cent. Despite the change, the US will retain its veto power over IBRD and IFC decisions.

The document also reflected one of the central themes of the meetings, the Bank’s focus on fragile and conflict-affected states and supported the Bank’s efforts to “increase its field presence in these areas”, which it considered to pose the “most urgent development challenges.”

In line with concerns raised by the IMF’s Fiscal Monitor and World Economic Outlook about mounting public and private debt and what the Fund’s Chief Economist termed “sobering” medium-term prospects, the communiqué emphasised the “persistent global headwinds and [challenges posed by] structural changes to the global economy.”  To address these challenges, the Committee endorsed the Bank’s much-criticised focus on the Maximising Finance for Development approach (see Observer Summer 2017) and President Jim Yong Kim’s human capital project. While civil society naturally supports a focus on ‘investing in people’, many within it are sceptical of the approach, as they fear it may be used by the Bank to push for the privatisation of essential social services, such as health and education (see Observer Spring 2018) and to undermine public sector unions.

The document also reflected one of the central themes of the meetings, the Bank’s focus on fragile and conflict-affected states and supported the Bank’s efforts to “increase its field presence in these areas”, which it considered to pose the “most urgent development challenges.” The communiqué also encouraged Bank management to intensify its work on “gender equality, climate, regional integration, and pandemics.” In that regard it acknowledged the Progress Report on Mainstreaming Disaster Risk Management in WBG operations and “welcomed the Update to Governors on Gender Diversity in the WBG Executive Boards.”

Highlighting concerns about the “marked increase in public debt levels in low-income countries in recent years”, which the IMF noted now exceeds pre-financial crisis levels with the proportion of Sub-Saharan countries in risk of debt distress doubling to 40 per cent in the last five years, the communiqué called on “the WBG and IMF to work together on a multi-pronged approach to reduce public debt vulnerabilities” and welcomed “the upcoming roll-out of an upgraded Debt Sustainability Framework for low-income countries by the two institutions.”

As noted throughout the meetings by members of civil society, there is concern that, in the absence of significant structural changes within the Bank, including better alignment of staff incentives with the delivery of human rights-based development outcomes, the GCI and the push for the Bank to increase its work in the most challenging environments may actually further distance the Bank from effectively delivering on its development mandate.

Immunity and accountability: What you won’t hear about at the Bank’s Spring Meetings next week