Regulating capital fows in emerging markets: the IMF and the global financial crisis

The IMF can’t deal with a financial crisis: Reserve Bank of India governor 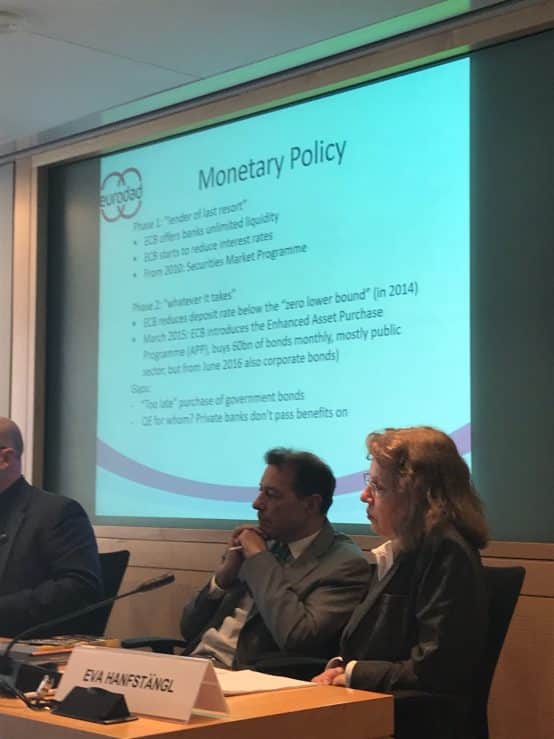 Eva Hanfstangl at Civil Society Policy Forum session on the response to the 2008 financial crisis at the World Bank and IMF's Spring Meetings.

Notes from the 19 April Civil Society Policy Forum session on the response to the 2008 financial crisis at the World Bank and IMF's Spring Meetings.

Sponsors of the event:

15 September marks the tenth anniversary of the Lehman Brothers. The implosion of Lehman was the first major mile stone of the North Atlantic crises, which also spilled over to the Global South. Hundreds of millions of citizens were ultimately impacted.

10 years on, we are planting the seeds for the next crisis.Manuel Montes, South Centre

Since 2008, IFIs, governments, the G20 and central banks embarked on a reform agenda that was meant to fix the old crises and prevent the next. Measures range from bank bail-outs to quantitative easing to partial financial sector reform. While the impact of the financial crisis is still being felt, there are already signs of the next. At the same time, the pace of financialisation of the global economy keeps increasing, under the added pressure of major promotions of large-scale infrastructure projects and related public-private partnerships.

Where are we in the reform process?  What business remains unfinished? Were the correct measures taken? Did governments just inflate new bubbles? What suggestions do academics and CSOs have for policy and decision makers?

This is about putting the public interest first in the future. In 2008, it was expected that lessons would be learned, but instead financial services are dangerously unstable and a political backlash is underway. The risk for another financial crisis is real, and we could be forced to bail-out banks once again.

10 years on, we are planting the seeds for the next crisis. 2007 is when the crisis started, and developing countries became the destination for quantitative easing (QE) but it did not actually increase investment in these countries. QE is rendered good for commodity prices, but bad for development.

Now we are seeing an increased debt pile to GDP, and the IMF is concerned about the leveraging process. Chosen strategies of QE increase the scale of capital flows to developing countries – especially the short-term portfolio in capital flows – capital accounts were kept open.

Financial vulnerabilities exist. The share of portfolio equity in external liabilities has been increasing. An important part of the increase in equity liabilities is due to capital gains by foreign holders. In many EDEs, foreign presence in equity markets is greater than in the US and Japan.

While still remaining below the levels seen a decade ago as a percent of GDP, external debt build-up has accelerated since the 2008 financial crisis. This is mainly due to borrowing in the financial sector which does not account for a higher proportion of external debt than the public sector in both international bank loans and security issues.

A large proportion of private debt is in foreign currency. There is also a renewed tendency for dollarisation in domestic loan markets.

Bond issues have been growing faster than borrowing from international banks, both in the public and private sector, particularly since the crisis.

International banks have been shifting from cross-border lending to local lending by establishing commercial presence in EDEs.

Public debt as a percentage of GDP now stands below the highs seen in the aftermath of the crisis, but in many countries it has started to rise since the crisis. The participation of non-residents in the bond markets has been growing, and much of sovereign debt is now in local currency and under local jurisdiction.

2008 was a transatlantic crisis, broadly characterised by the following:

Impact of the crisis:

Phase 1: ‘lender of the last resort’

Phase 2: ‘whatever it takes’

Since February 2017 in the USA, there has been an attempt to repeal financial regulation measures put in place following the financial crisis.

The proposed repeal of section 1504 of the Dodd-Frank Act – also known as Cardin-Lugar anti corruption law – poses a significant threat. This is the portion of the legislation that called for greater transparency, recording payment processes, which acted as an anti-bribery law and covered areas such as illicit financial laws, tax evasion, and corruption. 1504 was under sustained attack and repealed in the House of Representatives.

This was significant as it had been used as a model for regulation and legislative measures post crisis, and a consensus was brought about on this.

A model law could offer a different approach and a legislative remedy to deal with 51 per cent of where the world’s debt stock is marketed. The US and UK have between an 85 and 90 per cent share of the debt market, and Germany, Singapore and Japan also charting high.

There is a possibility to change New York law as a model law, to say that if ¾ of investors agrees to a structuring, we have to move things forward for debt to be arbitrated, which could offer a viable and clear path forward.

‘Those who do not understand history are bound to repeat it’ – This is why Unfinished Business was written.

I characterise the financial crisis as the North-Atlantic crisis as it is ‘parasitically intertwined’.

Assets were sold to an unregulated shadow banking system, which shows why you should not have large parts of your banking system under shadow banking and without regulation. In America, banks broadly bought under regulation. In Europe, they used their internal risk models to calculate their own capital, so the banks bid down their own capital ratios.

Are the problems solved? Europeans accepted a simple leverage ratio. I think we are half-way there in Europe, and most of the way there in the US.

Regulating capital fows in emerging markets: the IMF and the global financial crisis

The IMF can’t deal with a financial crisis: Reserve Bank of India governor