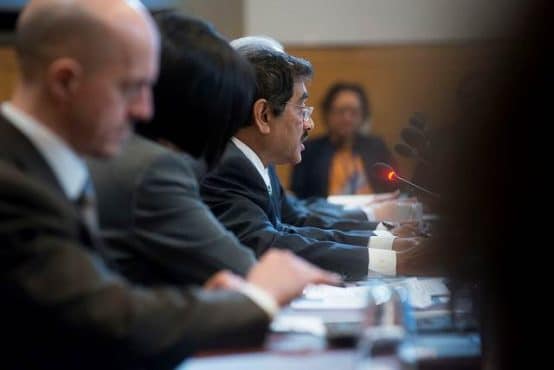 The G24 is a grouping of some of the most influential developing countries in the World Bank and IMF. It includes G20 countries such as India, Argentina, Brazil, Mexico, and South Africa, and also Egypt, Iran, Nigeria, Venezuela, as well as a number of other countries. The G24 communiqué is traditionally the first statement of the meetings.

Despite welcoming the global economy’s continued recovery, the communiqué of the Intergovernmental Group of Twenty-Four on International Monetary Affairs and Development (G24), released on 19 April at the World Bank and IMF Spring Meetings in Washington DC, highlighted a number of risks for emerging market and developing economies (EDMEs): “heightened downside risks arise from a potential sharp tightening of financial conditions, further rise in protectionism, and geopolitical tensions. Against this background, sustaining inclusive growth while enhancing our economies’ resilience is our key priority.”

The path to such growth seems more elusive than ever. Against the background of increased IMF warnings about debt concerns in Sub-Saharan Africa issued during the meetings, which warned that 40 per cent of the region’s countries are now in debt distress, the G24 noted the need for EDMEs to engage in prudent fiscal planning: “Using debt responsibly to finance growth-enhancing investments, ensuring fiscal sustainability through domestic resource mobilization, and developing financing mechanisms to improve resilience in debt structures, will reduce debt vulnerability and increase fiscal space to finance priority infrastructure and social spending”.

The G24 highlighted the need for enhanced domestic resource mobilisation as a means to financing such responsible spending: “We urge the IMF and the WBG to continue to strengthen their assistance to improve domestic resource mobilization. We stress the importance of international tax cooperation to develop fair rules, avert harmful tax practices and competition, and enhance tax transparency.” Yet, unlike in its previous two communiqués, the G24 this time omitted mention of a UN Tax body, as called for by the Group of 77 developing nations (G77) in 2017, and doubts remain about the Bank and Fund’s commitment to global tax cooperation that incorporates Southern voices in a meaningful way. This was evident at the Global Platform on Tax Cooperation’s first conference in February, when states were not involved in drafting the conference’s closing statement on the platform’s direction of travel (see Observer Spring 2018).

The G24 also seems to have embraced the World Bank’s Maximising Finance for Development (MFD) agenda, despite strong civil society concerns about the Bank’s promotion of public-private partnerships as part of that agenda.

The G24 also seems to have embraced the World Bank’s Maximising Finance for Development (MFD) agenda, despite strong civil society concerns about the Bank’s promotion of public-private partnerships as part of that agenda. On finance for the Sustainable Development Goals (SDGs), the communiqué notes, “Multilateral development banks (MDBs) play a key role in supporting countries to achieve the SDGs. We encourage them to work jointly and as a system in key areas, based on comparative strength, to maximize development impact. MDBs should do more to catalyze private financing, including by working toward helping make infrastructure an asset class.” Given that this could create off-the-books debt liabilities for EDMEs, it is by no means a risk-free approach to infrastructure finance, and can lock countries in to extractivist, commodity-dependent approaches to development.

The communiqué continued to call for completion of the ongoing IMF’s General Review of Quotas by next year’s Spring Meetings, noting that they were “concerned about the slow progress to date”. They called for further rebalancing of quotas to give EDMEs greater representation: “We reiterate our call for a revised quota formula that … further shifts quota shares from advanced economies to dynamic EMDEs. The realignment of quota shares must not come at the expense of other EMDEs and should protect the quota shares and voice of all countries eligible for the Poverty Reduction and Growth Trust (PRGT) and small developing states.” The communiqué also called for a third Sub-Saharan African chair being added to the G24, to expand the region’s representation within the group.

Beyond the quota review, the G24 called on the Bank to assist EDMEs in undertaking climate action under the Paris Climate Agreement, asking “the WBG and developed countries to support EMDEs’ climate actions and efforts to build resilience to climate-related disasters,” and welcoming “the WBG’s mainstreaming of disaster risk management in its country assistance strategies and investments in early warning systems.”

The G24 also urged, “continued support from IFIs [International Financial Institutions] and the international community to developing countries that are disproportionately affected by refugee crises”, welcomed “the IMF’s recent adoption of an enhanced Framework that strengthens its support to countries to address governance vulnerabilities including corruption,” and expressed support for the implementation of the WBG’s Gender Strategy (see Observer Winter 2016).

Finally, the G24 also expressed support for the mooted World Bank Group capital increase, which was endorsed by the WBG’s Development Committee on 21 April: “We look forward to a stronger WBG that, as a cooperative, works effectively and efficiently with all client countries.” Given challenges posed by larger trends related to trade, debt and tax, for both the Bank and Fund, doing this is anything but straightforward.