Solidarity needed with the anti-austerity movement in Sudan 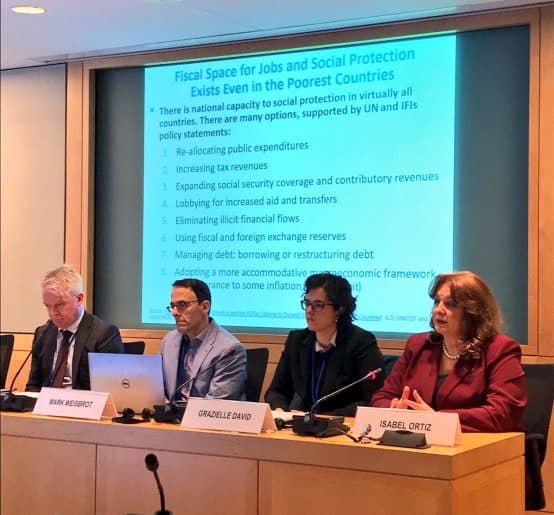 Isabel Ortiz from ILO presents during the CSPF panel on Assessing Austerity and Its Alternatives.

Notes from the 20 April Civil Society Policy Forum session on assessing austerity and its alternatives 10 years after the global financial crisis at the World Bank and IMF's Spring Meetings.

Austerity has been adopted in places throughout the world – particularly following the 2008 global financial crisis – and has often had devastating consequences on human rights. The event explored the following: A Lost Decade for Equality, Development and Human Rights? Assessing Austerity and its Alternatives 10 years after the global financial crisis. The event was sponsored by the Center for Economic and Social Rights, the Bretton Woods Project and the International Labor Organisation

Nicholas Lusiani, CESR: stressed the need to assess austerity to map out risks of forms of fiscal consolidation, and in doing so understand the consequences of such adjustments and match how human rights can be used to help address trade-offs and dilemmas that governments face in situations of crisis. He asked guiding questions to the panellists, such as the following:

Isabel Ortiz, ILO: From 2010-2020, after a short period of fiscal expansion, a push happened where countries cut expenditures rapidly, and that although we often hear about austerity in Europe, most of austerity programmes take place in developing countries.

How are countries  going to achieve the Sustainable Development Goals (SDGs) if their fiscal space is contracting to this degree? Often universal subsidies are removed but not replaced with anything, leaving countries cutting or capping wage bills, for example. This is an important trend because it has several impacts on right to education and social protection etc. Targeting strategies are used instead of universalism, but it is a de facto contraction of coverage.

Eight alternative strategies to austerity are:

Grazielle David, INESC: Austerity in Brazil will last 10 or maybe 20 years, which will freeze primary expenditures, mostly social expenditures and infrastructure. This has resulted in chronic underfinancing, creating a major reduction of public expenditure. Labour reforms, pensions reforms, privatisation, budget cuts on public policies run in contrast to the promotion of human rights rights and the SDGs.

Progressive tax reform has the potential to be one of the best strategies as an alternative to austerity. In Brazil, they face major increases to Value Added Tax (VAT). Simple progressive measures could have avoided austerity measures and invest in socially beneficial areas of social investments and income redistribution.

Mark Weisbrot, CESR: The IMF almost explicitly endorsed a fiscal rule of not increasing spending about inflation and not taking into account demographic or economic changes, and one of the examples of this is Brazil.

Austerity is a political agenda, which has been highlighted throughout Europe. The desire to do whatever it takes to preserve the Euro when its future was called into question was used for changes in policy.

The implications of policy decisions in Europe after the 2008 financial crisis were evident, with research demonstrating the following:

They did not seem to care whether you needed to increase labour supply, and there was very little correlation between labour market outcomes and the reforms.

The USA has a veto over charter changes and policies, so have a huge share of votes in the IMF: ‘This is something that would have to be changed if you are going to get better policies in developing countries’

Duration of recession was a policy choice because of the measures taken after it.

The IMF has changed its speech on issues. We have always welcomed policy change – flexible credit lines, for example. I agree there’s more flexibility, but I want to see a policy match to the rhetoric.

Gudmundur Arnason, Iceland: Our economic trajectory is such that we have grown out of the crisis in Iceland. Iceland was described as the perfect storm. We managed to get new banks going within a year, but still we are resting with legacy issues accruing from the structural collapse as the crisis led to a collapse in central government revenue and public expenditures.

When the crisis hit, Icelandic authorities put an emphasis on consultations with social partners. It was essential that unions, and social partners were part of this, and played a part in decisions around how expenditure strategies are carried forward.

Nordic countries have a tradition of an active dialogue between countries and authorities, and a consensual approach to social cohesion and to pursuing egalitarian economic policies.

The tax system was changed, and new taxes were created, including the introduction of a wealth tax and a steepening of progressive income tax structure and better targeting of social benefits. On expenditure, there was a broad agreement to preserve as much as possible.

Our cooperation with the IMF was exemplary and mutually beneficial, but some of the social ideas in Iceland were not part of the status quo agenda.

Every stone was turned to try and protect the most vulnerable, through taxation, through social benefits. Was this a lost decade for Iceland? No it was not.

Iceland was not an economic crisis. It was a financial crisis. Three years ago, we reached pre-crisis levels of economic volumes and have had sustained economic growth. We don’t want to find ourselves in this position again.

Jeffrey Franks, IMF: The single best policy there is, is sustained economic growth, or there will be impact on poverty alleviation.

We have taken policies around equality, gender and social protection to the core of our agenda. They are macro critical – critical to the performance of a country. The focus you see on these issues today were not evolved years ago, and we are not done evolving this framework. Our adjustment policies are taking in to account the need to be flexible to changing circumstances and go back to the IMF board and change the thinking around this.

Solidarity needed with the anti-austerity movement in Sudan