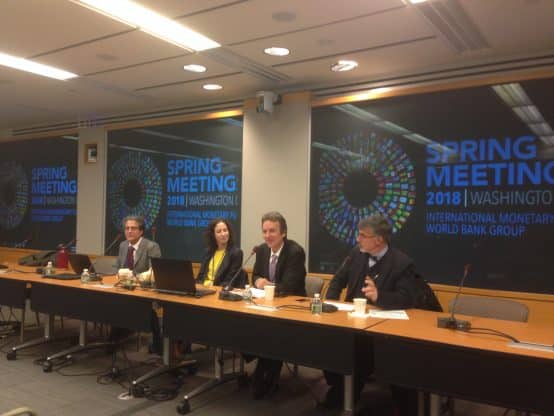 Panellists at the CSPF session on 'The Promotion of Public-Private Partnerships - Exporting a Failed Model?'.

Notes from the 19 April Civil Society Policy Forum session on the World Bank's promotion of public-private partnerships at the World Bank and IMF's Spring Meetings.

Session overview: Public-private partnerships (PPPs) continue to gain prominence as key to the achievement of the Sustainable Development Goals andthe financing of ‘essential’ infrastructure. The disastrous experiences with PPPs in the Global North, however, raise concerns that the World Bank’s shareholders are exporting a failed model.

Luiz Vieira, Bretton Woods Project: I’ll be looking at the experience of PPPs in the European context. Some actors, including the WBG, have argued that PPPs are needed to achieve the SDGs. However, many of the developed countries that are championing PPPs abroad are changing their own approach to PPPs. Many of these developed countries also support illicit financial flows through failing to crack down on tax havens, or even hosting them in their overseas territories, which is ironic given the need for tax reform to fund the SDGs.

It is sad that a lot of cases [of PPPs] have not worked outRui Monteiro, WBG PPPs Unit

A number of independent bodies have recently raised concerns about PPPs. According to the UN, PPPs can raise user fees, and tend to exacerbate inequality. The EU Court of Auditors recently released a report arguing that EU co-financed PPPs cannot be seen as a viable way of funding infrastructure, including because of unbalanced risk sharing. The UK’s National Audit Office (NAO) found that existing PPPs would result in £190 billion in costs to the state by 2050, even if no further PPPs are signed.

The evidence at the very, very least is quite mixed, and possibly very damning. A group of 90 CSOs are calling for a moratorium on the WBG’s promotion of PPPs, until an independent analysis can be done. The IMF has recently sounded the alarm on rising public and private debt. What is the relationship between this and PPPs, as they can create off-the-books liabilities for states?

Katie Malouf Bous, Oxfam International: What are PPPs in Education? Private funding of public schools is the type of PPP that has raised the most concern from CSOs.

The 2018 World Development Report & the ‘learning crisis’: this has been a real concern in the education community, and coincides with financing challenges more broadly. Linked to discussion around accountability; in theory this has been used to justify the entrance of private actors into developing countries’ education systems, with the belief that market-based competition would lead to better overall results.

This has both similarities and differences in terms of comparisons to other types of PPPs. The former include public funding for private delivery; transparency and democracy debates; and concerns about fiscal impacts. In Liberia, private education provider Bridge International Academies, funded by the IFC, was spending 13 timed per student what state-run schools were. Regulation in this space is a challenge.

Does this make sense? CSO concerns include: weak/contested evidence base, equity, and the tension between public and private providers.

Rui Monteiro, WBG PPPs Unit: As an economist I am looking at the incentives that we are putting into contracts.

In Portugal, before I joined the WBG, when we were looking at a PPP for a hospital in this case, the evidence was only two previous cases, both where the PPPs had failed. We were concerned, but we had an idea that we could change the contract in order to better manage risk. There are two concerns: we need to contain the costs, and also try to get the best services for costs.

In Portugal, two experiences of hospitals I was previously involved in were recently audited after 10 years, and the contracts were renewed. This is not the case for all PPPs. It is sad that a lot of cases have not worked out; we need to learn more from the ones that have failed, and we were hoping that CSOs would help us with this.

Two cross-cutting lessons from recent European reviews (the EU Court of Auditors and NAO reports) are: Biased initial assessments were conducted for those projects, and perverse incentives affecting the procurement agencies (including accounting issues) were found. These are issues that need to be tackled to create better PPPs practices.

One of the issues where there have been PPP failures is allowing the private sector to influence policy, or designing contracts that prevent policy changes. But there are ways to design PPPs that match the needs of government. The best PPPs contracts are not complex contracts, for sure. After the London tube attacks, they had to have army of lawyers look at 50,000 pages of contracts to decide which private and public actors were obligated to repair the damage. We need to have contracts that are simple enough for the people responsible for them to understand.

The ability to design simpler contracts is critical; and the ability to select which types of projects should be done through PPPs by pre-project screening is also very important.

US CSO: The Bank has been promoting Infrastructure as an asset class – is this a risky investment?

US CSO: What would it take for Oxfam and other CSOs to be comfortable with private education providers operating in developing countries?

Katie Malouf Bous:  With respect to private education operators, really interesting work is being done by a network of CSO organisations, within the framework of the right to education. Part of that is about education being free and equitable, with access for all.

CSO question: With wider trends towards financialisation, should Bank be doing more to ensure states get fiscal benefit from PPPs?

Katie Malouf Bous: from CSO point of view, we don’t know the split between public and private education funding, because it’s hard to track the latter.

Rui Monteiro: Screening of projects is vital; what is success? It has many different faces, including that it can survive. What we must avoid is ‘BNR’ – built, neglect and rebuild!