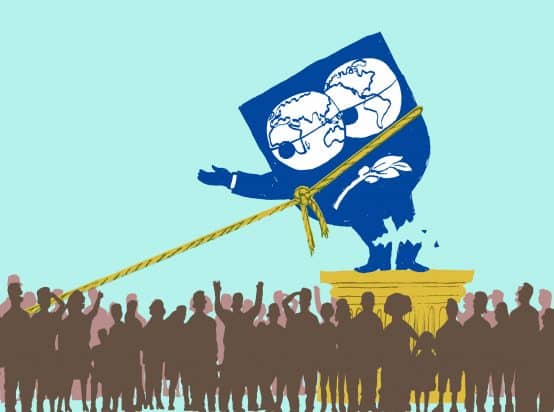 In June, King Abdullah II of Jordan accepted the resignation of Prime Minister Hani al-Mulki, amid the biggest protests in Jordan since the 2011 Arab Spring, after spending two years pushing through a series of unpopular government initiatives and IMF-mandated reforms.

Widespread protests broke out throughout Jordan in February in response to the rising cost of living and government initiated tax rises on basic goods such as bread, alongside a series of controversial decisions made by the government, in part to meet the budget deficit target in line with Jordan’s IMF agreement, which began in 2016.

Unrest erupted again in June over austerity measures, income tax reforms and price hikes, which were the latest in a long line of controversial reforms adopted by the government since the IMF loan programme began.

The fund has consistently underestimated the importance of calibrating their recommendations to the specific political context, not taking into account the extent to which recommendations are politically viable and socially sustainable.Philip Alston, UN Special Rapporteur on extreme poverty and human rights

Amid the chaos, Prime Minister Mulki met with trade unions, who demanded that the highly controversial income tax law be scrapped. Ali Obus of Jordan’s Federation of Unions was quoted in the Guardian asking the state to “maintain its independence and not bow to IMF demands.” However, no agreement was reached. Two days later, Mulki offered his resignation.

The Jordanian IMF loan – what was on the table?

In August 2016, the IMF approved a three-year loan arrangement with Jordan of $723 million under the Extended Fund Facility (EFF), which is a comparatively long type of IMF loan programme designed to address deep structural concerns. The accompanying press release highlighted key challenges for the Jordanian economy, such as the impact of the Syrian refugee crisis and high unemployment.

In the first review under the EFF in June 2017, the IMF was “encouraged by Jordan’s commitment to continue removing exemptions on the general sales, income tax, and custom duties.” Mitsuhiro Furusawa, IMF Deputy Managing Director, further signalled Fund support for the government reforms, stating, “The authorities are committed to continue with a gradual and steady fiscal consolidation to bring public debt toward more sustainable levels. To help public finances rest on a sounder foundation, the removal of exemptions on the general sales tax and custom duties will continue over the program period.” In the following 2017 surveillance review, IMF staff also assessed that the disputed “income tax threshold for individuals and families” would help to “balance efficiency and distributional objectives.”

A June 2017 statement accompanying the latest Jordanian surveillance review by Hazem Beblawi, IMF Executive Director for Jordan and Sami Geadah, its Alternate Executive Director, seemingly aware of evidence on the potentially harmful impacts of such tax reforms on the most vulnerable, noted, “Most of the remaining exemptions were difficult to remove because of their importance for low income households. Nevertheless, further removal of exemptions is planned for 2018, together with better targeting of support to the most vulnerable.” However, targeted social protection programmes have come under mounting scrutiny, as recent research has demonstrated vast exclusion rates – particularly for people who are the most vulnerable – as well as weakened social cohesion (see Observer Spring 2018). Likewise, a recent report by Philip Alston, UN Special Rapporteur on human rights and extreme poverty, on the IMF and social protection critiqued the IMF’s position and recommended a human rights-based approach founded on the principle of universalism in line with internationally agreed definitions (see Observer Summer 2018).

The review also noted a “critical need to advance reforms to lower the formal cost of labor”, potentially implying the need for further labour flexibilisation policies widely considered to undermine labour rights, at a time when the relationship between the government and trade unions is already tense. An attached government memorandum in the surveillance review also stated, “in cooperation with the World Bank, we have implemented a number of pilot projects to explore the potential benefits of active labor-market measures”, triggering further concern in particular in light of the Bank’s draft 2019 World Development Report, which endorsed decreased minimum wages, zero-hour contracts and almost ignored fundamental workers’ rights like collective bargaining (see Observer Summer 2018).

On IMF conditionality in Jordan, Gino Brunswijck with Brussel-based civil society network Eurodad said, “Since 2012 repeated IMF-programmes have not managed to bring Jordanian debt down, however, they did lock the country’s citizens into a perpetual cycle of austerity with ever more drastic measures and major implications for political stability.”

When asked about the Jordanian reforms squeezing the middle classes, IMF Director of Communications Gerry Rice noted in a March 2017 press briefing, “in order to end the rapid increase in public debt, the program emphasized the need to broaden the tax base as part of the revenue reform, while alleviating the impact on the most vulnerable.” He continued, “The IMF has not made any specific recommendations on which products should be subject to higher taxes. The IMF has also emphasized not raising the prices of goods that are consumed by the poor.”

The IMF and instability trends

Jordan’s relationship with the Fund is filled with memories of political upheaval. In 1989, five people were killed when it was reported by a resident that, “The riots…were ignited by price increases ordered as part of a debt rescheduling deal between Jordan and the International Monetary Fund.” Nearly a decade later, in 1996, with a fresh IMF deal signed, riots once again broke out, as did calls for the administration to resign.

As critics have noted for some time, political upheaval and public outrage due to hardship during IMF agreements are not an uncommon phenomenon (see Update 38). In the last year alone, mass demonstrations specifically targeting IMF programmes have taken place in, among others, Argentina, Egypt, Haiti, Sri Lanka and Tunisia. In Haiti, an IMF monitoring agreement secured in February 2018 resulted in drastic fuel price hikes of up to 51 per cent, triggering widespread violent civil unrest, resulting in the death of several people. In early July, Jack Guy Lafontant, the Haitian prime minister, resigned.

In response to the implications of IMF involvement in Haiti, Alston asserted in a July statement, “The fund has consistently underestimated the importance of calibrating their recommendations to the specific political context, not taking into account the extent to which recommendations are politically viable and socially sustainable.” He stated that such drastic fuel price increases were, “guaranteed to lead to a backlash and bizarrely, undermine the very programs the Fund is trying to implement.” Alston added, “The social and economic and political consequences of cuts of that size are very large.”

The remarks give further weight to the recent Independent Evaluation Office report on fragile states, like Haiti, which found that the IMF’s financial toolkit is “not inherently well suited to the circumstances of fragile states”, due to its relatively short-term focus and that within the Fund “less attention [is] paid to the ability to make a difference to countries’ policy making on the ground” (see Observer Summer 2018).

In Tunisia, IMF-backed austerity measures, as well as hikes in VAT and other taxes including on fuel and electricity resulted in widespread discontent on the streets of Tunisia in January (see Observer Spring 2018).

In Argentina, despite thousands repeatedly protesting an IMF deal, the government, led by President Mauricio Macri, reached an agreement on a 36-month Stand-By Arrangement of $50 billion in June – the largest credit line in the history of the Fund. Mass protests erupted in response, with demonstrators demanding jobs and calling for an emergency budget for the poor. One protestor said to the news outlet Al Jazeera, “We’ve seen the situation deteriorate since Macri took office. We see it in the soup kitchens, we walk the slums, and there is need.” In July, an alliance of Argentine trade unions and civil society sent a letter to IMF Managing Director, Christine Lagarde, once again stressing the opposition of civil society to the IMF deal (see Observer Summer 2018).

In Sri Lanka, protests broke out last year against a new Inland Revenue Bill, which protestors charged “was drafted by the IMF to slap higher taxes on people,” according to the Sri Lanka Daily Mirror, while last year also witnessed immense protests in Egypt over cuts, which the UK-based Guardian newspaper attributed to being intended to “overhaul Egypt’s moribund economy in order to receive a $12bn IMF loan.”

These examples provide new evidence that, as civil society and academics have long maintained, far from being neutral, the fiscal decisions relating to IMF programmes – either as a direct or indirect consequence of loan conditionality – are inherently political and potentially destabilising.

Yet, there appears to be an unwillingness within the institution to accept the impact of IMF policies on instability. In 2016, on the subject of the political economy of structural reforms in Spain, in the face of the widespread protests that took place in Spain that year, Zhu Min, then IMF Deputy Managing Director stated, “I think they [the Spanish government] are doing fantastic jobs”, noting the ‘maturity’ of European societies in understanding “that structural reform is a must.”

A radical change in the way the IMF deals with the political implications of its programming has been demanded by civil society since the days of the Structural Adjustment Programmes. Only last month, over 50 civil society organisations sent a letter calling on the IMF to drastically rethink its conditionality. The letter stated that, “restrictive fiscal and monetary policies prescribed in IMF loan conditionality squeeze the fiscal space needed for public investment and too often result in devastating consequences – particularly for marginalised groups – at high political cost.”