NGOs call for suspension of World Bank’s REDD programme: “This approach to forest protection simply has not worked”

The most cost-inefficient tree-saving scheme ever: The Forest Carbon Partnership Facility 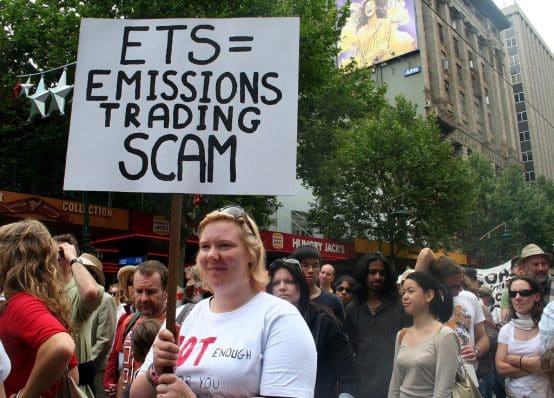 A climate protestor in Melbourne in December 2009, while COP15 meetings were taking place in Copenhagen. Credit: Takver

This Inside the Institutions analyses the role of the World Bank in carbon finance initiatives, including managing trust funds linked to carbon trading measures under the Kyoto Protocol, and supporting emissions trading schemes adopted by countries and sub-national entities.

Over the past two decades, the World Bank Group (WBG) has emerged as a major actor in initiatives to build carbon trading markets, under the United Nations Framework Convention on Climate Change (UNFCCC) process and beyond. The WBG currently acts as a trustee for 15 individual carbon funds and facilities. It maintains that the primary function of these funds is to encourage the development of a global carbon market and support carbon pricing and other instruments aimed at reducing global carbon emissions. The WBG has been active in the ‘proof of concept’ of carbon trading schemes – sometimes alternatively referred to as emissions trading systems (ETS) – creating the first-ever carbon fund with the establishment of the Prototype Carbon Fund in 1999. Since then, its activities have expanded considerably: According to a 2017 approach paper by the World Bank’s Independent Evaluation Group (IEG), the WBG’s total carbon finance portfolio tops $4.8 billion.

According to its website, the Bank facilitates Emission Reductions Purchase Agreements (ERPAs) by using “funds contributed by governments and companies in Organization for Economic Cooperation and Development (OECD) countries to purchase project-based greenhouse gas emission reductions in developing countries and countries with economies in transition.” The emission reductions are purchased through one of the Bank’s carbon funds or facilities on behalf of contributor nations, within the framework of the Kyoto Protocol’s Clean Development Mechanism (CDM) or Joint Implementation (JI). The CDM allows ‘Annex B countries’ – the 38 countries as well as the European Community that agreed to the Kyoto Protocol’s emissions targets – to implement emission-reduction projects in developing countries, earning them credits that count towards their respective Kyoto targets. JI allows a similar process to occur between fellow Annex B countries (i.e. other countries who have agreed to reduce emissions under the Kyoto Protocol). According to the Bank, “These so-called Kyoto funds have supported more than 145 active projects in 75 client countries. Since 2000, these initiatives have reduced the equivalent of 187 million tons of carbon dioxide emissions through the projects they support.”

In addition to facilitating ERPAs, the World Bank also provides advisory services to support the implementation of carbon finance schemes and projects. An example of such technical support is that provided to China by the World Bank’s Partnership for Market Readiness (PMR) scheme. This support focused on carbon market financing management and allowance allocation as a component of the design of a national ETS. Another role of the carbon funds and facilities is to monitor and provide input on the CDM regulatory process, including in the development of new methodologies and in research undertaken on methodological and policy issues related to the CDM.

Difficulty in assessing baseline price levels and the free allocation of carbon permits has led to an oversupply in the market, thus weakening carbon trading schemes and limiting their impact in regards to emissions reduction.

The Bank’s position on the need for carbon pricing was emphasised during the UNFCCC 21st Conference of Parties (COP21) held in Paris in 2015, during which both the Bank and the IMF argued that it would be impossible to sufficiently lower greenhouse gas (GHG) emissions without ‘making polluters pay’ through the widespread implementation of ‘cap and trade’ legislation (i.e. the establishment of carbon markets that put a price on carbon pollution, and limit the amount of credits available to purchase). Their commitment to ‘greening’ the finance sector and carbon pricing was reaffirmed in the lead up to COP22 in 2016 in Cancun, during a speech given by Bank President Jim Yong Kim at the 2016 WBG-IMF Annual Meetings. This commitment was reiterated within the Climate Change Action Plan 2016-2020, adopted by the Bank in April 2016, which outlines plans to further expand its focus on carbon pricing as well as improve the accessibility of concessional climate finance and encourage the growth of the green bond market at corporate, financial institution and municipal levels. Additionally, at the One Planet Summit in December 2017, the Bank announced that it would introduce ‘shadow’ carbon pricing in the economic analysis of proposed projects in its own lending portfolio.

Despite the emergence of ETS markets in North America, Europe and China, the jury is still out on whether they can be an effective tool to reduce global greenhouse gas emissions. The Institute for Climate Economics (I4CE) noted that: “As of April 1, 2018, 46 countries and 26 provinces or cities have adopted carbon pricing policies, consisting of carbon taxes and Emissions Trading Schemes.” However, while carbon pricing under these schemes varies widely, 75 per cent of these schemes price a metric tonne of carbon at less than $10, according to I4CE; this shows the limited efficacy of carbon markets in assisting effective climate action to date as, “To achieve the goals of the international community on climate change while sustaining economic growth, the High-Level Commission on carbon prices … recommends to reach a carbon price between USD 40 and USD 80 per ton of CO2 by 2020, and between USD 50 and USD 100 per ton of CO2 by 2030.”

In December 2017, China announced a long-anticipated national ETS initiative, which will apply to the country’s power-producing sector. 2020 appears to be the earliest realistic timetable the scheme could expect to start charging the country’s power producers for their GHG emissions. However, many analysts have pointed out that China’s scheme is likely to have little impact in terms of a ‘market signal’ that will change the behaviour of the country’s power producers, as the scheme does not include a hard ‘emissions cap’, and the cost of carbon pricing will have to increase substantially before it would have a considerable effect on emissions. As a January piece in online media outlet Carbon Brief noted, “Prices have been low in the pilots [for carbon trading in China], and with the mechanisms and processes for allocating or auctioning credits still unclear, it is hard to say if and when a price large enough to put pressure on emissions will emerge.”

Criticisms of carbon funds and facilities

A repeated criticism of the World Bank’s carbon funds and facilities is that they fail to actually significantly reduce emissions, despite this being their raison d’etre. Overall, carbon markets cover only roughly half the emissions of each participating region, limiting their effectiveness. Difficulty in assessing baseline price levels and the free allocation of carbon permits has led to an oversupply in the market, thus weakening carbon trading schemes and limiting their impact in regards to emissions reduction. As noted in the preceding section, carbon prices to date are far less than those thought necessary to meet the Paris Agreement’s target of keeping global average temperature rise ‘well below’ 2˚C from pre-industrial levels.

The World Bank’s efforts to kick-start Reduced Emissions from Deforestation and Forest Degradation (REDD), a sub-area of carbon finance, has also been criticised. In December 2017, civil society groups called for the suspension of the Bank-administered Forest Carbon Partnership Facility (FCPF), arguing that, “despite mobilizing commitments and contributions from donors such as the governments of Norway, UK and Germany totalling more than US$1.1 billion, the FCPF cannot point to a single gram of carbon that it has saved nor any emissions reductions payments that have yet been made.” Previously, an article published in REDD-Monitor in March 2017 documented the high administrative costs of the FCPF, noting, “administrative costs, ‘fund management’ charges, Bank staff and consultancies etc. have so far absorbed 64% of [the FCPF’s] total expenditure.”

Despite its investment into renewable energy globally, critics have further pointed out the apparent contradiction that the WBG’s own lending portfolio’s significant contributions to GHG emissions, via investment in fossil fuels projects. Despite positive steps in the autumn of 2017, including a commitment to track carbon emissions across its investment portfolio for the first time in 2018, and an announcement at the One Planet Summit that it will cease ‘upstream’ investments in oil and gas projects after 2019, the Bank still has a long way to go to align its lending portfolio with a low carbon future, including with respect to its development policy loans and financial intermediaries lending (see Observer Spring 2018).

Newly released study by Oxfam finds that the Bank’s claims of climate finance for FY2020 could be off by as much as 40 per cent, or $7 billion, highlighting the urgent need for greater public disclosure.

In the face of growing calls to ‘de-risk’ green investments for the private sector, academic experts call for developmental allocative green credit regimes, rather than market-led approaches.

Non-debt forms of financing essential, as many countries on front line of climate change face ‘polycrisis’ that threatens macroeconomic stability.

RST must support low- and vulnerable middle-income countries to recover from the pandemic and tackle economic and climate-related structural challenges.

Analysis of the IMF and World Bank Development Commitee communiqué published on 9 April from the 2021 World Bank and IMF virtual Spring Meetings.

Analysis of the G20 communiqué published on 7 April from the 2021 World Bank and IMF virtual Spring Meetings.

World Bank commits to invest additional $5 billion in the Great Green Wall over the next five years, despite shortcomings in its existing investments in the initiative highlighted by IEG.

NGOs call for suspension of World Bank’s REDD programme: “This approach to forest protection simply has not worked”

The most cost-inefficient tree-saving scheme ever: The Forest Carbon Partnership Facility