What you need to know about Jakarta’s water privatization 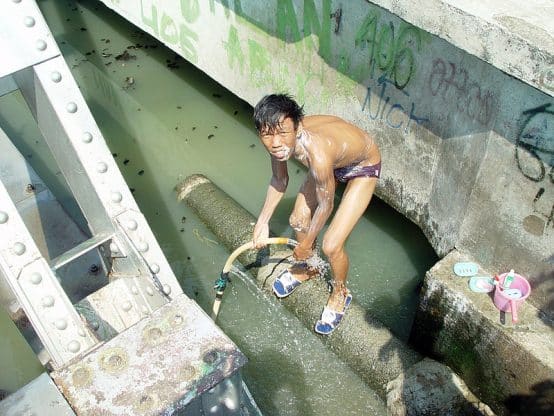 A boy bathes in a polluted river under a railroad bridge, North Jakarta Slums Indonesia

Ahead of October’s World Bank and IMF Annual Meetings in Bali, Indonesia, a group of more than 5,700 Indonesian women activists are calling for international civil society groups to join them in their efforts to ensure the government’s compliance with the Indonesian Supreme Court’s decision to ban water privatisation in Jakarta.

Water privatisation in Jakarta started in 1997 when, due to the city-owned company PT PAM Jaya’s failure to provide universal access to water, and following advice from the World Bank, then-president Suharto ordered the privatisation of water services. Back in 1991, the World Bank loaned $92 million to improve PT PAM Jaya services but, five years later, only 45.3 per cent of households had tap water coverage and the company was unable to recover 57 per cent of its costs. In 1997, PT PAM Jaya signed a 25-year contract with French and British companies to manage water supply services for Jakarta. The agreement was to provide tap water coverage to 98 per cent of the capital’s households. However, continuous complaints since then have highlighted lack of access in different parts of the city as well as service cuts to residents unable to pay required fees.

The lawsuit against the privatisation of water in Jakarta was filed in 2012 by the Coalition of Jakarta Residents Opposing Water Privatisation (KMMSAJ), but it was not until April 2017 – following a series of appeals presented by the two private water companies and the government of Jakarta – that the Court finally determined that the private water operators failed to protect residents’ human right to water and  ordered the government of Jakarta to restore public water services.

We also see the impact on quality of, and access to services when profit maximization becomes the imperative.Sandra Vermuyten, Public Service International (PSI)

In light of long-standing civil society resistance against privatisation of services, concerns are growing about the Bank’s recent shift towards leveraging private sector investment for development through its Maximising Finance for Development initiative, which promotes privatisation through public-private partnerships (PPPs) (see Observer Summer 2017, Winter 2017-18).

Public Services International (PSI) released a call to action in 2016 to push the Bank to stop promoting water privatisation through PPPs. This call for action was released after US Congresswoman Gwen Moore, a member the US congressional committee overseeing the World Bank, released a letter calling for an immediate termination to all funding and promotion of water privatisation, including water PPPs (see Observer Summer 2016).

Sandra Vermuyten, with PSI, commented: “We oppose reducing wages and working conditions to increase shareholder dividends and corporate profits. We also see the impact on quality of, and access to, services when profit maximisation becomes the imperative. Universal access to quality public services is one of the key foundations for just and equitable societies. Privatisation only ensures that the rich get richer and that global inequality grows.” She noted that, “The Bank should also assess the growing wave of remunicipalisation, where cities of all sizes and political stripes are returning privatised services to public ownership and management. We suggest instead that the World Bank support public-public partnerships. These proposals would help the government of Jakarta rebuild a public utility capable of ensuring that all Jakartans can exercise their human right to water.”

KMMSAJ’s call during Annual Meetings also echoes serious concerns raised in a 2014 letter by UN experts Philip Alston, Catarina de Albuquerque and Leilani Farha, concerning a similar case in Detroit, USA, which included a large-scale water shut-off linked to non-payment by users. The experts claimed that, “Disconnection of water services because of failure to pay due to lack of means constitutes a violation of the human right to water and other international human rights.”

What you need to know about Jakarta’s water privatization