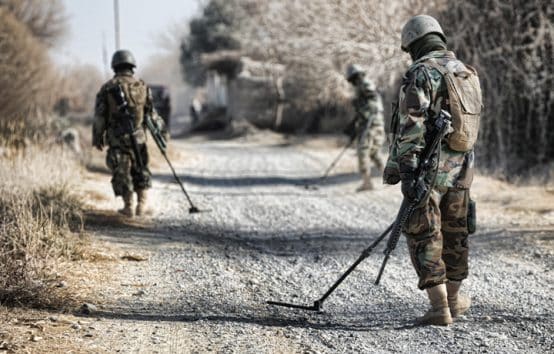 Members of the Afghan National Army search a road for improvised explosive devices. --- Photo by: Jonund

The Bank’s increased focus on fragile and conflict-affected situations (FCS) is reflected in April’s Sustainable Financing for Sustainable Development report. It can be seen in a variety of initiatives such as the establishment of the Fragility Conflict and Violence (FCV) Cross-cutting Solutions Area (CCSA), the doubling of International Development Association (IDA, the World Bank’s low-income lending arm) resources dedicated to FCS from $7 billion in IDA17 to $14 billion in IDA18. The stipulation contained in the general capital increase to be formalised at the upcoming World Bank and IMF Annuals Meetings, that the International Finance Corporation (IFC, the Bank’s private sector lending arm) must make 40 per cent of its investments in fragile and IDA-status countries by 2030 provides further evidence of the Bank’s ‘pivot’ to FCS (see Observer Summer 2018).

The consensus about the negative impact of violent conflict on the achievement of the Sustainable Development Goals (SDGs) is reflected in the inclusion of SDG 16, which aims to “promote peaceful and inclusive societies.” The rationale for the ‘pivot to prevention’ was outlined in a March World Bank report on maximising the impact of the Bank in FCS, which noted that, “by current projections the share of the world’s poorest people living amidst fragility, conflict and violence could reach 60 percent by 2030,” and stressed that, “FCV risks are diverse and increasingly linked with global political, economic, and social systems, meaning that the spillover effects of fragility can extend across the world.”

Despite these efforts, the Word Bank Independent Evaluations Group’s (IEG) 2014 and 2016 evaluations of the Bank’s operationalisation of the framework contained in the 2011 World Development Report on Conflict, Security, and Development, raise significant concerns about the Bank’s approach. These are particularly relevant in light of the above-mentioned expansion of the Bank’s role in these complex environments.

Better or just bigger in FCS?

Echoing the findings of IEG’s 2014 report on learning at the World Bank that “the incentives it offers employees … are not as effective as they could be”and that “about 70 percent … of [Bank] staff feel that the pressure to lend has crowded out learning,” IEG’s 2016 evaluation of operations in middle-income countries (MICs) stressed that the Bank, “is often reluctant to compromise lending volumes by an excessive focus on core drivers of violence: regional conflicts and governance.” The findings on the misalignment of incentives at the Bank to some extent mirror those of the IMF Independent Evaluation Office’s (IEO) April report on The IMF and Fragile States, which detailed the negative impact of incentive structures at the Fund on its operations in FCS (see Observer Summer 2018).

While the 2016 IEG evaluation stressed that continuity in staffing policy is needed to ensure the “deep understanding of the political economy” required for success in FCS, it observed it “was not common in cases observed.” The lack of local knowledge and understanding resulting from lack of continuity of staff on the ground is potentially exacerbated by factors identified by the IEG’s 2017 report on the Bank’s performance, which raised important questions about the extent to which Bank staff use IEG and external evaluations to “inform the World Bank’s operations as a matter of course” (see Observer Summer 2018). The IEG findings echo those of a July evaluation of the IEO, which found that the Fund does not learn enough from its internal evaluation (see Observer Summer 2018 online edition).

Maximising Finance for Development in FCS: Lacking a holistic approach

While the Bank’s Maximising Finance for Development strategy has been much criticised by civil society in general (see Observer Summer 2017), the IEG reports highlight important constraints to the Bank’s private sector work in FCS in particular. The 2014 evaluation concluded that, whilst the Bank considers growth and job creation important factors in limiting fragility, “for the country programs reviewed by IEG, the World Bank Group did not adequately address major constraints and did not have a holistic approach to private sector development.” Importantly, given the relevance of extractives in FCS, the evaluation concluded that “operations in FCS have not paid much attention to leveraging the investments in extractive industries to create spillovers in the economy.” With regards to agriculture, which is the largest economic sector in FCS economies and a significant source of employment, the 2014 evaluation found that, “World Bank Group support for agriculture has not been commensurate with its potential impact on employment, poverty reduction, and food security in FCS, and there have been significant gaps in strategic analysis and customizing agricultural interventions to the transition phase.”

Commenting on these conclusions, the 2016 evaluation highlighted that little has changed and that “the World Bank Group still lacks a holistic and sequenced approach to private sector development in FCV situations in non-FCS.” These findings are particularly concerning in light of the continued poor development outcomes of IFC investments, as documented in IEG’s 2017 evaluation of the Bank’s performance and the push by shareholders for increased IFC investments in FCS, as reflected in the establishment of the $2 billion IDA18 Private Sector Window and emphasis on private sector lending in the proposed general capital increase.

Categorisation of fragility remains a problem

The 2014 IEG evaluation reported challenges associated with the Bank’s use of the Country Policy and Institutional Assessment (CPIA) ratings to determine FCS status, as the instrument “is not based on analysis of fragility and conflict” and the “ratings [have] not been consistent with actual fragility and conflict risks in many countries.” While the FCV unit has been working on fine-tuning the CPIA to address some of the concerns raised by the IEG, the 2016 IEG evaluation noted that the CPIA ratings exclude MICs, where a significant number of conflicts take place. It also stressed that although FCV diagnostics were useful when used, their use was not the ‘norm’.

Concerns about the effectiveness of the classification used by Bank (and others) persist outside the IEG. The UK-based think-tank Overseas Development Institute’s Simon Maxwell noted in an August blog that the wide variety and inconsistency of definitions of fragility ‘debase’ the value of the categorisation. A 2014 UN background paper also questioned the effectiveness of the country categorisations generally.

Persistent concerns have also been raised about the Bank’s conceptual understanding of fragility and violence, with Aditya Sarkar of the World Peace Foundation emphasising in an April blog, for example, that the joint UN and World Bank Pathways for Peace report suffers from a bias toward large cross-country studies and that “the drivers and dynamics of these incentives [that generate/ perpetuate conflict] are neither sufficiently analyzed nor adequately theorized.”

This critique is consistent with that of Professor Christopher Cramer from the School of Oriental and African Studies in London, who in a 2005 paper for the UN Research Institute for Social Research highlighted “the empirical  weaknesses  of  the  vast  majority  of  claims  made in this field, particularly those based on large sample statistical tests of inequality-conflict hypotheses.”