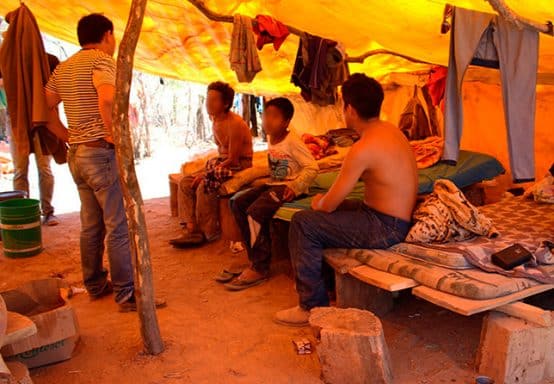 Workers living in tents exposed temperatures of up to 50ºC, Chaco, Paraguay

In August, the Brazil-based news outlet Reporter Brasil, with support from the International Trade Union Confederation (ITUC), released a report detailing human rights violations and environmental harm resulting from the rapid expansion of the cattle industry in the Paraguayan Chaco, South America’s largest dryland forest. The report highlighted the International Finance Corporation’s (IFC, the private sector arm of the World Bank) direct involvement in the alleged violations through a 2013 $85 million investment in Brazilian company Minerva, one of the largest meat companies in South America.

The IFC’s 2012 Environmental and Social Review Summary determined that the project was Category A (i.e. high-risk), identifying specific supply chain risks that included deforestation, child and forced labour, encroachment on indigenous peoples’ land and disregard of customary rights by Minerva’s primary suppliers. According to the report, cattle production has expanded significantly in the region in recent years, with large portions of land deforested to respond to the needs of the industry, as observed by satellite surveillance conducted by the environmental organisation Guyra in November 2016, that showed an average of 2,000 hectares of land cleared every day.

The region is also home to indigenous groups, such as the Guarayos and the Chamacocos, with unresolved claims to land, as well as widespread child and forced labour conditions in agriculture. As shown in a 2016 case in Boqueron, in the north of the country, 35 workers were rescued from slave labour conditions at a cattle ranch owned by a Mennonite colonist, a group largely involved in cattle farming in the Chaco. Repórter Brasil submitted a number of questions to Minerva regarding its operations in Paraguay, including whether the company acquired cattle from farmers involved in forced labour in the Chaco, but Minerva said it would not comment.

The World Bank and IFC should support the expansion of government inspections and third-party monitoring in Paraguay.Leo Baunach, International Trade Union Confederation

The IFC responded to the Reporter Brasil-ITUC investigation in August by stating that Minerva is required to comply with the IFC’s Performance Standards and implement an Environmental and Social Action Plan (ESAP), and that the IFC has been working with Minerva since 2012 to monitor the company’s efforts to manage the sustainability of its supply chains across South America. It also argued that Minerva is investing significant resources to improve its environmental and social practices in the region and is currently monitoring the risk of child and forced labour in Paraguay. The IFC added that the company will not purchase cattle from ranchers found in violation of labour rights by the authorities.

The IFC also recently updated its Environmental and Social Action Plan in relation to Minerva’s supply chain in Paraguay for 2018-2020. The new requirements address issues such as traceability of cattle purchase criteria and the prohibition of sourcing from ranches located in protected or indigenous areas officially recognised by the Paraguayan government. However, there are still concerns related to labour, as Minerva is required to incorporate labour issues in the supply chain management system only once an adequate dataset is publicly available. Minerva has therefore attributed the lack of action and monitoring to the lack of official data. Civil society complaints related to the IFC’s lack of monitoring of labour conditions in its borrowers’ projects are well documented, including in Indian tea estates (see Observer Winter 2017).

In response to Minerva’s updated ESAP, Leo Baunach, from ITUC, commented that, “Minerva has a 40 per cent market share of beef exports from Paraguay. As a leading company and recipient of IFC financing, Minerva has a responsibility to proactively monitor their Chaco supply chain for forced and child labour. Progress had been made to stop sourcing from indigenous and illegally deforested lands. This should be matched by measures to prevent labour abuse. On a broader scale, the World Bank and the IFC should support the expansion of government inspections and third-party monitoring in Paraguay.”

The United States Agency for International Development (USAID) published a report in 2017 noting that, “IFC-Minerva agreement included commitments to assess, identify, and remedy cases of forced or child labour in Minerva’s primary supply chain.” In addition, “the agreement included a commitment to implement a supply chain verification system involving assessment and identification of risks and limiting procurement to those suppliers that can demonstrate that they are not contributing to significant conversion of natural and/or critical habitats.” However, USAID found that four years after the agreement, in 2017, “there are still no concrete mechanisms in place to guarantee that cattle purchased from producers in the Chaco have not grazed on illegally deforested land or to make sure that indigenous workers are not subjected to slave labour conditions.”

Additionally, the United Nations is soon expected to release a report on forced labour and debt bondage among indigenous communities in the region.