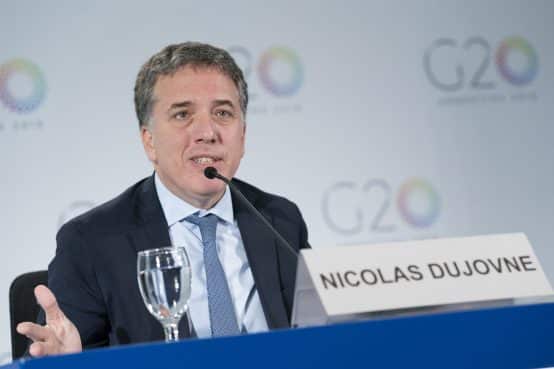 Nicolás Dujovne, Minister of the Treasury of Argentina, speaks at the G20 press briefing on 12 October in Nusa Dua, Bali. Credit: IMF.

The G20 did not issue a communiqué at the World Bank and IMF 2018 Annual Meetings in Bali, but Nicolás Dujovne, Argentine Minister of the Treasury, did give a press briefing on 12 October, outlining key points of the discussions that ministers had undertaken during their two-day meeting, the Fourth of Argentina’s G20 presidency.

According to the G20’s press release, “During the meeting, which was held on the margins of the International Monetary Fund (IMF) and the World Bank annual meetings, over 50 heads of delegation held sessions on international financial architecture; the Compact with Africa initiative, launched under the 2017 G20 to promote private investment in the African continent; and the agenda on financial inclusion.”

The recent debt crises in Argentina and Turkey were euphemistically alluded to by Dujovne in his opening statement of the press briefing: “As monetary policy continues to normalize in advanced economies, financial conditions tighten in emerging ones, and several emerging economies have experienced market volatility.” As Argentina received the largest IMF bailout in the institution’s history in July this was indeed an understatement (see Observer Summer 2018). Additionally, interest rates rises by the United States have raised the prospect of wider debt crisis contagion in countries already expressing debt distress, according to the IMF (see Dispatch Annual Meetings 2018).

Bringing shadow banking into development doesn’t just promote the privatization of public services, but may usher in permanent austerity along the lines of ‘privatizing gains, socializing losses’Open letter from concerned academics

On mounting trade tensions between G20 members, namely the US and China, Dujovne commented, “We agreed that international trade is an important engine of growth, and we need to resolve tensions which can negatively affect market sentiment and increase financial volatility.” In response to a question from a journalist about the G20’s reaction to US protectionism, Dujovne said, “The G20 can play a role in providing the ground for the discussion, but of course the differences that still persist should be resolved by the [G20] members that are directly involved in the tensions.”

With the prospect of market volatility and trade tensions undermining the global economy’s fragile post-crisis recovery, the G20 remained determined to elevate investments in large-scale infrastructure as a key driver of growth. Dojovne said, “given [infrastructure’s] importance for economic prosperity, sustainable development and inclusive growth, … we have focused on how to catalyze private sector investment in infrastructure by putting in place the necessary conditions to develop infrastructure as an asset class.”

An open letter signed by more than 90 academics, and released on the eve of the G20 meetings, raised concerns about the G20’s move to promote infrastructure as an asset class, which is seen as operationalising the World Bank’s Maximising Finance for Development (MFD) approach (see Observer Summer 2017). The letter noted: “the new strategy for achieving the Sustainable Development Goals is to use shadow banking to create ‘investable’ opportunities in infrastructure, water, health or education and thus attract the trillions in global institutional investment. … Bringing shadow banking into development doesn’t just promote the privatization of public services, but may usher in permanent austerity along the lines of ‘privatizing gains, socializing losses’. More fundamentally, it seeks to re-engineer poor countries’ financial systems around capital markets that can attract global investors.” Completing the G20’s push to standardise infrastructure as an asset class will now be the job of Japan’s G20 presidency in 2019.

Standardising infrastructure as an asset class was just one of the recommendations of a report released by the G20 Eminent Persons Group (EPG) in tandem with the ministerial meetings. The report also called for steps to be taken to increase standardisation across IFIs, in order to enhance the coordination between themselves, private investors and large NGOs and philanthropies more generally. The report claimed, “Governance reforms within the IFIs themselves should cut back on today’s significant overlap between Board and Management responsibilities. They should enable Boards to focus more on strategic priorities” – raising concerns that this may lead to less board oversight of individual project approval.

On this and other issues, the G20 appears to have the right diagnosis of macroeconomic ills, but the wrong prescription for how to ensure its reforms are aligned with people-focused, sustainable development.