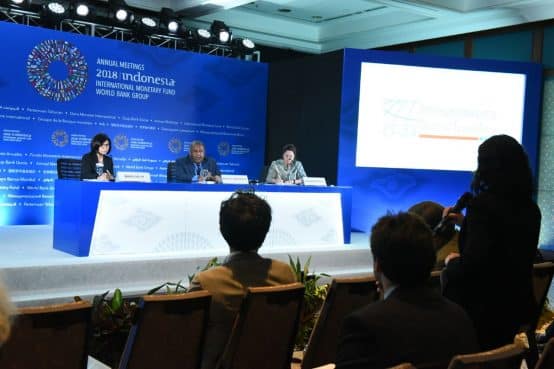 Meeting of the G24 in Bali. Photo: Aldo Caliari

The G24 is a grouping of some of the most influential developing countries in the World Bank and IMF. It includes G20 countries such as India, Argentina, Brazil, Mexico, and South Africa, and also Egypt, Iran, Nigeria, Venezuela, as well as a number of other countries. The G24 communiqué is traditionally the first statement of the meetings.

The Intergovernmental Group of Twenty-Four on International Monetary Affairs and Development (G24) held its 100th meeting in Indonesia during the IMF and World Bank Annual Meetings and published its communiqué on 11 October. In a similar vein to the it’s predecessor in April, and in line with growing concerns from civil society about the uneven distribution of growth, the communiqué stressed that, “While the recovery of global growth continues, risks have shifted to the downside.”

The G24 was far from alone in using the Bali Annual Meetings to highlight its concern at the global economic outlook. Yet despite the difficulties ahead, from the diversification of global creditors to unsustainable debt levels, geopolitical tensions dominated the meetings – particularly concerning the capacity of emerging market and developed economies (EMDEs) to adapt to the risks that are materialsing – signalling troubled waters ahead amidst a growing crisis of multilateralism. Sadly, the G20 Eminent Persons Group’s (EPG) report on Global Financial Governance, which was submitted to the G20 finance ministers in Bali, seems to indicate that the G20 plans to address the crisis of multilateralism through its own version of the ‘race to the bottom’ in terms of anti-democratic global governance, as highlighted by a recent Heinrich Boell Foundation report.

Given that EMDEs are likely to continue to shoulder the lion’s share of the consequences of the trends that preoccupied the meetings, significant portions of the communiqué were dedicated to urging greater and more equitable support from developed economies and more equitable power distribution within the Bank and Fund. Demands for change ranged from long-standing calls for quota reform benefiting EMDEs in both the Fund and Bank (and the establishment of a third chair for Sub-Saharan Africa without it being at the expense of an EMDE chair), increased access limits to the IMF’s Poverty Reduction and Growth Trust, a call for a reversal of falling official development assistance to low-income countries (LICs) and the elimination of the accelerated clause for International Development Association (IDA, the Bank’s low-income lending arm) graduates.

In recognition of existing challenges, the G24 stressed that, “We are concerned with the uncertainty from the trade tensions and protectionist sentiments that further cloud our growth outlook”, adding that it recognises the urgency of domestic policy actions to strengthen resilience and stating that it is “ready to participate in global efforts to improve the global trading system so that it facilitates sustainable development, ensures a fair distribution of benefits and keeps pace with technological change.”

Rising concerns about global debt vulnerabilities feature heavily in the communiqué, which urges the international financial community to strengthen its support of developing countries’ efforts to deal with the interrelated challenges of debt and growth, calling for “stronger and faster action from the IMF, World Bank Group (WBG), multilateral partners and donors on capacity building for fiscal and debt management, improving debt transparency and developing domestic capital markets.” As the Bretton Woods Project Annual Meetings Preamble highlighted, ten years on from the 2008 global financial crisis, global debt stands at $250 trillion and, according to IMF research, only one in five LICs has a low risk of plunging into a debt crisis, as average debt-to-GDP ratios in LICs exceed 40 per cent with no sign of retreat.

The call for great support to EMDEs on the debt management front has been strongly supported by civil society throughout the years. Progress to date however remains decidedly mixed. Despite the IMF embarking on a 2017 Debt Sustainability Review in an effort to alleviate some of these concerns amidst mounting debt, its outcome was heavily criticised by debt justice campaigners who accused the IMF of tinkering around the edges in the face of the looming debt crisis (see Observer  Winter 2017-2018). Additionally, this year the IMF published the outcome of its LICs facilities review. While some of the demands set out by a joint civil society consultation response were met, others – such as the creation of an independent debt relief mechanism – were not, leaving lingering concerns about soaring levels of global debt and economic volatility.

The communiqué does however call for IMF and WBG to support developing countries vulnerable to natural disasters, including by “utilizing innovative approaches to help countries build resilience and unlock climate change financing.” The recommendation chimes with the LICs facilities review consultation response which calls on the IMF to support countries vulnerable to natural disasters.

On private finance, in spite of the array of civil society concerns on the current approach, such as those articulated in a letter signed by eminent international academics, the G24, noting that “private financed for infrastructure and development is unlikely to reach the scale [needed]… to support the Sustainable Development Goals,” called on multilateral development banks (MDBs) to “harness the untapped potential to pool and diversify risks across the MDB system, create new asset classes for private investors and draw on their respective strengths to maximize development impact in supporting country-led programs” adding a call to “urgently scale up their financing ambition and development effectiveness.” This call is disturbingly in line with the EPG report, which was heavily critised by the Heinrich Boell Foundation for its detrimental focus on counter-productive, if potentially lucrative initially (for some), promotion of the securitisation of development finance through, for example, the transformation of infrastructure into an asset class. The EPG report was also criticised by Heinrich Boell for endorsing an anti-democratic reordering of the multilateral system at the expense of the UN and the likelihood it would further “diminish country ownership and repress civil society” by, inter-alia, the “[streamlining of] decision-making within the system” as is the case in the Asian Infrastructure Investment Bank. Echoing concerns raised by the letter submitted by international academics, the report stresses the threats posed by the proposed securitisation of development assistance, noting “Securitization is not possible without “de-risking” development projects, but this can involve transferring unsustainable risks from the private to the public sector.”

The communiqué’s call for the creation of new asset classes to attract (mostly foreign) investment follows two damning reports released in January and March, exposing the scale of damage caused by public private partnerships (PPPs) in the UK and Europe and civil society report detailing the consequences of 10 failed PPP projects. These reports add more weight to broader concerns around private finance, from debt sustainability to the creation of extractivist and dependent economies, ultimately posing a threat to the achievement of the Sustainable Development Goals (SDGs) (see Observer  Winter 2017).

With regards to IMF surveillance, the communiqué noted that “a continued even-handed and context-based assessment of macro-prudential and capital flow management measures is important to support countries in implementing appropriate measures to ensure financial stability.” This is particularly important given the upcoming IMF surveillance review. The surveillance review takes place in light of this year’s conditionality review, which saw over 50 civil society organisations send a letter calling on the IMF to drastically rethink its conditionality stating that, “restrictive fiscal and monetary policies prescribed in IMF loan conditionality squeeze the fiscal space needed for public investment and too often result in devastating consequences – particularly for marginalised groups – at high political cost.” This year alone, mass demonstrations specifically targeting IMF programmes have taken place in, amongst others, Argentina, Egypt, Haiti, Sri Lanka and Tunisia (see Observer Summer 2018).

The communiqué further states that the G24, “look forward to the Fund’s actions to enhance engagement with fragile states”, giving further weight to the recent Independent Evaluation Office report on fragile states, like Haiti, which found that the IMF’s financial toolkit is “not inherently well suited to the circumstances of fragile states” (see Observer Summer 2018).

Of particular importance to the upcoming delayed 15th general review of quota, the G24 finished by stressing concern for the delayed process and calling on the IMF and the WBG to “strengthen their efforts toward addressing the severe under-representation of some regions and countries in recruitment and career progression, including at the managerial levels.” Civil society has long called for a voting system that moves away from the unequal weighting that prioritises wealth over democracy, fuelling a sense of lost confidence from low income member states and squeezing the space for a diversity of voices.