Trump scorns the IMF’s globalism, and now he gets to vote on it 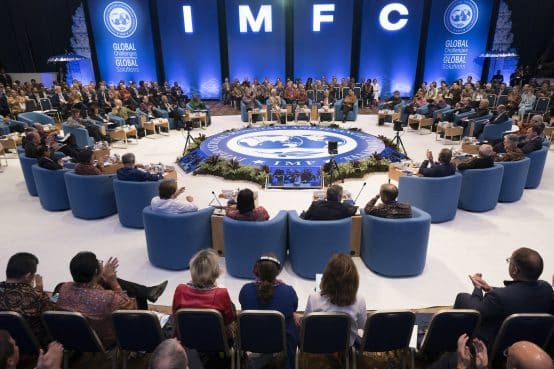 Analysis of the communiqué of the 38th meeting of the International Monetary and Financial Committee (IMFC) in Bali, Indonesia, issued on 12 October 2018. The IMFC is the direction-setting body of finance ministers and central bank directors for the IMF. The communiqué of the IMFC sets out the consensus position about the direction and reform of the Fund. The ministerial statements to the IMFC, often revealing of the differences of opinion amongst the IMF’s membership, are also made available online.

In its 38th meeting communiqué, reflecting the 2018 World Economic Outlook, the IMFC took a more bleak position than it had in the Spring, noting that some of the risks previously identified were now partially being realised. Thus, despite strong global growth, the IMFC focused on a growing laundry list of concerns, including rising trade tensions, geopolitical strains, tighter financial conditions, policy uncertainty, historically high debt levels, rising financial vulnerabilities and limited policy space. The Committee echoed Fund Managing Director Christine Lagarde’s urgent call for action that, “we need to steer the boat, not drift … as the global economic weather is beginning to change”, noting that the “window of opportunity” identified at the Spring Meetings is narrowing. In order to provide much-needed confidence, the IMFC declared that it “will act promptly…to advance policies and reforms to protect the expansion, mitigate risks, rebuild policy space, enhance resilience, and raise medium-term growth prospects,” adding some more policy depth to their communiqué.

Without reference to Argentina or Turkey and likely reflecting persistent US allegations of Chinese currency manipulation, the Committee recognised, “that excessive volatility or disorderly movements in exchange rates can have adverse implications for economic and financial stability.” It went on, “We will refrain from competitive devaluations and will not target our exchange rates for competitive purposes.” In regard to the Fund’s role in the ongoing trade disputes, the communiqué noted that the Fund, “will work together to reduce excessive global imbalances in a way that supports sustainable global growth.”

The Committee highlighted the need for “appropriate policy responses” such as “avoiding procyclicality” and “raising the quality of infrastructure and workforce skills.” In urging progress on  financial and structural reforms, in a departure from the last couple of communiques, the IMFC stressed the need to “effectively [assist] those bearing the cost of adjustment”, as well as the implementation of the financial sector reform agenda, and pledged to “address challenges from demographic shifts and enhance inclusion.” The communique also highlighted the need to guard against fragmentation of financial regulation. While the IMFC’s continued support for tax cooperation efforts, whereby it was unsurprisingly silent on long-standing civil society demands for a UN intergovernmental tax commission (see Observer Spring 2018), and inequality was less visibly on the agenda than previous years, more communiqué real-estate was dedicated to the IMF working on climate change mitigation and adaptation strategies, as well as to the new IMF and World Bank Bali Fintech Agenda, launched during the Annual Meetings.

Discussions on WTO reforms look frivolous in the face of the existential threat the WTO faces by the recent action taken by the current US administrationErnesto Zedillo, Yale University

On debt vulnerabilities, in light of the emerging debt crisis in low-income countries, and reflecting the advice of the 2018 Fiscal Monitor, the IMFC called on the IMF to focus on enhancing debt transparency and, perhaps informed by the recent Mozambican crisis (see Observer Summer 2018), sustainable financing practices by both public and private debtors and creditors. The IMFC also committed to “strengthen creditor coordination in debt restructuring situations, drawing on existing fora”, bringing to light the uncertainty of coordinating debt restructuring in a new environment in which the Paris Club is no longer the only major creditor in town and coordination with China must be considered. The focus on “existing fora” seems once again to disregard long-standing civil society calls for a multilateral legal framework for debt restructuring.

On trade, in addition to once again reaffirming the conclusions of the 2017 G20 Hamburg Summit on trade, the IMFC recognised the need to “step up dialogue and actions” including on “ways to improve the WTO to face current and future challenges”, amidst what Lagarde earlier called a “flurry of welcome discussions and proposals to strengthen the WTO.” It also called on the IMF to enhance its work in defense of trade, as with its recent joint work with the WTO and World Bank. The focus on WTO reforms seemingly ignored the dire warnings of Ernesto Zedillo of Yale University expressed on a trade panel, arguing that discussions on WTO reforms look frivolous in the face of the existential threat the WTO faces by the recent action taken by the current US administration, to which Lagarde responded he “might be very right”.

The IMFC also welcomed a number of internal reviews that civil society organisations have been closely following, including the 2020 comprehensive surveillance review, the ongoing conditionality review, the development of a strategic framework on social protection, the upcoming SDG review, and the implementation of management’s plan in response to the Independent Evaluation Office’s recent evaluation on fragile states. The completion of the 15th General Review of Quotas, aimed at increasing voting shares for emerging and developing countries, is expected to be completed in 2019.

Finally, the now familiar support for increasing gender diversity in the IMF’s executive board was once again included, with three women out of 24 IMF executive directors currently serving. Perhaps the message did not sound convincing coming from an IMFC meeting, which attendance records showed included one woman out of 24 governors and alternates.

Trump scorns the IMF’s globalism, and now he gets to vote on it