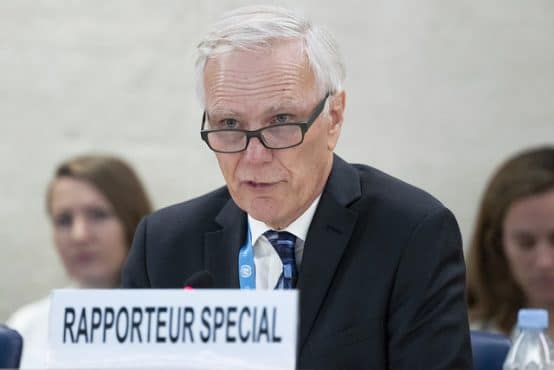 An October report by Philip Alston, the UN special rapporteur on extreme poverty and human rights, on the effect of privatisation on human rights, has heavily criticised the World Bank and IMF’s aggressive promotion of it, arguing that widespread privatisation of public goods in many societies is “systematically eliminating human rights protections and further marginalising those living in poverty.”

Following in the footsteps of numerous UN reports, this report warned against a “tsunami of unchecked privatisation” that has transformed arguments for fiscal deficit reduction into an ideology of governance that devalues public goods and services (see Observer Spring 2017, Autumn 2017). The IMF and World Bank, it claims, are at the heart of this process.

A 1992 World Bank report stated that, “There are virtually no limits on what can be privatized.” More than two decades later and the Bank’s Private Participation in Infrastructure Database – which tracks projects in 139 countries – lists $1,758 billion in total private investment. Indeed, commenting on the Bank’s Billions to Trillions and subsequent Maximizing Finance for Development agendas – which explicitly prioritise private financing and private sector solutions – Alston noted that these result in “profitable enterprises being reserved to the private sector and unprofitable activities remaining publicly financed” (see Observer Summer 2017).

Reverse the presumption, now fully embraced by actors such as the World Bank, that privatization is the default setting and that the role of the public sector is that of a last-resort actor that does what no one else can or wants to do.Philip Alston, UN special rapporteur on extreme poverty and human rights

Alston’s report also noted that – unlike the tracking of business performance – impact studies on human rights and poverty were rare for private sector projects. A 2017 report by Zeid Ra’ad Al Hussein, the UN High Commissioner for Human Rights, lamented that while, “Infrastructure, if well-conceived and implemented, is vital for the realisation of many human rights … human rights are rarely given more than lip service [in] the macho world of mega-infrastructure” (see Observer Summer 2017).

A central recommendation in Alston’s report is a call to “reverse the presumption, now fully embraced by actors such as the World Bank, that privatization is the default setting and that the role of the public sector is that of a last-resort actor that does what no one else can or wants to do.”

IMF and privatisation: A hidden friendship

In 2014, when asked about the legacy of IMF’s Structural Adjustment Programmes, IMF Managing Director Christine Lagarde responded, “Structural adjustment? That was before my time, I have no idea what it is. We don’t do that anymore.” In contrast, the Alston report declared that while the Fund “claims to have introduced major changes to some of its Washington Consensus-era policies, the emphasis on the privatization of a range of public sector enterprises and activities continues to feature prominently.”

The report includes an appraisal of ten recent African Article IV staff reports – the Fund’s tool for conducting economic surveillance at a country level (see Inside the Institutions) – revealing that the IMF promoted privatisation in six cases, with most of the remaining governments already demonstrating a commitment to public private partnerships (PPPs) and associated projects. Awkwardly for the IMF, these findings were published just days after the IMF released a note warning against PPPs, emphasising that, “while in the short term, PPPs may appear cheaper than traditional public investment, over time they can turn out to be more expensive and undermine fiscal sustainability.”

Alston’s report further highlighted the indirect way in which privatisation can be promoted, whereby fiscal consolidation encourages governments to retreat from direct service provision. According to new research by Brussels-based civil society network Eurodad, 23 of the 26 IMF loans approved in 2016 and 2017 aimed to achieve fiscal consolidation, with 30 structural conditions in these programmes explicitly calling for privatisation measures.