Learning from the past: Public finance and democratic control are key to achieving the SDGs 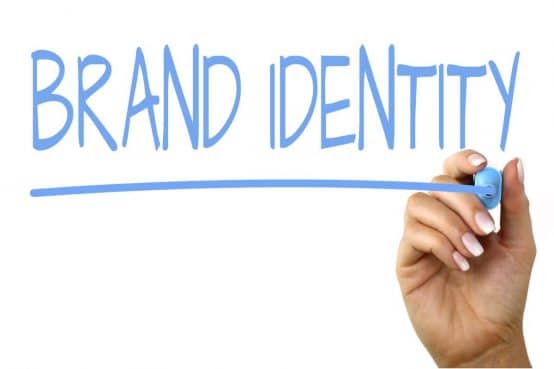 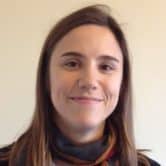 The IMF is increasingly claiming a role for itself as an important player in the implementation of the Sustainable Development Goals (SDGs). However, when it comes to the SDGs, is the Fund a help or a hindrance?

Even before the adoption of the 2030 Agenda and SDGs in 2015, the IMF declared itself “fully committed” to delivering the new goals. However, in practice this commitment has been patchy at best, with not much evidence of any meaningful realignment. In 2017, the IMF promised that it would prepare an “in-depth assessment of the scope and effectiveness of IMF support for the implementation of the 2030 development agenda” in 2018. This never emerged. Instead, now we have a colourful new SDGs page on the IMF website that showcases how their work supposedly supports efforts towards achieving the goals (collating several listicle-type blog posts like “5 things you need to know about the IMF and climate change”). IMF rhetoric about the SDGs has also stepped up, with a speech by Christine Lagarde declaring them the “right response to the great challenges of the 21st century”, and the publication of a new IMF paper estimating the cost of meeting the SDGs.

Taken at face value, it seems churlish to sneer at a declaration of commitment to sustainable development. However, we have to ask ourselves whether the IMF’s actions are indeed conducive to ‘Transforming Our World’, the official title of the SDG Agenda.

The IMF is instead merely using the SDGs as a public relations exercise to justify what it is already doingKate Donald, CESR

SDG 10, which aims to reduce inequality within and among countries and is up for special review at the UN High-Level Political Forum in July, is a particularly useful case study. The Fund claims it is supporting this goal through “strong, inclusive and sustainable growth with poverty eradication,” and, “gender equity and inclusion” (see table below). This is, at best, cherry picking. Goal 10 includes a target to reduce inequality through social protection and fiscal and wage policy. The Fund’s approaches to all three of these have been subject to robust criticism, precisely for exacerbating inequalities (see Observer Spring 2019). Indeed, despite a recent pivot towards defining income and gender inequality as ‘macro-critical’ issues, evidence gathered by Oxfam and the Bretton Woods Project, among others, suggests that the IMF’s own policy recommendations and loan conditionality have in fact been – and continue to be – a major contributor to the inequality crisis. For example, in many countries the Fund persists in pushing austerity measures which have taken a heavy human rights toll on the poorest and most disadvantaged groups, including women.

It is also worth highlighting that Goal 10 includes tackling inequalities between countries. Conveniently, none of the IMF materials on the SDGs seem to mention that target 10.6 is to, “Ensure enhanced representation and voice for developing countries in decision-making in global international economic and financial institutions in order to deliver more effective, credible, accountable and legitimate institutions.” What are the IMF and its ‘developed’ country members doing to meet this target, on which they could have a very immediate and direct effect? Will it explicitly link its upcoming quota review to this target? Certainly, the power imbalances in global economic decision-making are a profound cause of global inequalities; for example, the stranglehold of rich countries over the rules of the global tax system perpetuates a situation where billions of dollars are drained from poorer countries every year. The billions that could be raised through measures like tackling transnational tax avoidance and evasion and taxing wealthy individuals and corporations at higher rates, are studiously ignored – a consequence of treating the commitment to reduce inequality between countries as a matter of rich-country discretion or largesse, rather than as a human rights obligation. There are a lot of policy areas where the IMF could be doing much, much more in this regard: preventing the ‘race to the bottom’ on corporate tax rates rather than advocating for cutting them, and deepening its efforts to prevent cross-border tax abuses. However, the IMF paper on financing the SDGs almost entirely ignores progressive, systemic tax reforms as an option, focusing instead merely on improving tax-to-GDP ratios and spending efficiency. 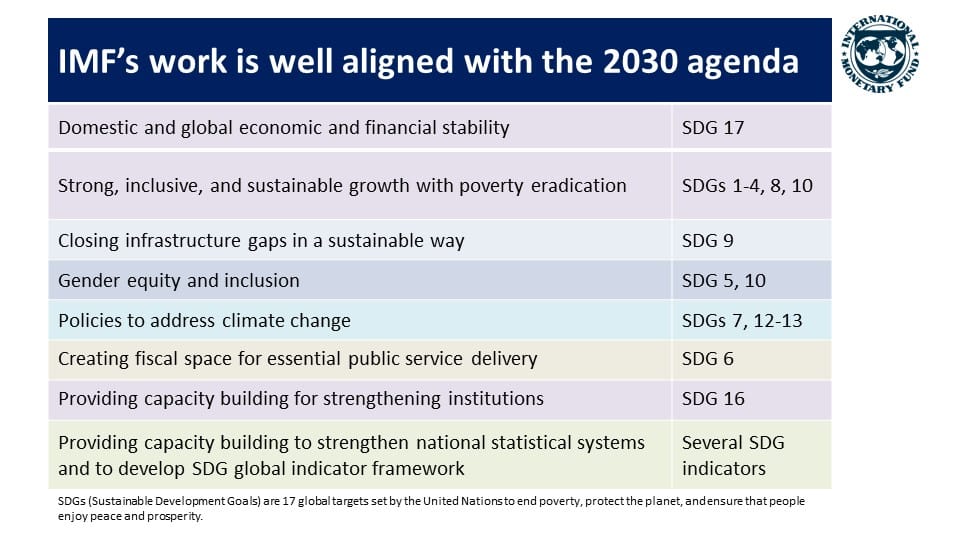 The IMF’s colourful yet superficial approach to the Sustainable Development Goals – Source: IMF

The 2030 Agenda is supposed to be transformative. It is very clear that business-as-usual policies or band-aid approaches to the worst social problems won’t get us there. This is especially so for Goal 10, and the Agenda’s overarching commitment to ‘Leave No One Behind’. We won’t really tackle inequality in any meaningful way if we rely on regressive tax systems, labour market ‘flexibilisation’ and exploitative, extractivist economic models, and then just compensate the worst losers with pared back, targeted ‘safety nets’ that are not even effective in reaching those in need. If we want to really tackle inequality, we need to hone in not just on those left (or pushed) behind, but those who are too far ahead – it is after all the acceleration of the 1 per cent away from the rest that has fueled the inequality crisis. But instead, the IMF has continued to emphasise regressive taxes like VAT rather than reining in and redistributing the incomes and wealth of the top 1 per cent and multinational corporations.

Ultimately, what is most disappointing is that, rather than seizing a much-needed opportunity to question and realign its practices and priorities based on the SDGs, the IMF is instead merely using the SDGs as a public relations exercise to justify what it is already doing, no matter how incompatible this may be with truly equitable sustainable development. Sadly, this approach is very much in line with the increasingly popular fad, especially among big business, of ‘SDG washing’. But coming from the IMF, which has a profound influence over global macroeconomic conditions and therefore the enabling (or currently, disabling) environment for sustainable development, these contortions are deeply irresponsible.

by Kate Donald, Center for Economic and Social Rights

Learning from the past: Public finance and democratic control are key to achieving the SDGs