Comment on the resignation of World Bank President Kim

'That position is ours': Another European to head the IMF

Appointment of the World Bank president

One man, one vote, one option: World Bank set to coronate Kim for second term 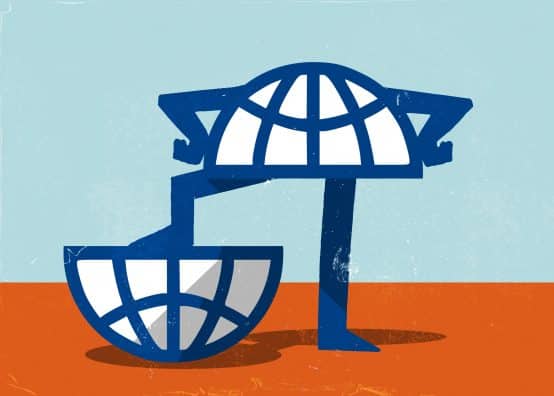 This edition of the Observer was published before the World Bank announced the appointment of the new president, which is expected on Friday 5 April, according to Global Capital

After the unexpected resignation of World Bank President Jim Yong Kim in January, the selection of his successor was subject to considerable scrutiny. Over 150 civil society organisations, academics and other individuals called on the Board to live up to its commitment following Kim’s departure to an open, transparent and merit-based process. The call was echoed by the demands outlined in a January letter by the Bank’s own staff association. These demands are not new and resonate with long-standing calls to end the so-called ‘gentleman’s agreement’, which ensures that the IMF managing director is a European and the World Bank president a US national. They also reflect the calls made as far back as 2012, not by civil society activists or ‘disgruntled’ governments from the Global South, but by senior Bank staff. Former Chief Economist Joseph Stiglitz and Senior Vice-Presidents François Bourguignon and Nicholas Stern argued in a 2012 Financial Times article that the process is “not only hypocritical, it also destroys the trust and spirit of collaboration needed to manage the profound problems facing the world.”

With the nomination process running from 7 February to 14 March, the United States nominated David Malpass, a senior Treasury official highly critical of multilateralism. Critics highlighted his statements that “globalism and multilateralism” had “gone substantially too far, to the point that they are hurting US and global growth.” Environmental civil society organisations such as US-based Oil Change International also criticised Malpass’ nomination on the basis of his views on climate change. Stressing Malpass’ time at the now bankrupt Bear Stearns in the lead up to the global financial crisis and his August 2007 Wall Street Journal op-ed titled “Don’t panic about the credit market”, a March 2017 article on news outlet Vox on his appointment to the US Treasury, commented on Malpass’ “poor judgment about major economic issues over the past decade – cheerleading the economy on the verge of the Great Recession while warning of a collapse just as recovery was getting underway.” Concerns about Malpass’ nomination were also raised by senior US policymakers. Congresswoman Maxine Waters, Chairwoman of the House Financial Services Committee, and Congressman Emanuel Cleaver, Chairman of the Subcommittee on National Security, International Development, and Monetary Policy, stated in a February press release that, “It’s difficult to believe that any serious effort to find a qualified candidate with a compelling vision for the mission of the World Bank and a belief in the legitimacy of international development finance would lead to the nomination of Treasury Undersecretary for International Affairs David Malpass.” The nomination of David Malpass also fell short of the demands of civil society, academics and other signatories to an open letter to the Executive Board, which stressed that “candidates must have proven knowledge of – and experience working on – development issues and a commitment to the public interest. This includes a demonstrated understanding of, and experience in working to address, the challenges to transformational change faced by developing countries.”

The process is not only hypocritical, it also destroys the trust and spirit of collaboration needed to manage the profound problems facing the world.Joseph Stiglitz, François Bourguignon and Nicholas Stern, former World Bank senior management

Hope for a selection process including more than one candidate received a boost when in February, the Government of Lebanon nominated Ziad Hayek to the post. However, the legitimacy of the process received a harsh blow shortly thereafter, when news site Devex detailed on 4 March the withdrawal of the Lebanese nominee, with the candidate suggesting this was due to pressure from “other governments”. The process, particularly in light of the allegedly forced withdrawal of the only opponent to the American nominee, represents a radical departure from the Board’s stated commitment to an open, transparent and merit-based process. The outcome mirrors that of 2016, with an American, in that case Jim Yong Kim, running unopposed (see Observer Autumn 2016). This result seems to confirm the fears expressed by Stiglitz and colleagues that, “Developed countries’ control of the selection process also discourages developing countries from putting forward a candidate who might have broad support among them,” limiting the pool and quality of choices available to the Board. Nadia Daar, who leads Oxfam’s engagement with the World Bank and IMF said, “You can only imagine how politically difficult a decision it must be to put forward a candidate to challenge the American nominee, meanwhile the Europeans are keeping quiet given their firm hold on IMF leadership, so how about we depoliticize this whole thing and allow anyone to apply for the job in a truly open and merit-based process?”

The selection process also contrasts with the Bank’s discourse on good governance and the need for borrowing states to adequately represent the needs and opinions of all their citizens, particularly those with least influence. To cite one example, in July 2018 the Bank launched the $12 million Open Governance Partnership Multi-donor Trust Fund, which is meant “to increase government transparency, improve accountability, and strengthen citizen engagement as well as government responsiveness.” The Bank’s 2014 Strategic Framework for Streamlining Citizen Engagement in World Bank Operations also indicates an intention to improve its own accountability to those impacted by its programmes and activities. Yet civil society stresses that much remains to be done, with persistent concerns about the unwillingness of the Bank to provide adequate remedy to communities affected by its projects, its continued lack of a human rights policy, disregard for the adequate resettlement of populations displaced by Bank-financed projects, and erosion of environmental and social safeguards (see Observer Winter 2018, Autumn 2016, Spring 2015). The hypocrisy identified by Stiglitz, Bourguignon and Stern in 2012 seems an apt description of the contrast between the above-mentioned initiatives and the process used to select the Bank’s new president.

As argued by UK-based Christian Aid in its January reaction to President Kim’s resignation, the process raises significant “issues about the global economic system and the limited role developing countries play within institutions designed to support them.” Christian Aid stressed that the current arrangement, which ensures that developed states with 12 per cent of the world’s population hold 50 per cent of the decision-making power is deeply unfair, noting that, “its policy advice may not reflect the needs of developing countries. Instead it risks interests from developed country investors and enterprises creeping into the policy choices it proposes.” It also contradicts the accepted norms of aid effectiveness, such as the Paris Declaration, and Accra Agenda for Action and the Busan High Level Forum on Aid Effectiveness, all of which stress that “partnerships for development can only succeed if they are led by developing countries, implementing approaches that are tailored to country-specific situations and needs.”

The process, particularly in light of the allegedly forced withdrawal of the sole candidate from the Global South, to which Bank activities are limited, is also contradictory to the Bank’s support for the Sustainable Development Goals (SDGs) and SDG 16 in particular, as it aims to “build effective, accountable institutions at all levels.” Also noteworthy is the contradiction with SDG 10, which aims to reduce inequality between and withing countries. SDG 10.6, in particular, commits states and international organisations to, “Ensure enhanced representation and voice for developing countries in decision-making in global international economic and financial institutions in order to deliver more effective, credible, accountable and legitimate institutions” (see Observer Spring 2019).

Frustration with the lack of input and legitimate consultation on the part of the international community – including the World Bank – led to the establishment of the g7+ group of fragile states in 2010, whose motto is “nothing about us without us.” Persistent concerns with the lack of adequate diversity at senior managerial levels at the Bank and Fund were also reflected in the G24’s Spring 2018 Communiqué, which called on both to strengthen “efforts toward addressing the severe under-representation of some regions and countries in recruitment and career progression, including at the managerial levels,” and highlighted the importance of improving staff diversity (see Dispatch, Annual Meetings 2018).

While CSOs and other critics of the selection process understand that the World Bank president is not responsible for the everyday operations of every mission, they maintain that the manner of their selection and the message sent by their background can be expected to impact the priority given by staff to the integration of the perspectives of developing state partners and ‘beneficiary’ communities into Bank programmes. Civil society argues that the internalisation of the respect for the voices of borrowers and the willingness to adapt country programmes to context-specific situations require leadership from the highest levels of the World Bank’s hierarchy, and not least, its president.

The reforms required of the selection process must now wait at least another five years. Those interested in ending the ‘gentleman’s agreement’ must now turn to the next IMF leadership contest in 2021.

Comment on the resignation of World Bank President Kim

'That position is ours': Another European to head the IMF

Appointment of the World Bank president

One man, one vote, one option: World Bank set to coronate Kim for second term