EU working to get European candidate to replace Lagarde at IMF, official says

How to choose the IMF’s next Managing Director

Lagarde’s Exit Reopens the Question: Why Does a European Always Lead the IMF?

Osborne thinks he could run the IMF. Maybe gaslighting a country is a useful skill

Symbolic vote does nothing to change Fund leadership stitch-up 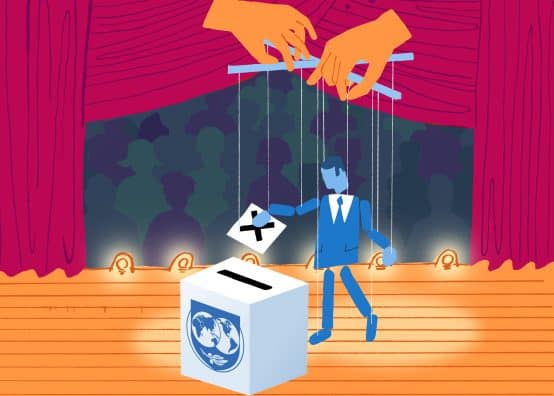 On 16 July, Christine Lagarde announced she had submitted her resignation from the IMF as managing director, effective 12 September, in light of her nomination for the presidency of the European Central Bank. In the interim, IMF first deputy managing director, David Lipton, was appointed acting managing director by the executive board. The board intends to complete the selection process by 4 October.

Handy yardstick for health of neocolonial and neoliberal system

The surprise announcement kicked off the customary speculation of potential candidates to fill the IMF leadership position and the time-honoured tradition by civil society and others of calling for the abolition of the historic ‘gentleman’s agreement’ on World Bank and IMF leadership.

The unofficial agreement, in place since the founding of the institutions 75 years ago, has ensured that the IMF has always been led by a European, and the World Bank by a US citizen (see Inside the Institutions, What is the ‘gentleman’s agreement?‘). Civil society organisations around the world have for decades pointed out that the Fund and Bank continue to undermine their legitimacy by adhering to this arrangement. They have demanded an end to the European stranglehold on the top IMF post and for it to live up to its commitment to “adopt an open, merit-based and transparent process for the selection of IMF management” (see Update 76).

If the Europeans persist in treating the International Monetary Fund as a hereditary fiefdom, they will destroy the institution.Ambrose Evans-Pritchard, Daily Telegraph

The selection of yet another European managing director immediately after this year’s appointment of US-nominee David Malpass as World Bank president (see Observer Spring 2019) would unambiguously demonstrate that the leadership succession processes at the Bretton Woods Institutions remain undemocratic, opaque and illegitimate. The expected quashing of the 15th IMF quota review – which was an opportunity to more fairly distribute voting powers at the IMF executive board (see Observer Summer 2019) – further exacerbates the Fund’s crisis of legitimacy, at a time when the adequacy of the current multilateral system is increasingly being questioned. In the words of Ambrose Evans-Pritchard of UK newspaper the Daily Telegraph, “If the Europeans persist in treating the International Monetary Fund as a hereditary fiefdom, they will destroy the institution. Global credibility will wither away.”

This year’s carousel of candidates

The Financial Times reported on 29 July that European governments put forward three candidates they are considering for the position; Jeroen Dijsselbloem, former Dutch finance minister and former head of euro zone finance ministers; Olli Rehn, central bank governor of Finland; and Kristalina Georgieva, the chief executive officer of the World Bank Group. Other names mentioned as potential candidates in various news sources include Tharman Shanmugaratnam, chairman of the International Monetary and Financial Committee, the direction-setting body of finance ministers for the IMF and Raghuram Rajan, economist and former chief economist and director of research at the IMF.

According to news outlet Bloomberg, European ministers have made clear that it is a “priority” for them to put another European in place, jointly presented by the EU and, in the words of French politician Bruno Le Maire, “without useless rivalries”. In response, Wolfgang Münchau with the Financial Times commented: “For them [Eurozone finance ministers], it is all about whether someone is from the eurozone or not, from the left or the right, the north or the south. The world needs a first-rate person to run the IMF. It should not allow Europe to treat the fund as a dumping ground for washed-up officials.”

Whether non-European governments will feel they are in a position to actually nominate candidates before the 6 September deadline remains a question. The unopposed nomination of David Malpass after the withdrawal of Lebanese candidate, Ziad Hayek, in March due to alleged pressure from “other governments”, as reported by news-outlet Devex, does not bode well for those interested in seeing a competitive race take place at the Fund. According to Mark Sobel, former US representative to the IMF executive board, “If the emerging markets don’t like it [Europe keeping the Fund job], they have to put up a credible candidate and a fight – win or lose. The US and Europe will not hand over the duopoly to them on a silver platter.”

Lagarde was appointed in 2011 when then-managing director, Dominique Strauss-Kahn, unexpectedly resigned after allegations of a brutal sexual assault against a New York hotel worker, which he settled out of court. The race came at a critical point in the Eurozone crisis talks and two weeks before the G8 Summit, creating a sense of urgency that European governments used to rush forward Lagarde as their candidate (see Update 57). That process was considered the third successive leadership race with nominal opposition to the European candidate, with Mexican Central Bank governor Agustín Carstens running against Lagarde. However, Carstens lacked the required endorsements of fellow emerging market economies to pose a serious challenge to her candidacy (see Update 76).

In a briefing prepared for the 2011 race that continues to be relevant today, civil society demanded a fair selection process and reiterated longstanding demands for IMF governance reforms, such as double majority decision-making to strengthen representation of developing countries. It argued that the right candidate “must be, and must be seen to be, wholly independent of any national or regional interest,” must have “a rigorous focus on poverty”, and be “well versed in the particular problems of low-income and middle-income countries” (see Update 75).

Long and bumpy road ahead towards transformative change

Looking forward, challenges the new IMF head will need to traverse include another looming debt crisis (see Observer Winter 2017-2018), for which it may behove international financial stability, and the credibility of the institution, to have a managing director in place who can act as an ‘even-handed’ arbiter between debtor and creditor states. The perception that Lagarde “unfailingly” opted in the Greek crisis to choose “Berlin’s favouritism over the interests of the institution she led…whose staff was adamant Greece needed an outright debt reduction,” according to former Greek finance minister Yanis Varoufakis’ July opinion piece in the Guardian, is proof of that. A January blog from the Committee for the Abolition of Illegitimate Debt that exposed secret executive board documents demonstrating that Dutch, German and French executive directors misled the board on the Greek programme, provided further evidence of the corrosive effect of the current arrangement. The leadership’s ability to handle the challenges posed to the current multilateral system, as evidenced, for example, by ongoing US-China trade tensions, will have long-lasting impacts.

In the face of the largest IMF programme in history seeming ever-more unsustainable in Argentina and potentially headed towards another insolvency crisis (see Observer Winter 2018), the new managing director will have to confront increasing calls for the IMF to change its tack on debt restructuring and forgiveness. Paired with the growing discontent by shareholders from the Global South at the lack of progress on quota reform, the new IMF head will face critical challenges for which perceptions of the institution’s legitimacy will be key. As a 2018 International Center for Monetary and Banking Studies report noted, the inability or unwillingness of a new leader to address the imbalances in the Fund’s governance structures and to enhance the institution’s legitimacy could result in a “downgrade” of the IMF’s influence as it faces the threat of a “diminishing global role” and the fragmentation of the financial system into dollar, Euro and renminbi zones.

In relation to the Fund’s work under Lagarde aimed at demonstrating the ‘softer face’ of the institution, Nadia Daar of Oxfam’s Washington Office said in a statement responding to her departure: “there is still a long way to go to turn high-level discourse into action at the country level, with many staffers still pushing policies that risk further widening the gap between rich and poor. The task for Lagarde’s successor is to take the torch and dig deeper to transform the IMF into an institution that supports stability and sustainable growth using strategies that truly and consistently help to reduce inequalities.” Whether the new managing director will take up this challenge to deliver transformative change, which is the mantra of the Sustainable Development Goals (SDGs), and seize the opportunity to truly question and realign its practices and policies (see Observer Spring 2019), in particular in relation to climate change (SDG 13), gender inequality (SDG 5), economic inequalities (SDG 10), and decent work (SDG 8), remains to be seen. Civil society will be closely watching.

For ongoing press coverage, insider information and civil society and official reactions to the IMF leadership process, follow the blogsite IMFBoss.com, a hub for discussion and debate on IMF governance, the selection process and the potential candidates.

The blog offers an open space for civil society, researchers, academics, officials, insiders and anonymous contributors to share and exchange their ideas and criticisms about the IMF’s leadership process, and is now open to new contributions and content.

EU working to get European candidate to replace Lagarde at IMF, official says

How to choose the IMF’s next Managing Director

Lagarde’s Exit Reopens the Question: Why Does a European Always Lead the IMF?

Osborne thinks he could run the IMF. Maybe gaslighting a country is a useful skill

Symbolic vote does nothing to change Fund leadership stitch-up