Is Ivanka Trump’s We-Fi initiative for women just for show?

One step forward, two steps back? Why WDR 2019 harms the World Bank’s role as a thought leader on employment and gender equality

From poverty to power

Push no one behind: How current economic policy exacerbates gender inequality

Seven reasons why feminists say no to World Bank-IMF neoliberalism 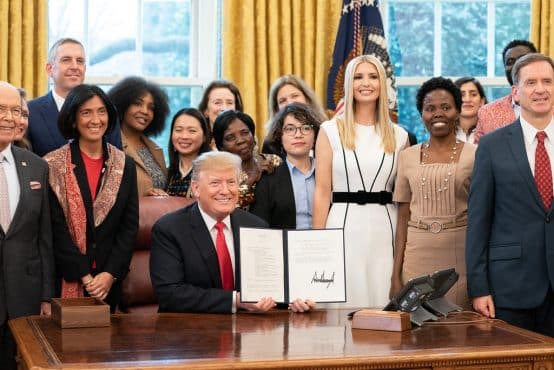 In April, the Women Entrepreneurs Finance Initiative (We-Fi), the financial intermediary brainchild of Ivanka Trump housed and managed by the World Bank, hosted its West Africa regional summit. In conversation with World Bank CEO Kristalina Georgieva, Ivanka Trump introduced We-Fi commenting, “women are the greatest underleveraged resource in the developing world,” encouraging women to “just go for it”. Georgieva praised Trump for giving the audience “the best advice from the best there is.”

Launched at the G20 Leaders’ Summit in 2017, We-Fi has since allocated its first round of funding, the bulk of which ($75.1 million) has gone to the World Bank Group, mostly to the International Finance Corporation (IFC), the private sector arm of the Bank. We-Fi has been criticised by civil society organisations (CSOs) questioning its contribution to achieving the Bank’s goal of ending extreme poverty, as its loans target so-called “high-growth women” entrepreneurs through financial intermediary lending, and are thus unlikely to reach the poorest women (see Observer Autumn 2017).

We-Fi is part of a larger shift at the Bank prioritising women’s entrepreneurship and skills development as “smart economics”, a key component of its Gender Strategy – 2016 to 2023 (see Observer Spring 2016). The new World Bank president, David Malpass has stated that “creating job opportunities for women” is a priority, emphasising his support for We-Fi. The Bank is currently supporting women entrepreneurs through several projects in borrowing countries and houses the Female Entrepreneurship Resource Point.The IFC also runs several initiatives on women’s entrepreneurship, including a joint partnership with Goldman Sachs’ 10,000 Women initiative, and WEConnect International, a partnership with “big-name, global companies”.

"The real struggle for women’s power in the economy is a struggle for a just economy.”Hakima Abbas, the Association for Women's Rights in Development co-Executive Director

At the same time, the Bank remains committed to promoting business deregulation and low corporation taxes through its Doing Business rankings and its World Development Report 2019 (see Observer Winter 2018). Women’s rights organisations WIEGO and Womankind Worldwide have continually argued that this undermines women’s access to ‘decent work’, criticising the Bank for failing to address structural constraints for women in low-paid, informal and precarious work. Sarah Gammage, from US-based think-tank the International Center for Research on Women, emphasised the importance of expanding the scope of these initiatives “to improve the terms and conditions of employment and trade. Including initiatives that enable women entrepreneurs to overcome obstacles to childcare, obtain proper identification documents, access social protection and health care and formalise their businesses and their workers´ employment status, can transform drudgery and low productivity work into decent work.”

The Bank’s focus on women entrepreneurs is part of a global trend of similar financing initiatives, including the US’s Women’s Global Development and Prosperity Initiative and several other high-profile corporate projects, such as the Coco-Cola 5×20 Program, Wal-Mart’s Women’s Economic Empowerment Program and ExxonMobil’s Women’s Economic Opportunity Initiative, as well as multi-million dollar initiatives by tech giants Microsoft and Bumble.

Hakima Abbas, of the Association for Women’s Rights in Development warned, “The enormous injection of finance for women entrepreneurship programs comes amidst a global funding crisis for women’s rights and feminist movements, which receive only 1 per cent of funds promising to support women and girls, and the decline in funding for UN treaty bodies like the Convention on the Elimination of all Forms of Discrimination Against Women (CEDAW). The same corporations that claim to support women’s empowerment often undermine gender equality through privatisation, tax avoidance, human rights abuses and the pillaging of natural resources. These initiatives are smoke and mirrors for unfettered corporate power, which divert resources away from feminist movements that create real and lasting change. The real struggle for women’s power in the economy is a struggle for a just economy.”

Is Ivanka Trump’s We-Fi initiative for women just for show?

One step forward, two steps back? Why WDR 2019 harms the World Bank’s role as a thought leader on employment and gender equality

From poverty to power

Push no one behind: How current economic policy exacerbates gender inequality

Seven reasons why feminists say no to World Bank-IMF neoliberalism