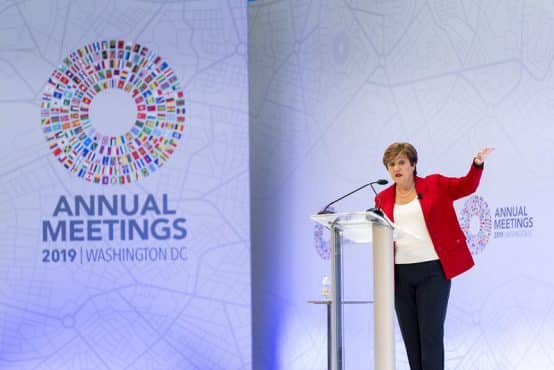 As finance ministers prepare to meet at the upcoming IMF and World Bank Annual Meetings in Washington DC from 18-20 October, the Bretton Woods Institutions (BWIs) – if not those negatively impacted by their policies – will mark their 75th anniversary amid a challenging global economic environment and a rapidly changing geopolitical landscape.

More than a decade on from the global financial crisis, rising inequality continues to cause misery as the richest hoard more wealth than ever before, while the global economy is headed towards a “synchronised slowdown.” The UN Conference on Trade and Development’s (UNCTAD) Trade and Development 2019 Report noted that, at a time when countries are failing to meet the Sustainable Development Goals (SDGs), “The world economy is heading into troubled waters, with recession in 2020 now a clear and present danger.” This year’s World Economic Forum Global Risks Report (GRR) underscored that, “Geopolitical and geo-economic tensions are rising among the world’s major powers,” and that “these tensions represent the most urgent global risks at present.”

Recognising these dire circumstances, in her maiden speech the newly-crowned IMF managing director, Kristalina Georgieva, warned that, “If the global economy slows more sharply than expected, a coordinated fiscal response may be needed.” Similarly, World Bank president David Malpass cautioned that, “In June, the World Bank Group forecast that the global economy in 2019 would grow at 2.6 per cent, the slowest pace in three years. We now expect growth to be even weaker than that.” Tell-tale signs that the global economy is wandering into another financial crisis are mounting. The yield curve inverted, as ongoing trade struggles between the US and China are heightened by the possibility of a currency war, while concerns around a potential Eurozone recession grow.

Seventy-five years after the establishment of the Bank and Fund, the world faces unprecedented challenges in a context where coordinated multilateral action is becoming increasingly difficult.

Failure on leadership processes: So much for a new multilateralism

The BWIs’ leadership contests and the expected announcement of failure of the IMF’s 15th quota reform at this Annual Meetings (see Observer Summer 2019, Update 79) should not be viewed in isolation, but through the lens of what the GRR asserts are deepening fissures in the international system” that threaten the stability of the global system. As the BWIs wrestle to stay relevant within a broader ‘crisis of multilateralism’, more attention must be paid to their own role in helping to create it (see Observer Summer 2019).

BWIs out of their depth on climate crisis

The inability of global leaders to tackle the impending climate disaster illustrates that concerns about multilateral paralysis are well-founded. Important questions remain about whether the BWIs are equipped to adapt to the rapidly-changing environment, and, in particular, whether Malpass – hand-picked by a US administration hellbent on frustrating climate action – will deliver. In fact, to the extent Malpass has acknowledged the existence of climate change at all in his six months in office, it’s mainly with respect to adaptation and disaster response. While important, this agenda largely ignores the urgent need to reduce greenhouse gas emissions, outlined in last year’s IPCC report. While the Bank’s new president may seek to bury his head in the sand on the need for rapid mitigation efforts, civil society intends to once again highlight the Bank’s role as a key financier of fossil fuel projects over its 75-year existence, including through a mobilisation due to take place outside the World Bank on Friday at noon local time, where climate groups will demand that the Bank stops funding and provide other support for fossil fuels.

After largely taking a conservative stance in recent years to establishing when and how climate issues are considered ‘macro-critical’, the Fund finds itself relatively ill-equipped to begin dealing with the potential impact of climate mitigation policies on the global economy, with outgoing Bank of England Governor Mark Carney warning that a chaotic shift to a low-carbon economy could result in a ‘climate Minsky moment’, i.e. a sudden collapse of carbon assets (see Observer Summer 2019). CSOs will be pressing the Fund on its plans to deal with climate risk from what energy analysts at Carbon Tracker have dubbed the ‘inevitable policy response’ to climate change; they will also demand that the Fund and other multilateral actors acknowledge the need for debt relief for countries who are increasingly affected by catastrophic storms super-charged by a climate breakdown these same countries did little to cause.

The Bank’s Maximizing Finance for Development (MFD), which explicitly privileges the private sector in development finance, remains a mainstay of the Bank’s approach (see Observer Summer 2017). UNCTAD’s report captures the continued reliance on market-based solutions, describing it as “tapping the hearts, minds and wallets of the moneyed elite.” The private sector bias prevails despite ample evidence of the dangerous equality and fiscal impacts of key elements of its approach, including public-private partnerships (see Observer Summer 2019). The findings of April’s Overseas Development Institute report, which stressed that efforts to increase development finance through ‘blending’ of public and private funds are not credible, even under its own premises, continue to be ignored. The report found projections on how much private finance could be catalysed “unrealistic” and that “every $1 of public money invested in this way mobilises just $0.37 of private finance in LICs [Low-income Countries] and just $0.75 in all developing countries.” Given Malpass’s 1980s-like references in his recent speech on the wonders of liberalisation and the power of entrepreneurship, this privatisation train is unlikely to change course anytime soon.

Civil society will be closely following developments of the 19th replenishment of the International Development Association (IDA, the World Bank’s low-income lending arm). Donors to and borrowers from IDA will meet immediately after the Annual Meetings to finalise the IDA19 policy framework and further discuss funding (see Observer Autumn 2019). Unfortunately, many will be following from afar as the mechanisms for substantive discussions between civil society, IDA Deputies and borrowing countries remain inadequate. Challenges notwithstanding, civil society will call for more ambition in the ‘Special Themes’, such as the Jobs and Economic Transformation, and hopes to see progress in addressing concerns about IDA’s Private Sector Window. As the World Bank released its draft strategy on Fragility Conflict and Violence (FCV, see Observer Autumn 2019), it continues to be an increasing focus of the Bank and Fund, including in IDA19, as reflected in the numbers of panels dedicated to it at these Annual Meetings.

The most recent World Bank analysis revealed that external debt stock of low- and middle-income countries rose 5.2 per cent in 2018 to $7.8 trillion, and that by the end of 2018, the debt stock of IDA countries more than doubled from a decade earlier. These developments are taking place as a colossal shadow banking sector swells, amid equity market instability and rising levels of household debt throughout the world.

Most recently, debt campaigners have accused the IMF of encouraging reckless lending by extending $93 billion in loans to 18 financially troubled countries. The Fund’s recent role in Argentina, for example, raises questions around whether the institution has learned from the past, and whether it can fulfill its institutional mandate of ensuring financial stability. After overseeing the worst debt crisis in the country’s history in 2001, Argentina has once again fallen into a technical default, after the IMF increased its initial loan to $57 billion in September 2018, making this its largest-ever loan programme (see Observer Winter 2018).

Seventy-five years after the establishment of the Bank and Fund, the world faces unprecedented challenges in a context where coordinated multilateral action is becoming increasingly difficult. That said, given the current multilateral system and its well-documented imbalances are in part responsible for the crisis to which it must now respond, support for the status quo is clearly not an option. The 75th anniversary of the BWIs provides those interested in fundamental reform an opportunity to consider the legacy of these pivotal institutions, as well as what better a better international system may look like.

In an effort to facilitate these important discussions, the Bretton Woods Project, together with Georgetown University’s Center for the Advancement of the Rule of Law in the Americas (CAROLA) and the Bank Information Center, warmly invites you to a one-day conference on 21 October to consider possibilities for reform to build a more just and ecologically sustainable global economic order (RSVP here).