The IFC at fifty: All that glitters is too much gold

The World Bank and IMF at sixty: plus ça change? 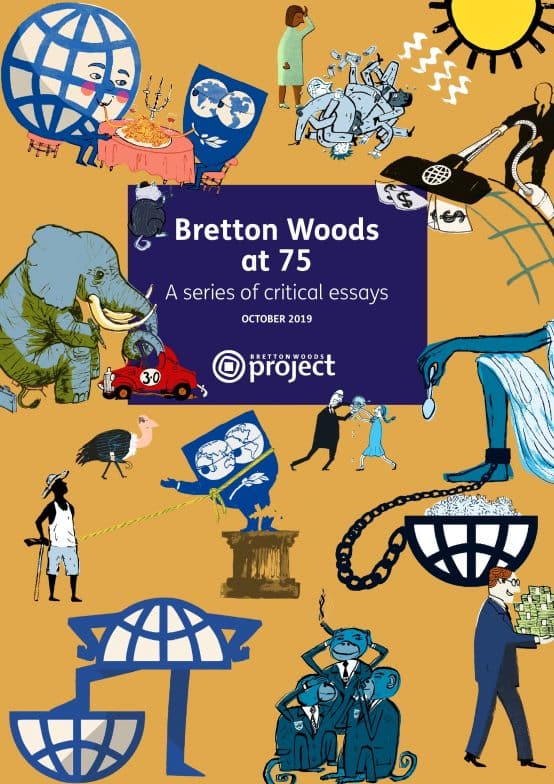 The cover of this volume shows a montage of just a few of the many illustrations by Robin Heighway-Bury that have appeared on the cover of the Bretton Woods Observer from 2004 to present. 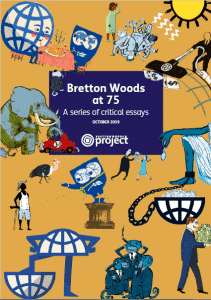 II. International financial institutions and the elites of the Global South: Perspectives from Brazil, by Ana Garcia and Fabrina Furtado

IV. The World Bank and the environment: A legacy of negligence, reform, and dysfunction, by Bruce Rich

V. Struggle and resistance against the IMF and World Bank at 75, by Mae Buenaventura

The Bretton Woods Project is pleased to present this edited volume, Bretton Woods at 75: A series of critical essays. The collected contributions of this volume provide a rebuttal to the notion that the World Bank and IMF have been acolytes of progress and poverty reduction since their creation at the Bretton Woods Conference 75 years ago. Rather, the contributors to this volume seek to document some of the most onerous and embedded institutional shortcomings of the Bretton Woods Institutions. These insights are vital, not only in terms of delivering an assessment of the BWIs’ diamond jubilee anniversary, but in debating how to reinvigorate a multilateralism that is fit for purpose in the 21st century. In order to address this challenge, we must grapple with the overlapping challenges of global economic tensions, rising inequality, the growing climate catastrophe, and the rapid erosion of fundamental human rights. This volume helps to elucidate the BWIs’ role in the current ‘crisis of multilateralism’ by structurally undermining democratic governance and human rights, while destroying the environment. The volume also considers the importance of civil society in challenging the World Bank and IMF. It explores the birth of progressive organisations in the Global South that have sought to hold the BWIs to account for their role in perpetuating a deeply unequal global economic world order.

The first contribution, written by University of Witwatersrand professor Patrick Bond, assesses the BWIs’ role in the current ‘crisis of multilateralism’. Bond notes of the Bank and Fund, “Unfortunately, today, the adverse balance of political forces confirms that neither is a sure terrain on which to wage battles for social progress and environmental preservation. What’s needed is a change in power relations.” He adds that, “While the situation is dire and the challenges considerable… history provides room for hope in collective action.”

International financial institutions and the elites of the Global South: Perspectives from Brazil

The second contribution, from Ana Garcia and Fabrina Furtado, both International Relations faculty members at the Department on Development, Agriculture and Society at the Federal Rural University of Rio de Janeiro, Brazil, analyses the BWIs’ impact on systems of democratic governance, using their home country of Brazil as a case study. Garcia and Furtado show the BWIs’ ability to both constrain the promise of progressive politics as well as to build alliances with domestic elites to support reforms that have negative social and environmental consequences. They argue, “In Brazil, as elsewhere, the rise of the far-right government can be traced to the democratic governance deficit resulting from the inability of the state to construct more equitable relations of power when faced with opposition from local and international elites, acting in part through the BWIs.”

The third essay, by Celine Tan, a Reader in Law at the University of Warwick, assesses how the overarching neoliberal character of the IMF and World Bank acts to undermine human rights. It traces the influence of the institutions in guiding macroeconomic policy at an international level and in shaping the global financial architecture, and linking the practices involved in this to the corrosion of human rights and the unwillingness of the institutions to act in accordance with internationally agreed human rights law. Tan writes that, “the Bank and Fund remain largely insulated from the conventional norms of accountability, including adherence to international human rights norms.”

The fourth contribution, from Bruce Rich, a former attorney the Natural Resources Defense Council and the Environmental Defense Fund, looks at the World Bank’s environmental legacy. Rich concludes, “The Bank’s environmental legacy is one of cumulative, avoidable ecological and social harm, followed by policy and procedural reforms adapted mainly in response to outside pressure and protest, and generally poor implementation of these reforms. This dysfunction is rooted in a perverse institutional culture of loan approval and pressure to lend.” He argues that until the Bank’s shareholders prioritise lending quality over quantity, little will change.

Struggle and resistance against the IMF and World Bank at 75

The final contribution, from Mae Buenaventura of the Jubilee South Asian Peoples’ Movement on Debt and Development, catalogues grassroots resistance to the structural adjustment programmes of the 1980s and 1990s, which culminated in mass anti-debt activism and are manifested in continued resistance today. Buenaventura notes, “Debt movements advocated for critical, participatory, transparent and comprehensive examination of public debts by states and citizens as part of the call to repudiate and cancel illegitimate debts, and in the long run, sever the chains of paying burdensome and unacceptable debts.”

Together, these contributions provide a critical lens through which to view the legacy of the BWIs at 75. We hope they will help stimulate a fresh discussion about how to transition to a 21st century multilateralism that sees democratic governance, human rights and protection of the environment as core principles, rather than window-dressing for growth-based, extractivist development.

The IFC at fifty: All that glitters is too much gold

The World Bank and IMF at sixty: plus ça change?