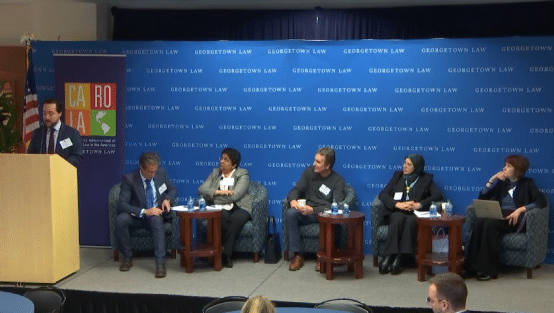 On 21 October the Georgetown University Law CAROLA, BWP and the Bank Information Center hosted a one-day conference entitled Bretton Woods at 75 and the future of multilateralism.

On the occasion of this year’s 75th anniversary of the World Bank and the IMF, on 21 October the Georgetown University Law Center for the Advancement of the Rule of Law in the Americas (CAROLA), the Bretton Woods Project (BWP) and the Bank Information Center (BIC) hosted a one-day conference entitled Bretton Woods at 75 and the future of multilateralism. The event, which was widely attended, provided civil society, academics from the diverse fields and former World Bank, World Trade Organisation and IMF officials an opportunity to explore the legacy of the BWIs, with a particular focus on whether they have adapted their policies to address key short-comings in their approaches since their establishment (see BWP briefing, Bretton Woods at 75). Within the context of the current crisis of multilateralism, the discussion also provided participants an opportunity to consider responses to the nationalist backlash and to begin to better articulate a vision of a multilateral system that goes beyond the current deeply flawed economic order, including whether to ‘fix’ or ‘nix’ the BWIs.

While the discussion was wide-ranging, key themes concerned the disconnect between policies supported by the Bank and Fund, particularly since the 1980s financial deregulation, and the stated aims of the Bretton Woods Conference to support full-employment and global financial stability by providing states significant autonomy and policy space. The erosion of policy space brought about by the increasing reliance on capital markets, deregulation and restrictions in the trade regime were seen as substantial barriers to bringing about the economic structural transformation required to address the climate emergency and other development challenges, which require strong state leadership to discipline capital. While former IMF, WTO and World Bank officials acknowledged that some mistakes were made, particularly in the initial implementation of structural adjustment programmes in the 1990s, they argued that the institutions had largely learned from those mistakes. This was challenged throughout the day, with many participants highlighting the continued damage of their polices, as currently seen for example in Tunisia, Argentina and Ecuador, and the inability of the institutions to robustly rebut claims that their policies bear a large degree of responsibility for the woeful performance of most developing countries since the 1980s, where some claim, the bulk of progress made in poverty reduction is due to China’s growth, which decidedly did not follow Bank and Fund policy prescriptions.