Shut out of IDA19, civil society organisations disappointed with proposals 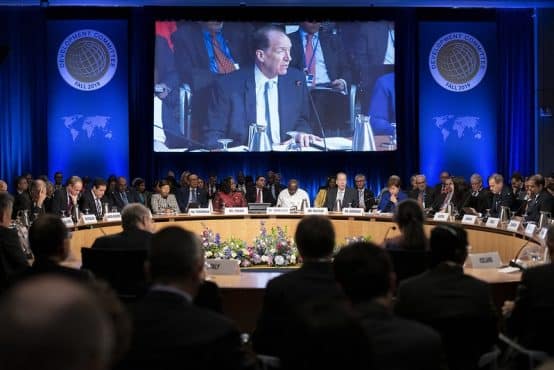 The Development Committee met in Washington on 19 October during the World Bank and IMF Annual Meetings. The Committee’s mandate is to “advise the Boards of Governors of the Bank and the Fund on critical development issues and on the financial resources required to promote economic development in developing countries.”

The Development Committee’s communiqué, echoing that of the G24, began by emphasising “subdued” global growth this year, and highlighting the slow pace of investment and trade, as indicated in this year’s World Economic Outlook (WEO). In the face of an impending global financial crisis, the WEO noted the “precarious global outlook”, underlining the projected slowdown of growth in the United States and China, and “elevated” downside risks like trade barriers and heightened geopolitical tensions, including Brexit-related risk.

Despite concern over mounting risks, the Committee gave the global debt crisis only a cursory glance, calling for a “multi-pronged approach with borrowers and creditors to address the increase in debt vulnerabilities in emerging and low-income economies and to “promote sustainable and transparent borrowing and lending practices.” Though the IMF’s figures show that almost half of countries are currently in, or at ‘high risk’ of, debt distress, there was no mention of restructuring, and civil society calls for a debt workout mechanism were once again ignored. This comes as the IMF faces criticism for reckless lending and for its role in Argentina’s technical default after the country received the Fund’s largest-ever loan programme last year (see Observer Autumn 2019).

The communiqué further pushed for “increased support” for fragile and conflict-affected settings, to which the World Bank has doubled its lending and grants over the period from 2014 to 2018, and welcomed the Bank’s forthcoming fragile conflict and violence (FCV) strategy. However, the draft of the strategy was met with concern over the lack of reflection over the impacts of neoliberal policies on the drivers of conflict and fragility (see Observer Spring 2019), and the limitations of the Bank’s Maximizing Finance for Development approach in FCAS has been well-noted, as has its skewed staff incentives (see Observer Autumn 2018).

On the International Development Association (IDA), the World Bank’s low-income arm, the Committee welcomed the upcoming 19th replenishment, which is currently under negotiation and set to conclude in Sweden in December. It called the proposed policy commitments an “ambitious agenda”, a reading out of step with civil society disappointment in the policies and process, especially the lack of transparency and exclusion of civil society organisations (CSOs) in IDA countries (see Observer Autumn 2019).

As with last year, the communiqué stressed the role of private sector-led development, praising the International Finance Corporation for providing “private sector solutions while maximizing development impact”, an oxymoron by current standards (see Observer Summer 2017). Despite recent moves by the IFC to address concerns with the IDA Private Sector Window, the Committee’s call on IFC to “facilitate and expand investments,” particularly in IDA and FCV countries, in line with the former’s capital package, will do nothing to quash concerns that the Bank is moving in the wrong direction (see Observer Autumn 2019).

It highlighted the Bank’s new Jobs and Economic Transformation (JET) paper, which it states will, “address labor [sic] demand and supply constraints” and “spur private investment”, as well as the 2020 World Development Report – Trading for Development in the Age of Global Value Chains. The Bank and Fund’s approach to (worsening) labour standards has been a source of tension for decades, with the CSO reaction to the World Development Report 2019 (see Observer Winter 2018) and response to the new White Paper on targeting social protection recent flash points. As the Global Unions statement to the Annual Meetings made clear, the two institutions must do much more to support countries to build stronger labour market institutions and “prioritise full employment with a labour protection floor to ensure quality jobs for all those seeking employment.”

With no apparent sense of irony, the Committee reiterated, “the importance of the World Bank Inspection Panel and the IFC and MIGA Compliance Advisor Ombudsman [CAO] in enhancing development outcomes,” at a time when the Bank’s board has failed to give monitoring and dispute resolution functions to the Panel, with its long-running review remaining incomplete (see Observer Autumn 2019). In light of this, all eyes are on the CAO’s upcoming review, especially given the Supreme Court ruling overturning IFC’s absolute immunity from suit in the US in February (see Observer Spring 2019).

This year’s communiqué was light on the climate side, perhaps owing to the Bank’s new president’s lukewarm approach to the issue (see Dispatch Annual Meetings 2019). As the Bank prevaricates over whether it is aligned with the Paris Agreement or not, the Committee reiterated that it should “continue to deliver on its Climate Change Action Plan.”

It concluded by congratulating former World Bank Chief Executive Kristalina Georgieva on her selection as Managing Director of the IMF, in what has been described as a “flawed process maintained as an economic foreign policy tool” (see Observer Autumn 2019).

Shut out of IDA19, civil society organisations disappointed with proposals